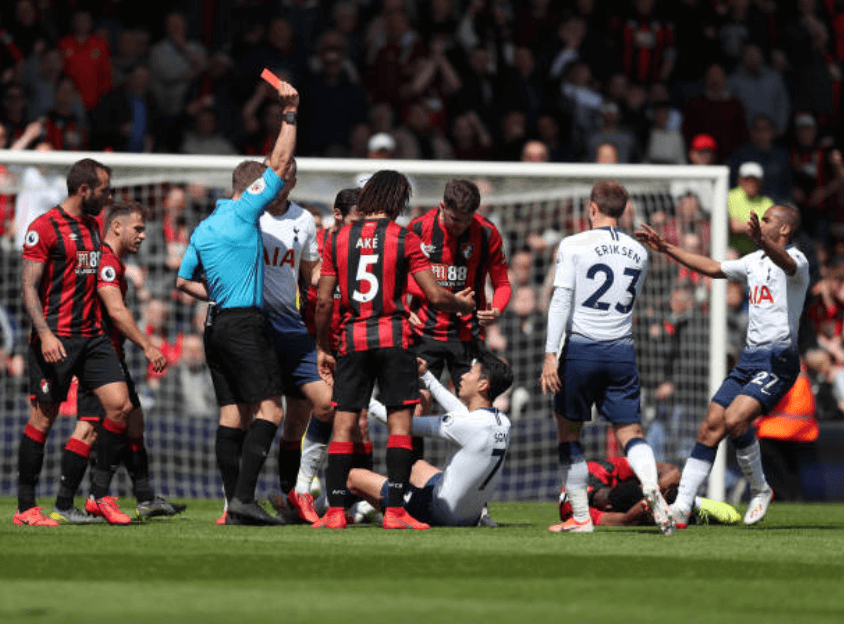 A truly bizarre game of football ended in Bournemouth’s first ever league win over Tottenham after two red cards amounted to one of the most riveting one-nil’s you’re likely to see.

It was going fairly smoothly for Spurs for most of the first half in their efforts to secure Champions League football next year. No goals were scored, but that was mostly due to an excellent debut performance by 19-year-old goalkeeper Mark Travers. However, the events that followed meant that Travers didn’t have a chance to excel in the second half.

Throughout the first half, Spurs fans would have been concerned about the way Eric Dier was going in for challenges – the Englishman easily could have been dismissed for a second yellow on a couple of occasions. However, it was Spurs’ main man this season who was the one to be issued a red card. Heung-min Son’s uncharacteristic violent push on Lerma was enough to sway Craig Pawson to send the South Korean off for a straight red offence.

Soft or not, Pochettino rightfully had to make a couple of changes at half time – Dier off for Wanyama and Alderweireld for Foyth. Extraordinarily Foyth, who had been on the pitch for little more than two minutes, went in for an uncontrolled slide tackle on Jack Simpson with his foot high and his studs up, giving the referee no choice but to send off the Argentinian, leaving Spurs with nine men for most of the second half.

In fairness, the remaining Spurs players did well to protect the goal after their teammates’ senseless actions. That was until a string of corners started to present chances for Bournemouth in the dying minutes of the match, as the Tottenham players were getting outnumbered in their own box. Ake sliced through the defence unnoticed and headed into the goal with four minutes of stoppage time to go.

This strange result doesn’t mean a great deal to Eddie Howe’s team but could be hugely significant to Pochettino’s men, who have failed to secure Champions League football for next season and may need to win against Everton on the final day.

An uncharacteristic lack of discipline

An extraordinary game was compounded by some peculiar actions by a few Spurs players. Heung-min Son decided to shove Lerma with the referee a few meters away, and the South Korean can have no complaints for his red card. Luckily for Tottenham, Son will still be available for their crucial Champions League match on Wednesday, but will miss the next three Premier League matches, carrying into next season.

Juan Foyth clearly wasn’t ready to lunge into a slide tackle after being on the pitch for just two minutes. Although he apologised after the incident and there may not have been any malicious intent, Craig Pawson had a clear view of the incident and again had no choice but to issue a red card.

So Spurs were severely depleted with most of the second half still to play, but truthfully were lucky to even have nine players on the pitch – Dier’s shambolic first half antics could have resulted in an early bath on two occasions. A slide tackle which prevented a Bournemouth break would have surely been a second yellow if Craig Pawson hadn’t believed Dier got a touch on the ball. Bournemouth were denied a pretty stonewall penalty later on too with Dier the culprit once again. Pochettino sensibly took the 25-year-old off at half time after his uneasy first half on the South Coast.

A chance for a record points tally

Three points for Bournemouth now take them onto 45 points in total – one behind their best Premier League tally with a game against Crystal Palace to play. Although they won’t be able to climb any higher than 12th place, Bournemouth have gone another successful season without really being involved in a relegation battle.

The Cherries aren’t renowned for their consistency in results throughout any season, but more often than not end up comfortably surviving each year. Eddie Howe is now one of the most established managers in the league now and seems to be improving his side one step at a time, with some top-class players really shining through.

So is it time for Bournemouth to be aiming for the top half of the table? The partnership between Wilson and Fraser is amongst the most effective in the league and if Howe can hold on to the two attackers, the pairing could be critical for improving the Cherries’ points tally even further next season.

There was a time not too long ago when Spurs were considered as title challenges along with City and Liverpool. A pretty dreadful results record this side of Christmas though meant that the Lilywhites were dragged into a top-four battle.

And until this game they were in the driving seat – a win against Bournemouth would have secured a top-four finish, but some unfavourable results could leave Spurs in sixth position by the end of the 12th May – a pretty terrible prospect for a team of such stature in recent years. The very suggestion of not getting Champions League seemed close to impossible for Spurs not too long ago, but a loss in their final match to Everton could dramatically compromise their league season.

The only consolation to Spurs is that the other teams chasing top four are making a hash of things as well. However, this could only amplify their disappointment at not finishing the job off when playing a team that they had scored 22 goals against in their previous seven Premier League meetings. Everton is another team that usually suffer at the hands of Spurs, but confidence is low and that could play a huge part on the final day.

A day to remember for Mark Travers

Travers’ clean sheet was truly inspiring to any young goalkeepers hoping to break through in the Premier League, or any other league for that matter. Especially in the first half, he made some fine saves when faced with shots from Lucas and Alli, who looked like they would certainly score at some point in the match.

Obviously the two sendings off dramatically reduced the amount of work that Travers had to do between the posts, but the 19-year-old achieved a debut clean sheet all the same against a top club known for peppering the Cherries in the past.

The teenager has made a number of appearances for the Irish national youth teams, as well as remarkably scoring a goal for Weymouth on his senior debut while on loan. With his fellow keepers at the club both in their thirties, perhaps Travers could be the breakthrough goalkeeper in the next few years.

Spurs with a lot on the line

The way that certain players acted in Saturday’s match is even more outlandish when you think about what a win could have done for the team. Not only would it have secured Champions League football for next season, it would also have meant that Spurs were guaranteed to finish above arch rivals Arsenal, not to mention the confidence it would have brought the team ahead of their crunch Champions League semi final tie.

I’m sure the minds of many Spurs fans will be fearfully drifting back to a certain 5-1 defeat at the hands of already relegated Newcastle three seasons back, which meant that Arsenal clinched second place ahead of them on the last day of the season. There’s a real danger of something similar happening this season, except there is more on the line than pride this time.

It’s only because of the misfortunes of Arsenal, Chelsea and Manchester United that Spurs still sit in third. Tottenham have lost 13 games this season, Liverpool just one, yet the Reds sit one place above Spurs. Champions League football is still just about in their own hands, but is hanging by a thread at the same time.

Man of the Match – Ryan Fraser

The two red cards may have been the catalyst to allow Ryan Fraser to be a menace to Spurs’ defence down the right, but Ryan Fraser was the Bournemouth player who tried the hardest to capitalise on their numerical advantage. The Scotsman created a number of big chances and ultimately got his reward with an assist for the winning goal.