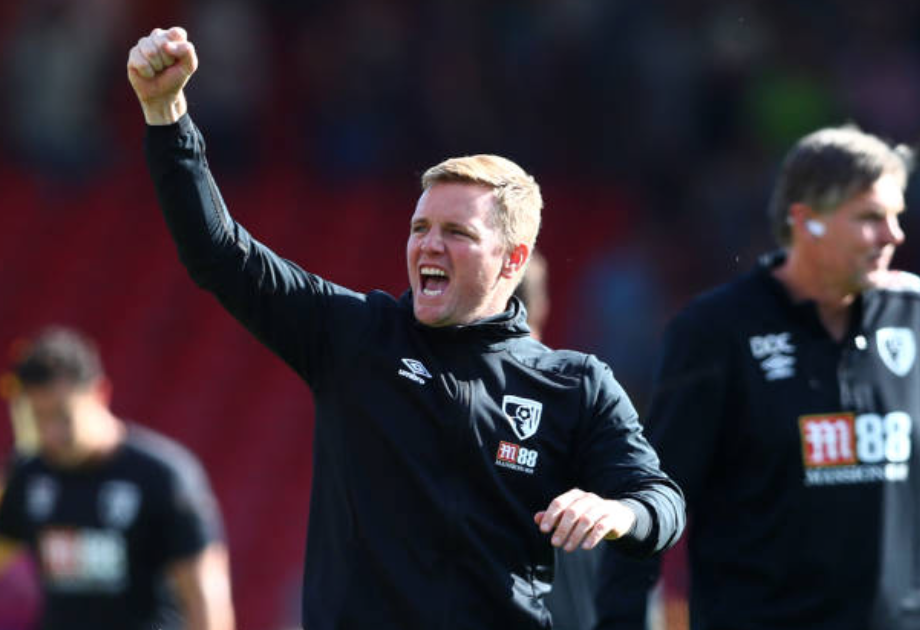 Having lost their previous two league games, against Leicester and Manchester City, the Cherries kick-started their campaign with a thoroughly deserved first home league win, lifting them to eighth in the table.

“Psychologically, it was hugely important to win that first home game which is why today was a huge moment in our season,” said Bournemouth manager Howe. “We took our chances when the game was in the balance.”

Substitute Ryan Fraser made it 2-1 from a low free-kick which appeared to come off Fabian Delph on its way into the net before Wilson made it three goals in two games with a delicious lob past Jordan Pickford.

Callum Wilson back to his clinical best

The England striker had just two chances in the match and he took them both, showing brilliantly predatory instincts for the first and huge levels of skill for the second. Both Michael Keane and Yerry Mina had days to forget while Fabian Delph didn’t provide much protection in front with Wilson punishing their lacklustre levels. Since the start of last season, only Manchester City’s Raheem Sterling (32) has been directly involved in more Premier League goals amongst Englishmen than Wilson (26 – 17 goals, nine assists).

On a weekend when Tammy Abraham scored a hat-trick for Chelsea to push his claim for an England place, Wilson gave Three Lions boss Gareth Southgate a timely reminder of his own capabilities in front of goal.

While his first goal was scrappy, his second – which sealed the points – was a sumptuous finish past England’s number one keeper after Everton’s defence had been caught cold.

“Callum took his goals really well and he pressed really well,” added Howe. “He was an all-round threat and his second goal was a brilliant finish.”

Everton have a soft center and Silva has his hands full

Marco Silva’s side far too often have flattered to deceive and were ultimately well beaten at the Vitality again. “There’s a big frustration because we lost the game and gave some things too easily to our opponent,” said Silva.

“Bournemouth not only won the first ball, they won the second and the third.” “We have a lot of work to do – we have to be more clinical, more aggressive and more solid because we cannot concede goals as easily as we did.”

Silva had opted to drop Moise Kean, the 19-year-old Italy forward signed for an initial fee of £25.1m in the summer. His replacement, Calvert-Lewin, was denied by Ramsdale when the game was goalless and cancelled out Wilson’s opener with his first goal in 971 Premier League minutes following Richarlison’s cross.

Richarlison also hit the bar before the opening goal and had one final chance to score after Wilson made it 3-1. The Brazilian forward had the chance to ensure a nervous finish for Bournemouth after Ramsdale had beaten away Alex Iwobi’s attempt but, on an afternoon to forget for the Toffees, he put the opportunity wide.

Aaron Ramsdale is deservedly Cherries’ no.1

He was called upon multiple times, first to keep out Sigurdsson’s shot at the start of the second half with the Cherries goalkeeper helping it over the crossbar. He then came to the Cherries’ rescue having been sold short by Steve Cook’s backpass as he saved from Calvert-Lewin after he had nipped in.

Everton have now conceded seven goals in their past three league games, as many as they had in their previous 13 Premier League fixtures.

Marco Silva stood in his technical area with his arms outstretched, wondering what on earth was going on in Everton’s defence. Just how were they so wide open?

Diego Rico’s simple ball had split his all at sea backline and Silva’s gesture was one of a man who knew what was coming. It duly did. His worst fears were confirmed when Callum Wilson raced through hand-applied the finishing touch to claim his second of the game and third of the day for impressive Bournemouth and that was that.

Silva turned away, throwing one of those previously outstretched arms up in disgust before slumping back in his seat in the dugout. It was the third time his defence had been properly punished for their slackness. This one meant it was game over and confirmed more away-day blues for the Blues.

Silva finally saw his side score their first league goal on the road, a rare goal too from Dominic Calvert-Lewin.

A third away game without a win, though, highlighted the problems Everton will have to find a solution to if their latest spending spree – over £120m this summer – is going to turn into anything tangible. They would have gone third, albeit briefly, with victory at the Vitality Stadium.

No doubt increasing Silva’s frustration will be the fact that travel troubles are also nothing new.

Bournemouth travel to Southampton on Friday Night Football in a feisty South Coast derby whilst Everton host Sheffield United at Goodison on Saturday.