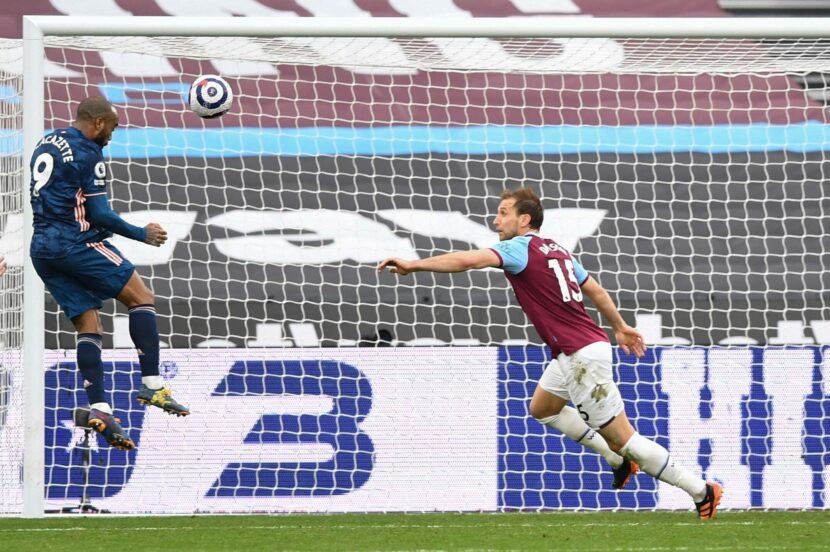 Despite a limited Premier League programme this weekend, viewers were treated to one of the games of the season on Sunday lunchtime as West Ham and Arsenal played out a thrilling 3-3 draw. Whilst a score draw had been foreseen by this very website, the manner of the match itself was anything but predictable.

As Tomas Soucek stabbed home to put the Hammers three goals to the good after just 32 minutes, Twitter was flooded with comments mocking Arsenal’s ability to somehow take the focus off rivals Tottenham’s harrowing defeat in Zagreb earlier in the week. With captain Pierre Emerick Aubameyang not registering an attacking touch and totalling four sprints in a dire first-half display it looked as if avoiding total humiliation was becoming the order of the day. Alaxandre Lacazette had other ideas.

Although eventually credited as an unfortunate Soucek own goal, Lacazette breathed life into a hopeless Arsenal side when his smart snapshot found the net on 38 minutes. His movement in the box and composed control juxtaposing the vast majority of his side’s opening half offering.

His second half was vintage. The 29-year-old Frenchman demonstrated all of his experience as he led from the front, offering a constant outlet and occupying the Hammers’ now creaking backline. His presence in the box may have pressured Craig Dawson into slamming Arsenal’s second into his own net, but there was absolutely no doubt of Lacazette’s role in the equaliser. Pepe’s cross, stood up to the back post, was headed emphatically past Lucasz Fabianski to give Arsenal the unlikeliest of points.

It was interesting timing that Aubameyang had been substituted so recently before the equaliser that he ended up back on the pitch celebrating with his team. The camera lenses, though, were firmly focused on the in-form striker who had revived Arsenal with a virtuoso display. Perhaps not a changing of the guard, but certainly a reminder that Alexandre Lacazette is no less valuable to his club than his headline-grabbing teammate.

The striker stated afterwards; ‘I’m proud of my team for coming back.’ The ‘my’ may not have been intended to suggest ownership but with every positive performance and goal scored in recent weeks, Arsenal are increasingly becoming Lacazette’s team to lead. “That was probably the best that I have seen us play,” purred manager Mikel Arteta about Arsenal’s closing 60 minutes of the game. He will be well aware that the man spearheading his attack was the primary reason his team returned to the Emirates with a point to show as a reward for their efforts.