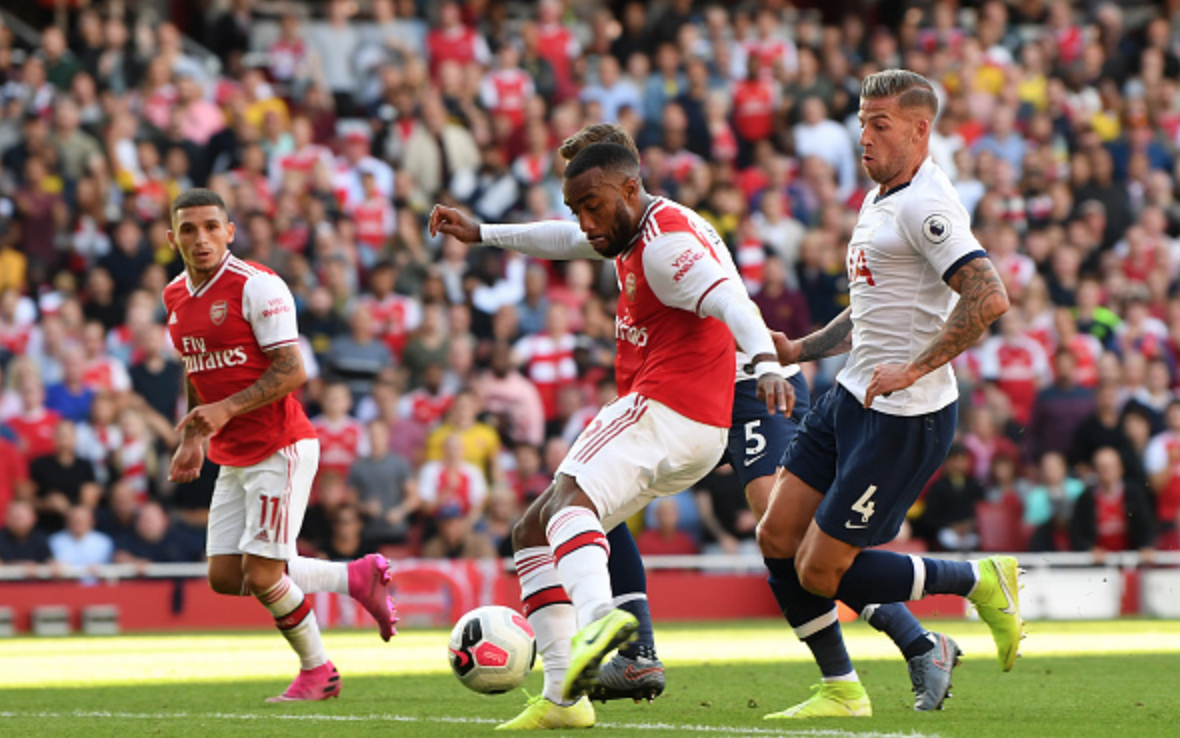 The North London derby – it rarely fails to live up to the hype, and the most recent meeting between the two on Sunday was no different as both teams displayed their desire to attack in 90 minutes of back-and-forth exchanges.

Arsenal came back from two goals down against Tottenham to ensure the spoils were shared at full-time. It was an enthralling spectacle, filled with tension, as well as passion. The Emirates stadium was rocking at the start of the match, but fell silent when Bernd Leno fumbled the ball into the path of Christian Eriksen only ten minutes into the match.

It appeared as though Spurs were going to claim the bragging rights when Harry Kane rifled home a fierce penalty into the bottom corner to double Spurs lead on 40 minutes, following a undeniabley clumsy challenge from Granit Xhaka. The anxiety around the stadium built, with fans becoming restless. The home side needed a goal, and they needed it soon.

Enter, Alexandre Lacazette. The Frenchman latched on to Nicolas Pepe’s pass, before ruthlessly lashing the ball home on the stroke of half-time. There was hope.

The Gunners came flying out of the traps after the break, with each player showing a greater intensity and speed. They continued to pepper Hugo Lloris’ goal, but the final pass was missing. Once again the Gunners fans became restless, especially as Mauricio Pochettino’s men continued to pose a real threat on the counter attack looking like they could snatch the win.

The game was crying out for a moment of magic, someone who could provide that bit of quality – and it came from Arsenal’s Matteo Guendouzi. The youngster – who has been called up to the France squad this week – picked up the ball and spotted Pierre-Emerick Aubameyang’s run, before playing a sublime cross that allowed the striker to deftly poke home.

The hosts continued to press for the winner, but ultimately had to settle for a point. A gripping spectacle, with plenty of positives for Unai Emery’s men. After the pre-match talk that suggested that Arsenal had the squad to beat Spurs and reclaim their title as the best London team in the Premier League the result was fair. The Gunners had the chances to take all three points but Spurs’ lethal counter attacking football caught Arsenal out and they were the better team for the first 45.

The 2-2 draw may have been disappointing for fans but it has shown Premier League fans that the competition for the top four spots is as fierce as ever.

The blossoming and fierce front three

The North London derby represented the first occasion in which Aubameyang, Lacazette and Pepe started together. And each player was directly involved in one goal for Arsenal – Pepe feeding Lacazette for their first, before Aubameyang bagged the leveller.

There have been comparisons between this front three and that of Liverpool’s attack, with Arsenal’s Gabon international speaking up on his excitement while also likening the two. The trio’s potential is ominous, after they each put in dazzling displays to help get their side back into the match.

The pace on the wing is frightening, while there is an undoubted constant goal threat with the three of them all proving that they are clinical in the final third. Pepe had seven shots in total, and was unlucky to not find himself on the scoresheet – but the promise is there. The tireless work ethic of Lacazette, combined with the threat that they all pose going the other way will ensure that fans can expect plenty of goals from them moving forward.

The match didn’t begin in the way Emery would have liked, finding his side two goals down after 40 minutes. It was world-class striking play by Lacazette to pull the Gunners back into contention and give them a lifeline as half-time loomed. However, something needed to change.

Following the restart, the home side began to peg Tottenham back, retaining possession and sustaining attacks. The midfield looked more composed and they began to attack the weak links of the Spurs defence – Davinson Sanchez at right-back and a tiring Danny Rose at left-back. It was a sign of this Arsenal team coming of age as they were able to not let their emotions get the better of the them in a heated derby. Instead, they were fuelled by falling behind and showed desire and intelligence as they went in search of redeeming themselves.

All of a sudden, Sead Kolasinac was staying further up on the left wing and this meant Spurs’ Sanchez was struggling even more. Guendouzi began to test the resolve of the midfield, as he made marauding runs and played piercing passes through the heart of the opposition. It was the 20-year-old’s wonderful ball that put Aubameyang in – a mature performance.

The manager was forced to take off Lacazette due to injury, but this didn’t halt the momentum. Once again, the ability to adapt with Aubameyang moving into the striking role shows that Emery has numerous options at his disposal. He also had the luxury of bringing on an on-loan Real Madrid midfielder in Dani Ceballos. This saw Arsenal shift from a rather defensive 4-3-3 formation to a more attacking one, with the Spaniard playing a little further up the pitch.

Who were the standout performers?

Matteo Guendouzi – The midfielder arguably had his best game in an Arsenal shirt. It was a mature, accomplished, technically astute and exciting performance from the midfielder. With Xhaka and Torreira struggling to make an impact, the youngster stood up and made the difference.

Alexandre Lacazette – The French forward was tireless in his work, and he was frequently seen charging back to prevent a Tottenham attack. His whole game was assured and accomplished, with his expertly taken goal the highlight of his performance. Unfortunately for Gunners fans, he was subbed off due to injury but it is believed to not be that serious.

Dani Ceballos – The on-loan midfielder was sensational when he entered the pitch and he changed the dynamic of the match. Ceballos’ ability to dictate the tempo of the match was crucial in allowing his side to continue to sustain pressure. While the other players were frantically searching for a winner, he was composed and assured in his work. The Spain international’s creativity, technical ability and his precision will see him become an invaluable asset to Emery.

Nicolas Pepe – The forward occupied the right wing and was constantly looking to take on Danny Rose at any opportunity. The Spurs man was suffering heavily from fatigue by the end, as Pepe ran him into the ground. Although the new man was unable to grab a goal, he was direct and was tireless in his work in both directions.

Yes, the Gunners put in a strong showing to salvage a point at the weekend. But, there is still room for improvement. The defence looked penetrable throughout the match, with Leno and Sokratis both at fault for the opener. The second goal also came from a mistake – this time Granit Xhaka, who lunged in on Son Heung-min in the penalty area.

Since his Premier League debut in August 2016, no player has conceded more penalties in the league than Xhaka’s tally of five. The Swiss international also managed a whopping seven fouls on the day, which is unfathomable. Arsenal will need to show drastic improvements in this department soon, or else they risk being forced out of the top four due to their leaky defence.

Elsewhere, the composure on the ball is an area for improvement. After Aubameyang had drawn them level, the win was there for the taking if they wished to go and do so. And although Emery’s men huffed and puffed, they were unable to steal it. Why? Well, simply put, it was far too frantic. The intentions were positive, but if the team had taken more time on the ball to spot the gaps and the runs, there would have been far greater opportunities to breach the Spurs defence.

This highlights the importance of Ceballos even further, as his composure on the ball allowed him to constantly play menacing passes that created problems.

The Gunners will next travel to face Watford on Sunday 15th September, after the international break. They will then commence their Europa League campaign with an away trip to German side Eintracht Frankfurt the following Thursday. Emery’s men will be buoyant after their comeback against Spurs, and will be hoping this can spur them on as they attempt to claim a spot in the top four, as well as making a push for the Europa Leage crown.