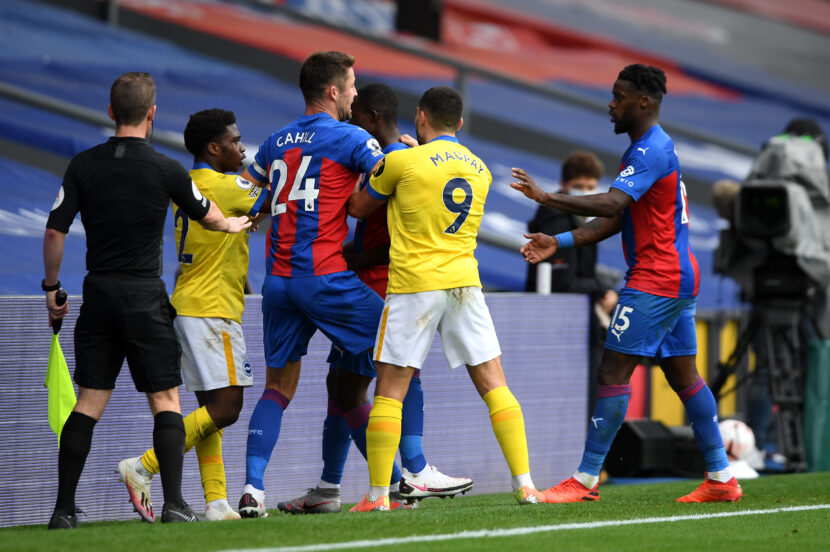 Both sets of fans will be hoping the heat of the rivalry is not lost in their absence when Crystal Palace face Brighton for match week 25’s penultimate fixture.

It is undoubtedly the biggest match of the season for these respective clubs. There’s no denying it. Supporters live for these moments, for these 90 minutes filled with hatred and hope; it’s almost unhealthy. But we wouldn’t change a thing… would we?

This fixture was the last one before fans were evicted from stadiums across the country last March. Since then, as has been said on a dizzying number of occasions: football has not been the same.

The history of the rivalry – note, not a derby – is vast, confusing and very, very heated. Roy Hodgson has said, however, “Everyone at the club is very much aware of that” when quizzed on the importance of this match. It will also be interesting to how the players perform with no verbal degradation from opposition fans; will this ‘soften’ the players, or allow them to play?

Nonetheless, with Fulham’s recent upturn in form, both teams must improve to keep themselves clear of the relegation zone. Particularly Brighton who are a mere four points afloat.

The frustrating aspect, from a Brighton perspective, is that they play like a top-10 side but their results are relegation worthy. Spectacularly, their last three home wins have come in 2019, 2020 and 2021. Yet their expected points this season (a points tally calculated based on the performance of their expected goals for, and against, in each individual match, as opposed to the actual result) would have them in fifth place according to James Tippett’s xGPhilosophy.

The most unlikely of rivalries has created many a spectacle in the past, peaking at the Championship play-off semi-finals in 2012/13, at least for Palace. The Eagles will have to make do without that day’s unanimous man of the match.

Wilfried Zaha’s continued forced omission, courtesy of a hamstring injury, has robbed this week’s visitors of a great deal of flare, speed and attacking threat. And a lot of points. Their record in his absence is rather worrying – losing 18 of their last 20 without him – and Brighton will hope to home in on this fact to improve their more disturbing home record.

In saying that, Graham Potter’s side are finally starting to produce results according to their work. They are undefeated in six games, since a 0-1 loss to Manchester City, which has included stirring, and consecutive, 1-0 wins against Tottenham and Liverpool, respectively.

One, currently, unheralded member of their squad may be newly appointed first-choice keeper, Robert Sánchez. With him in goal, Brighton have lost just three games from 13 – an unbelievable statistic considering their 17th placed position. His ability to command his defence attracted Potter and forced longstanding number-one keeper Mat Ryan out of the club. Hist post-shot expected goals minus goals allowed per 90 (basically the expected number of goals the keeper is expected to have conceded, minus actual goals conceded; thus, how efficient the keeper is) is the highest in the league (as per fbref.com) – this is good, really good. It is also something that Brighton hope will hold true against an inefficient and impotent Palace.

Roy Hodgson is still looking for his best striker partnership without Zaha. Different combinations of Christian Benteke, Jordan Ayew, Michy Batshuayi, and January acquisition Jean-Philippe Mateta, have been trialed to no avail. Last March it was the former pair that combined for the winning goal that sent the away end into hysterics. Since then it has been a largely negative trajectory for the club.

Rivalries are matches where heroes are made, and names are etched into folklore. Will Sánchez validate his manager’s bold move to overhaul him into the goalkeeping mantle; will Benteke remind the Palace hierarchy of his talents and his worthiness of a new contract?

With almost nothing left to play for each of the clubs this season, this match represents all that is left. A win and it is bragging rights until next time, which will feel like a long time in this current COVID-stricken world. A loss… you try not to think about it, because you can’t.

Tariq Lamptey was confirmed as an absentee for this match. While fellow defender Adam Webster will have a fitness test prior to the game.

Both Danny Welbeck and Alireza Jahanbakhsh should both make the squad after training well over the previous week.

Solly March’s season currently hangs in the balance, with a knee injury threatening to derail his campaign.

Zaha’s omission is the most obvious and bemoaning. Hodgson confirmed a miraculous return to the fore was not on the cards for his talisman.

James McCarthy resumed training at some point during the last week and could potentially return to the matchday squad. This news comes along with a couple of other players picking up knocks, but Hodgson would not reveal the exact personnel.

The home side have never won on a Monday night, but their recent form is far superior to their opponents who have quite simply looked below Premier League standard with Zaha. It would be dangerous for Hodgson to experiment with the line-up and formation in such a momentous game, but that sort of decision could change the tide.