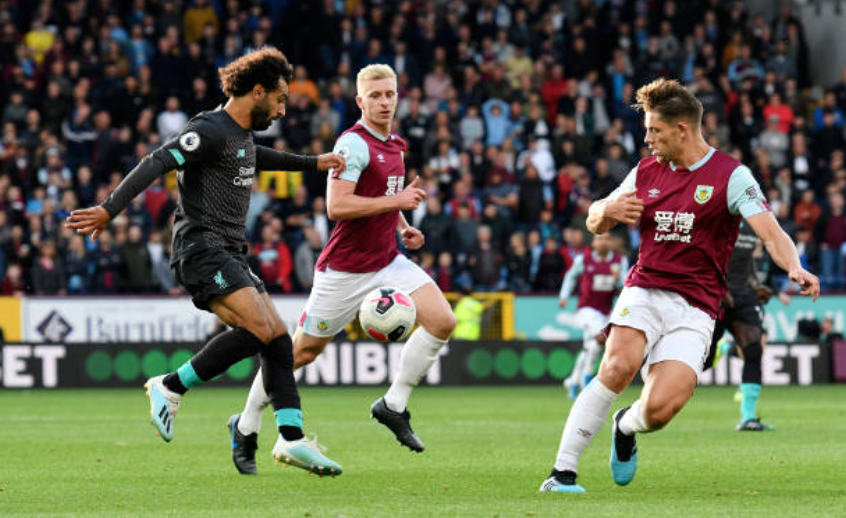 Liverpool made it four wins from four after their visit to Turf Moor at the weekend, a start they mirrored in their previous campaign.

Burnley, who’ve looked impressive this season, started brightly with an early Chris Wood effort. However, he eventually came undone after an unfortunate deflection which opened the scoring. After the reds broke the deadlock, the game went pretty much how’d you expect, with Mo Salah causing problems throughout. However, it was just not the Egyptian’s day as he squandered chances throughout and rattled the post before the opening goal.

He did however play an integral part in the build up to the game’s opener. Tracking back, he won possession to start the side’s counter-attack. The goal itself can only be described as a slice of luck after a Trent Alexander-Arnold cross deflected off Chris Wood into the far corner of Nick Pope’s goal.

I do however question the decision made by the striker to turn his back on the cross – a poor decision from the Kiwi. Not long after, the usually reliable Ben Mee gave away possession with a sloppy pass, which led to Sadio Mane extending the lead.

Liverpool’s front three caused havoc throughout the game and continued to pester in the second half. James Tarkowski was unlucky not to pull a goal back from a Burnley free-kick, though in truth the European Champions never looked like throwing this game away.

Robert Firmino added a third with an exquisite finish into the bottom left corner, leaving the Liverpool faithful with much to sing about on their journey home.

‘Best team in the world’

Since Jurgen Klopp’s arrival at Anfield, he’s turned Liverpool into one of the world’s elite once again. Champions League runners up and now European Champions, no one can doubt the quality of his team.

A side very unfortunate not to win their first Premier League title last season, they’ve started this campaign in a perfect fashion. After a very quiet transfer window, it seems Klopp feels no more additions were needed to improve his side.

It begs the question though, is this Liverpool side the best in the world? Last season saw the return of English dominance in world football and I believe there are very few who could challenge Liverpool for this hypothetical title.

However, it’s their Premier League rivals, who stake the biggest claim. Manchester City won all three domestic trophies last season and may well have added the Champions League to their list, if not for a shock loss to Tottenham Hotspur.

When comparing both team’s first XI, I become hesitant to answer the question. However, it’s Man City’s squad which ends the argument. City’s depth is incomparable, something emphasised when Jose Mourinho jokingly suggested their second team could win the league.

In the end, football is a matter of opinion and I ask, who do you think is the best in the world?

Throughout Sean Dyche’s reign, Burnley have always set themselves out in a structured and organised manner, with the teams centre-backs playing a pivotal role. Mee and Tarkowski are the current defensive partnership at Turf Moor, two players who rarely put a foot wrong.

Burnley are not known for their attacking threat and they rely on this organisation, especially at the back, to compete. The visit of Liverpool would always prove testing for the Burnley back line, who were unfortunate to go behind after a fluke deflection.

But what was to follow was very much uncharacteristic of Burnley and the side’s captain. Mee, so often reliable, gave away possession too cheaply which led to a second Liverpool goal, effectively putting the game to bed.

It’s mistakes like these which can cost Burnley points throughout the season, though I believe it to be a minor blip in the Englishman’s season.

Best front three in the league?

Liverpool have been a joy to watch in recent seasons, none more so than the side’s front three. In the opening four games Salah, Firmino and Mane have scored seven goals between them. But the question looms, is this the best forward trio in the league?

The Premier League at present has been blessed with attacking talent and an argument could be made for many teams’ front line. However there is only one in my mind which can be considered, and that’s Manchester City.

Raheem Sterling, Sergio Aguero and Bernardo Silva, a formidable force in the league last season, have scored 12 goals between them thus far. A difficult choice in many ways, there’s little to choose between the two teams.

Last season Liverpool’s trio scored 54 goals, nine more than City’s front three. However, with City more inclined to rotate these players, the stat essentially discredits itself. Where I believe we see a difference is in the teams themselves.

Liverpool are more reliant on their own front three. You could rotate the entire midfield, but one change in attack and you notice the difference. Man City on the other hand look less dangerous when key midfielders like Kevin De Bruyne are missing.

To answer my own question, I have to side with Liverpool, but who do you think boasts the best trio?

Tough start for the Clarets

After brushing Southampton aside on the opening weekend of the season, Burnley have since travelled to the Emirates, Molineux and hosted Liverpool. Arguably the toughest start of any team this season, but Sean Dyche can walk away happy with the club’s overall form.

Four points from four games has left them 12th in the table, only one point behind top four contenders, Tottenham, Chelsea and Manchester United. I’ve been very impressed with Burnley so far and they look more like the side who finished 7th in the league two seasons ago.

After the international break, the Clarets face three sides tipped for relegation, three games which could impact the club’s season. If they can mirror their current performances, I wouldn’t be surprised if they won all three games.

Last season Firmino scored ten fewer goals than both Mane and Salah and some may argue he is the weak link of the trio. I however believe him to be the player which makes the team tick. An unconventional striker who is happy to do the hard work and help transition his side’s possession into attack, creating chances for his fellow frontmen.

Firmino is the perfect fit for the way in which Klopp wants to play, taking the false nine role in his 4-3-3 formation. However, the manager may look to adapt the formation slightly, based on the form of another. Firmino has been relatively unchallenged in his role in recent seasons, though when called upon, Divock Origi has been making a statement to take his place.

The Belgian striker offers the side a different outlet, a player looking to score rather than create. There’s no reason to suggest Origi will replace Firmino anytime soon, but the Brazilian will need to be on top form this season to ensure this doesn’t happen. This competition for places is the reason why I envisage a big season ahead for the Brazilian international.

After the international break, Burnley travel to Brighton with Liverpool hosting Steve Bruce’s Newcastle. Can Liverpool make it five wins from five?