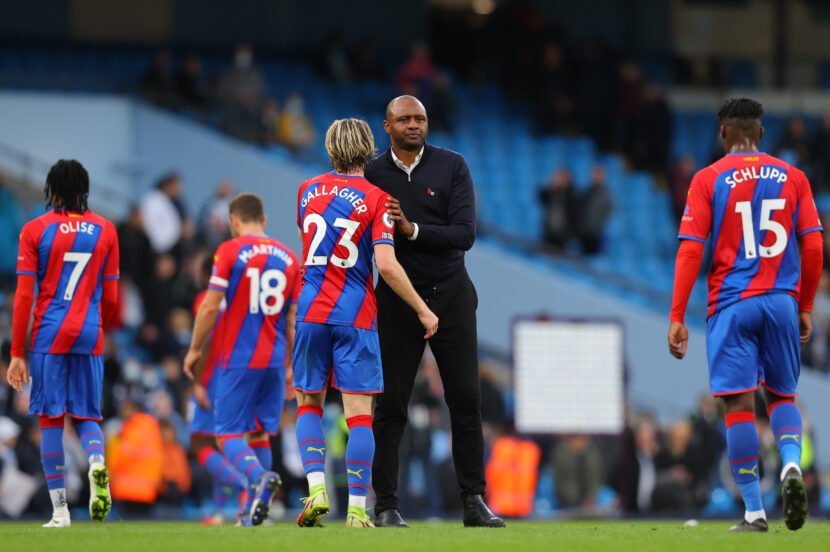 A fortnight off can halt momentum or be the foundation for an upturn in form; can Burnley kickstart their season against the unbeaten-in-six Crystal Palace?

Burnley have won the last three matches between these two sides by an aggregate score of 5-0, including a 0-3 result last season at Selhurst Park.

With two wins and four draws in their last six fixtures, Palace have now moved to within two points of sixth. Patrick Vieira has transformed their playing style and is evidently becoming the most important signing of the Eagles’ season despite the blistering start of many of the club’s new players. Vieira should be credited with the ease at which the acquired players have transitioned into a new side and, also, how well the pre-existing crop have adapted to a completely different playing style.

To put things into perspective, last season Palace averaged less possession, expected goals, and less pressures and touches in the attacking third, per game than this weekend’s opponents Burnley, who finished five points below them. Now in 10th, Palace are absolutely dominating Burnley in these parameters. For example, from an average possession count of 40.1% to Burnley’s 41.7%, it now stands at 51.4% to 38.7% in Palace’s favour.

Vieira has made Palace into a more progressive, possession-based side who are not afraid to press their opponents. Their structured and successful pressing – the fourth most successful pressures in the league this season – was a significant reason for the opening goal, and subsequent 0-2 win against Manchester City now three weeks ago. Often it is one of the wingers, or one of the midfield pair of James McArthur and Conor Gallagher who initiate the press when the opposition pass the ball to a wide player – a full-back or a deeper-lying wide midfielder. The response to the triggering press is immediate and is a significant reason to their pressing success.

Against Burnley they may not record their highest number of pressures, but most likely their highest possession count. Burnley, as they always do, will happily defend for 90 minutes in their renowned 4-4-2. They will invite Palace on to them who, at times this season, have not seemed all too comfortable in breaking down teams in a low block. The return of Eberechi Eze – albeit from the bench most likely – and the continued increasing influence of Michael Olise should help eliminate this problem.

Burnley, however predictable they will be defensively, now pose a different threat in attack. Maxwell Cornet, formerly a winger, has been paired up front with Chris Wood in favour of Ashley Barnes and Mattej Vydra. His pace and movement differs to that of the other Burnley forwards and his three goals have certainly been welcomed in a season where his team have scored just eight otherwise. His ability to find space behind the defence is something Palace will have to watch out for with neither Marc Guéhi nor Joachim Andersen being the quickest, and this much West Ham United exploited in their result earlier this season.

A typical Burnley draw last week against league-leaders Chelsea followed an impressive 3-1 win against Brentford the week earlier – including two goals from the aforementioned Cornet. These points represent half of their season total, and head coach Sean Dyche will be hoping they have not lost momentum from their late equaliser at Chelsea in the week preceding the international break.

Ashley Barnes seems to have picked up a knock over the international break, whilst the club will be without Dale Stephens yet again.

Chris Wood and Maxwell Cornet have returned unscathed and have been cleared to play this weekend.

The hosts could well start the same 11 that earned a draw at Stamford Bridge two weeks ago.

This week should mark the much awaited first-team return of Eberechi Eze. The club has taken a calculated approach in a recovery that has exceeded all expectations with this return occurring more than a month ahead of schedule. Eze completed 90 minutes in the under-23s as well as during an in-house friendly during the international break.

The other significant news is that James McArthur has succumbed to a hamstring injury over the international break while at home with Palace. Vieira has multiple replacements available to him – Will Hughes has yet to debut and Jeffrey Schlupp has impressed each time he has been offered an opportunity from the bench. Whilst Eze also provides a completely different type of player, but he may cause imbalance in the defensive phase.

Positively, Nathan Ferguson has returned to first-team training. The club is likely to take an incredibly patient approach to his return as he has not featured for the first-team since his arrival in January 2020.

Palace have performed admirably in the face of the toughest fixture of any side in the league this season. They are comfortable on the ball, learning to break down teams and all three of the predicted starting forwards have at least three goals, with Olise and now Eze to support from the bench.

Burnley have proven resilient in recent weeks and played positively against Brentford before a typical display against Brentford. They will have to try and catch Palace on the counter, hoping they can find gaps in their defensive line whilst the hosts frustrate the Eagles defensively.