Those of us who play chess know that the centre of the board is the most pivotal point of the board.

The player who is able to secure control of that area generally goes on to win the game, for he not only becomes the aggressor, in terms of attacking the opponent’s king, but he is also able to mount a comfortable defence, for his opponent’s attack must go through the centre, which is already being patrolled by the player’s pieces.

Analogously, football is no different. Central midfield is the most important area of the pitch, for that’s where a large chunk of the attacks come from, as well the entirety of the support for attacks down the flank.

Getting full control of the centre of the board in chess allows a player to push forward with the attack at will, and the majority of the opponent’s moves are spent counteracting this attack. Likewise, to get the centre control back from you, your opponent has to align his pieces in an unerring manner, which would, most of the time, involve some sacrifices, plus of course, a great deal of moves wasted in trying to get back into formation.

Unsurprisingly, getting control of midfield in football means that your attackers can push forward freely, without any hesitation of overcommitting, and also involves the added benefit of being able to recycle the attacks continuously, for when the ball is cleared, as it must to avoid further threat under press, it falls straight back to the central midfielders.

At Anfield, where Manchester City’s record is appalling, to say the least (2 wins in 45 years, none in the previous 15), Liverpool started off as favourites. Despite the departure of Coutinho, they had enough firepower to put this City side under serious threat. The injury to Virgil Van Dijk meant they had some defensive issues of their own, but their set up and the work ethic put by them on the night meant those frailties weren’t exposed as regularly as they otherwise might have been.

Jurgen Klopp’s footballing philosophy is extremely basic, but also very efficient. Klopp’s players are trained to outlast those of any other team over the course of the 90 minutes, such is the physicality and the stamina they have developed. Now, Guardiola’s men aren’t behind in that respect at all, but on the day, they were made to look extremely fatigued and rather careless as Liverpool’s attackers ran circles around them with their high pressing for much of the game.

It is very interesting to note the central midfield players for either side this game – David Silva was left out for City, perhaps owing to the fact that Guardiola preferred a more dual natured Gundogan, who could contribute both defensively as well as in the build-up. For Liverpool though, with Henderson out injured, they lined up with Oxlade Chamberlain and Georginio Wijnaldum either side of Emre Can. Both players used to be wide players, who have been converted into central midfielders by Klopp. It was owing to their presence that Liverpool’s midfield should have been defensively vulnerable, but, alas, it was the latter. When ‘Pool seized control of the game for the opening 20 minutes, they built up a tempo that no one had been able to against this City side, with Napoli away being the only exception. 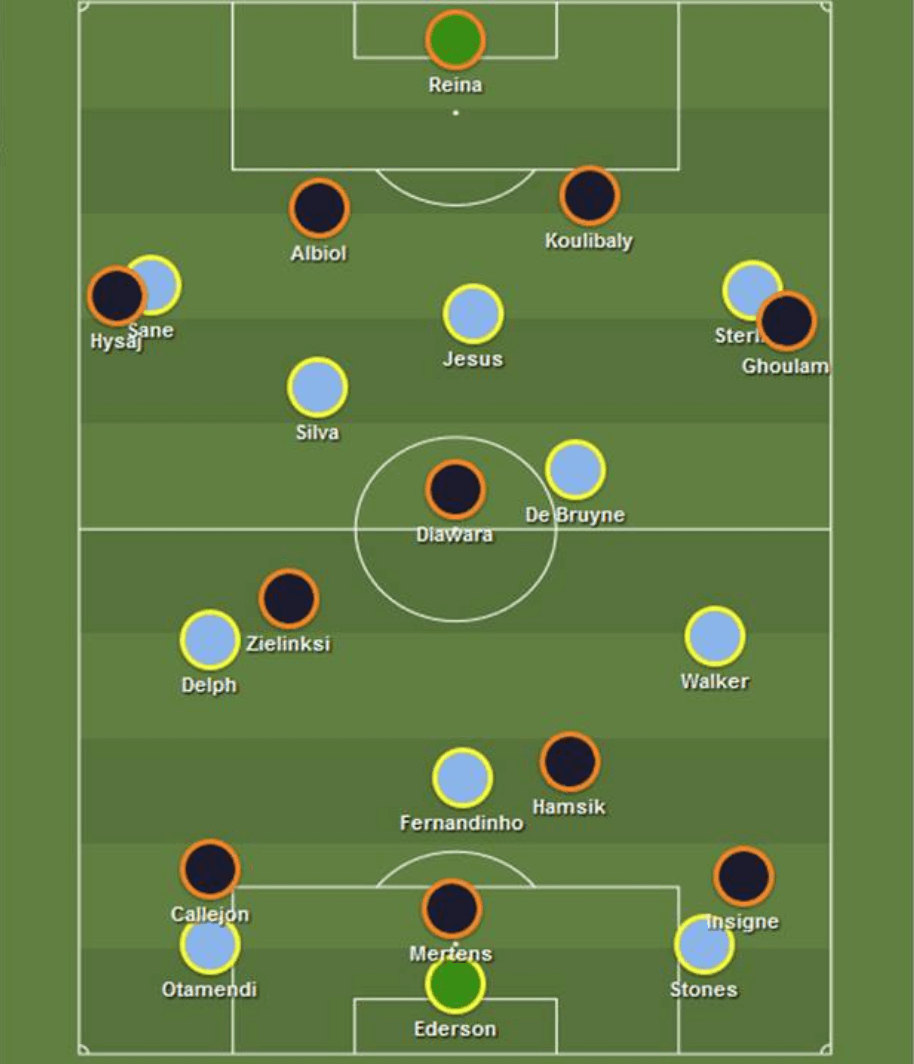 In general, one often sees the full backs support the wingers from wide positions, with the one CM supplementing the attack, one sitting in front of the back line, protecting them, and the one on the opposite side in a moderately advanced position, ready to latch on to a loose ball or defend the counter from a loose pass. In Liverpool’s set up, it was different. The full backs stayed withdrawn to maintain a straight back 4 across the entirety of the first 45, with the wing support actually coming from Chamberlain and Wijlandum, with Can staying near the half line, shadow covering Aguero and taking up the space that De Bruyne would have occupied at the change of play.

City’s midfielders were drawn deeper into their own half, for Liverpool’s front 3’s pressing was second to none. The fact that only 3 pressed whilst others held their positions meant City’s creators had to drop further into their own half to get on the ball, which meant they had to beat one extra line of Liverpool defenders. This was the point where Napoli went wrong. Using Ederson as a pivot for the build-up, City were able to create a 4v4 on the press, with 2 out balls always on towards the full backs, which effectively took another central midfielder out of the equation.

Liverpool did not repeat the same mistake. Their strength on the change of play caused City problems throughout the first half, causing them to turn excessively to long diagonals from the full backs and centre backs towards the wingers, trying to get the latter 1v1 against their men. The tactic paid off, when Leroy Sane controlled wonderfully from a remarkable Kyle Walker diagonal, and sold Gomez and then Karius at his near post to finish an excellent goal. The teams went into the break with scores level. 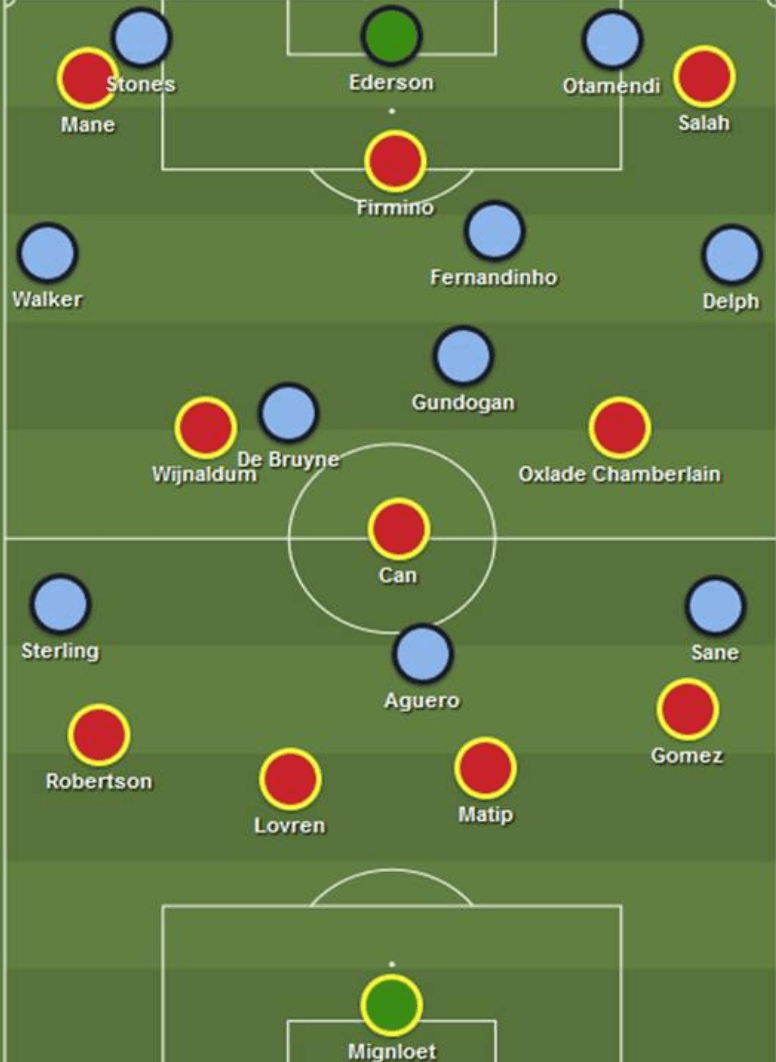 City then looked to control the centre of the park in the second half, dictating play, keeping possession for long spells, as they usually do. To this, Liverpool again deployed their full backs to form a flat back four, and the central midfielders crowded out the centre of the park. One outball was allowed, and that was the 1v1 on either flank. Sane looked dangerous against Gomez, but Sane too, needed help from Gundogan and Danilo, but Liverpool once more crowded out the space, fielding an extra man to defend the tight spots.

Sergio Aguero was isolated, and wasn’t allowed to get the ball behind the midfield. He had to drop deep to pick the ball up, which left a lack of options in behind. It was here that City’s defenders had to conjure up something out of their hats to break this stubborn Liverpool midfield line down, and in the process they erred. A little too often. A very torrid 10 minutes followed, as Liverpool scored thrice, from direct City mistakes, namely, trying to be a little too precise in playing the ball out. However, it was quite good to see Guradiola appreciate his players’ effort in trying to unlock the defence. He knew his men were aware of what needed to be done, but were unable to carry it out perfectly, which he appreciated.

The next twist in the tale came with the departure of Emre Can from the role of the midfield pivot, a few minutes after Bernardo Silva came on for Sterling. As I have maintained, Emre Can is the most important piece of this Liverpool puzzle, and once he was taken off, the order and the organisation went for a toss.

Bernardo kept cutting inwards, with Robertson unsure of whether to go with him or not, and James Milner not up to speed on what exactly his positional rigidity was. Liverpool took their foot completely off the gas, inviting more Man City pressure. Bernardo repeatedly got onto the ball, and suddenly, Aguero, Bernardo and Gundogan were afforded the chance to really link up.

They were able to play directly in front of the back four, and through the side of the full backs, who were forced to compress and defend their 18 yard box. The result? two quick goals, which had Liverpool holding on for dear life towards the end. City then won a set piece which had the entire capacity of Anfield sweating. When Aguero went to ground, and the ball hit the side netting, it was the inevitable end to an unbeaten run that every single member of the City staff and the players had insisted would someday be halted.

However, that being said, a Manchester City side that had looked down and out, forced into errors and outplayed for near 75 minutes of the game needed only 10 minutes and an errant substitution to turn the game on its head. That, in itself, speaks volumes about how well this City side has been lined with the will to go till the final whistle, and to create even when the chips are down. That’s what champions are made of.