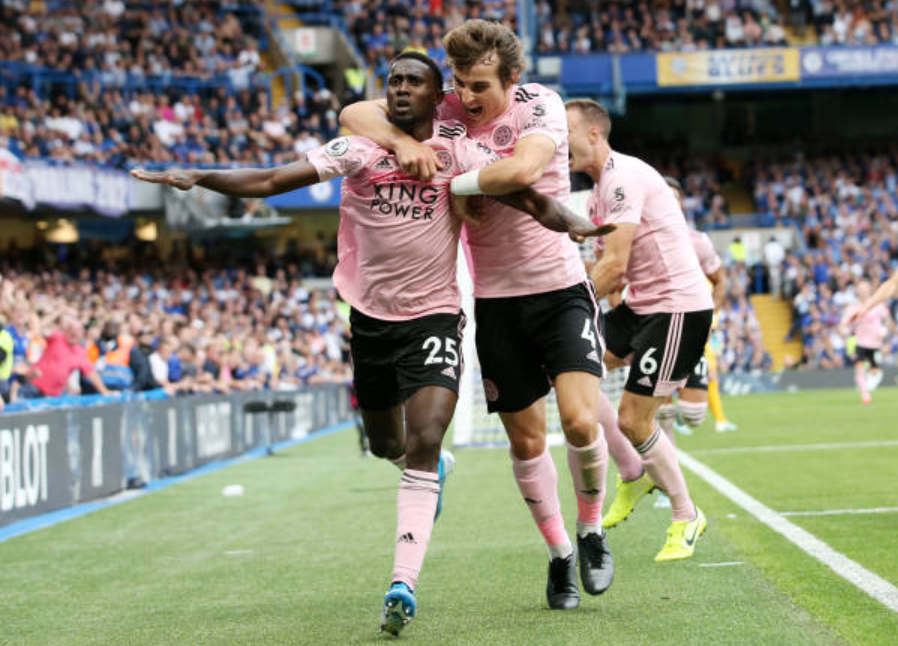 Frank Lampard’s first home game as Chelsea manager ended with a scintillating draw against Leicester City, in a game that epitomised the saying “a game of two halves”.

Chelsea began the game flying, full of energy and optimism, and by the second minute, they had already created two chances that the Foxes were fortunate not to concede. The pressure continued, and Blues fans did not have to wait long for the inevitable breakthrough. Mason Mount forced a silly error from Wilfrid Ndidi, winning the ball on the edge of the opposition box before providing a cool finish to score his first Premier League goal and put Chelsea 1-0 up.

Chelsea’s pressure did not relent, with more fast attacking play and smart turnovers, while more errors from Leicester meant they were lucky to reach the twenty-minute mark with only one goal conceded. N’golo Kanté had a fine chance to double Chelsea’s lead, only for former-Premier League winning teammate Christian Fuchs to poke it wide with a desperate last-ditch tackle.

But as the first half progressed into its last third the game slowed and Leicester began to hold onto the ball with some slick possession play. They created little with it, but having possession meant the energetic Chelsea side did not, and both sides went into the break knowing work was certainly to be done.

Rodger’s side emerged from the break with renewed energy and a burning desire to make something of their dire performance. After a small Chelsea spell, they piled on the pressure with quick passes and fast attacks built through midfielders James Maddison and Youri Tielemans. It was Wilfrid Ndidi, however, who provided for the Foxes – powering home a bullet header from a Maddison corner and claiming his redemption.

From here it was one-way traffic and the Foxes came at the Chelsea goal again and again with their energy and creative passing easily cutting through their opponents. But for all their chances no goal came. A hectic final five minutes of end to end football provided a fitting finale to the match, and although Leicester were the side to dominate last, both Lampard and Rodgers will have been ruing their missed chances when the whistle was blown for full time.

Promising signs for both sides

Both Chelsea and Leicester will come away from the game knowing the whole three points were up for grabs. It is fair to say that the top 6 is the goal for both of these teams and these missed points may prove to be sorely missed when the end of the season rolls around. The two halves of this game showed both sides of two growing teams utilising young players, one good and one bad, and it has certainly proved a very good test for both managers who will now want to push on from here.

While Frank Lampard may be ruing the chances his team missed, the circumstances of the situation will certainly not be lost on him. The Chelsea boss named almost exactly the same side as the one that started the grueling 120-minute European super cup on Wednesday, with the only change being Mateo Kovacic for Mason Mount (who played 45 minutes himself). The effects of this game were seen on the pitch by Chelsea’s tired second-half showing, and fans can be assured that the downfalls of the performance will have been mainly caused by European final fatigue.

Youngsters shine in the Capital

James Maddison won plaudits after the match for his performance – and rightly so. Alongside providing the corner delivery for Wilfrid Ndidi’s leveler, he was responsible for many of his teams’ chances with smart through balls or blinding dribbles through the Chelsea defense. His shooting did leave much to be desired though and he missed Leicester’s biggest chance of the game, for which he received a twitter jab from Jeremy Clarkson (Maddison was on target with his reply, however).

Similarly, Mason Mount impressed on his Chelsea home debut, capping it with a goal. Lampard’s faith in Mount has paid off rather quickly after a hot-and-cold performance against Manchester United last weekend. He joins the ranks of young, promising English players that are vying to get into Gareth Southgate’s England squad prior to the European championships later this year.

Has the slab-shaped hole already been filled?

Leicester fans are certainly not missing Harry Maguire since his big money move to Manchester United. His spot has been very aptly filled by Turkish centre-back Çağlar Söyüncü who, after a great performance last week against Wolves, impressed again against Chelsea. Seeing off Giroud, Pulisic, Pedro and about every other Chelsea player who crossed his path, Söyüncü has impressed with his strength, pace, and calmness on the ball. It seems the slab-shaped hole may have already been filled.

Brendan Rodgers and Leicester City head to Sheffield next weekend to take on Chris Wilder’s Blades side, while Frank Lampard’s Chelsea play Norwich at Carrow Road.