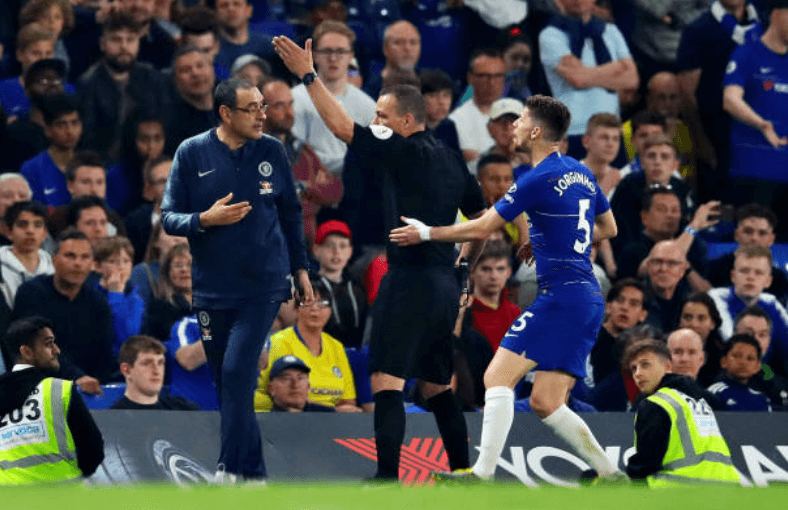 Chelsea’s Champions League qualification hopes were dealt a huge blow as Burnley held them to a 2-2 draw at Stamford Bridge on Monday night.

Sean Dyche’s men took the lead after just eight minutes through Jeff Hendrick’s stunning volley from outside the penalty area which stunned Chelsea into a response. The Blues then hit back with goals from N’Golo Kante and Gonzalo Higuain in a ruthless three-minute spell – both goals had a sense of pure quality as Eden Hazard chopped and turned to provide Kante with a free shot at goal whilst Higuain’s shot from an angle was far too powerful and flew past the onlooking Tom Heaton.

Burnley were not done there though and Ashley Barnes got the Clarets back on level terms midway through the first half, and they held on to claim an impressive away point, despite being up against it for the majority of the second half.

Missed opportunity for Chelsea and Sarri

A win would have taken Maurizio Sarri’s side up to third and given them a three-point lead over Arsenal in 5th. However, their hopes of achieving a top-four finish are now in doubt, and they have a tough trip to Old Trafford still to come.

They enjoyed lots of possession but struggled to break down a resolute Burnley defence who maintained their shape throughout the match. A third goal would have changed everything, but the Blues were unable to provide enough quality in the final third.

The reaction of their players and coaches at full-time shows how much this result could affect their position in the league table come to the end of the season.

40 points usually guarantees safety in the Premier League and Sean Dyche’s men have now reached this total with three games still to go.

This is a huge achievement considering they picked up just 12 points from their opening 19 matches of the season. Their turnaround in recent months has been impressive, having now picked up points against Manchester United, Tottenham and Chelsea in 2019.

They now sit nine points above the bottom three and, with a superior goal difference to Cardiff, they are almost mathematically safe.

A hectic first half

It is rare to see four goals in the first 24 minutes of a top-flight match, but that is exactly what happened at Stamford Bridge.

The Clarets have been lethal from set pieces all season, having scored the second most goals from dead-ball scenarios in the Premier League this season. This trend continued as Hendrick scored following a corner and Barnes then fired home after a clever free-kick routine.

Meanwhile, Chelsea produced two moments of quality inside the penalty area. The first was a clinical finish from Kante after some good work on the left wing, and the second was an unstoppable strike from Higuain from a tight angle. These goals made for great viewing for the neutrals.

Tensions run high at the Bridge

The reaction of both benches at full-time captured just what this game meant to both sides. With the point, Burnley have now technically reached safety, as the Bluebirds will unlikely win all their remaining games whilst also cancelling out their dreaded goal difference.

Sean Dyche clearly knew the point now makes them a Premier League team next season and instantly went to his fans who he credited as being ‘excellent all season’ in his post-match press conference. As for Sarri, he was not on the pitch come the final whistle and could not shake hands with the Burnley manager.

He was sent to the stands by referee Kevin Friend after his reactions to a late scuffle between both sets of players. Zola, who took over media duties after the 90 minutes, simply stated his manager was going to tell his players to get on with it and finish the game yet this was not how Friend saw it and he sent Sarri to the stands, much to his disgust.

A scuffle also kicked-off between Chelsea defender, Antonio Rudiger, and a member of the Burnley backroom staff which did not look pretty as Rudiger was clearly frustrated with the performance of his side.

The game was shadowed by an injury to Chelsea youngster, Callum Hudson-Odoi, as he limped off with a suspected ruptured Achilles injury. The injury could see the youngster on the sidelines for some time and he confirmed on Twitter after the 90 minutes that he would be missing the rest of the season.

The stats don’t look good for the youngster though with most ruptured Achillies injuries taking 8-9 months to return from. The injury is a huge disappointment as the 18-year-old had only just broken into the Chelsea starting XI yet he will now turn his focus to rehabilitation and returning for next season.