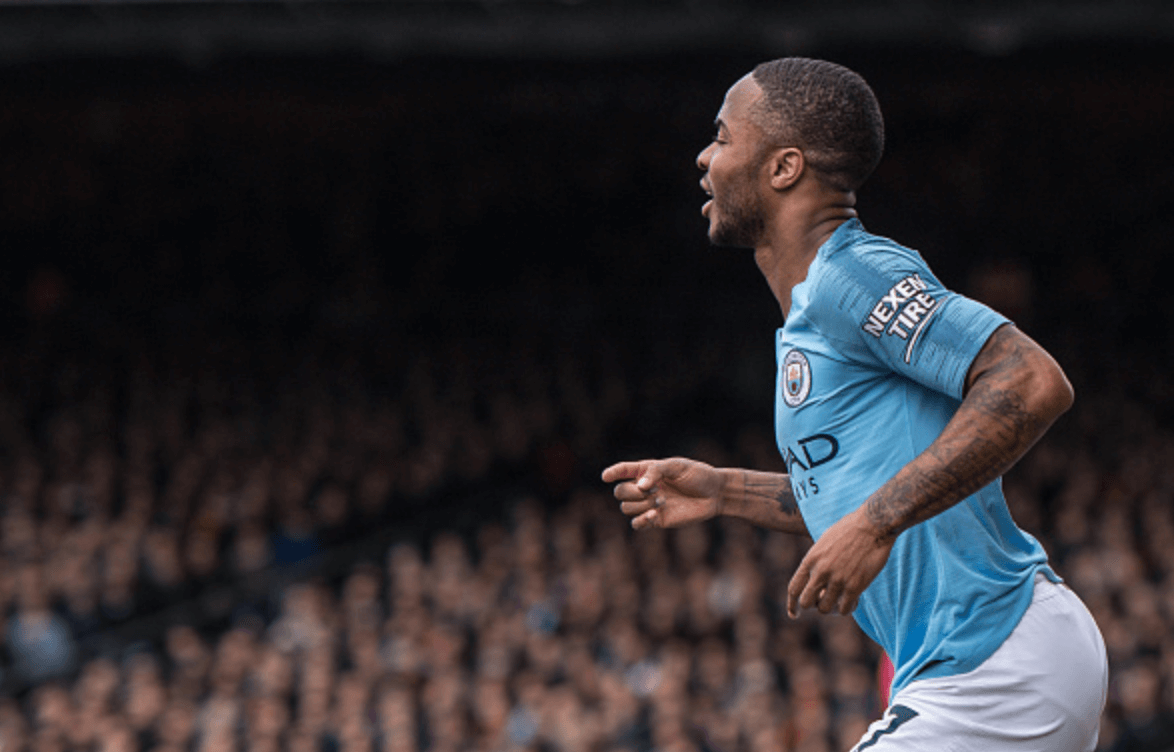 In form Sterling missed a glorious early chance but made amends with two goals either side of half time as City outclassed their hosts for the majority of the game.

Luka Milivojevic smashed home a free-kick with minutes remaining to give Palace hope of gaining an unlikely point, but substitute Gabriel Jesus made sure of the points in injury time.

The victory keeps City in touch with Liverpool, who beat Chelsea later on Sunday. whilst Crystal Palace remain 11 points clear of Cardiff in 18th.

The Eagles made two changes from last weekend’s victory at Newcastle, bringing in Scott Dann for the injured James Tomkins and Christian Benteke for Chelsea loanee Michy Batshuayi.

City made four changes from the midweek defeat to Spurs as they look to freshen their side up ahead of the return trip to North London.

Benjamin Mendy came in for his first league start since November in place of Fabian Delph, while Vincent Kompany returned at centre back in place of Nicolas Otamendi.

Fernandinho was deemed not fit to play and was replaced by Kevin De Bruyne, while Leroy Sane deputised for the out of form Riyad Mahrez.

Sterling proves worth once again

In many ways, today’s game epitomised Sterling’s improvement under Pep Guardiola, with the Spaniard inheriting a winger with pace to burn but sparingly little final product.

Just before he got on the scoresheet, he missed a far easier chance to break the deadlock. Such is his resilience and belief in his ability that where he once would have crumbled, he battled on and scored a superb opener minutes later.

His second was a far more straight-forward finish, but encompasses how Sterling has now added variety to the goals he is scoring. Despite all the expensive assets in City’s squad, Sterling is surely one of the first names on the teamsheet on current form.

With a huge Champions League quarter final second leg against Spurs on Wednesday night, Pep Guardiola resisted the urge to rest several of his biggest stars for the trip to Palace.

Riyad Mahrez, Fabian Delph, Fernandinho and Nicolas Otamendi were the only players to lose their starting spot from Tuesday’s first leg, with Fernandinho injured and the others rested or overlooked.

Bernardo Silva made his return this afternoon after a short spell out and will surely start on Wednesday, but Fernandinho and Oleksandr Zinchenko are 50-50 as they look to overcome minor setbacks.

The Citizens looked tired in their laboured FA Cup semi-final victory over Brighton last weekend and were outfought by Spurs on Tuesday, but they looked sharp and focused today as they continue a bruising run of fixtures.

City knew they could not afford to slip against Palace as they chase the Premier League title, and showed them respect by making just four changes. They face a far fresher Spurs on Wednesday, but can they overturn their one goal deficit and maintain the possibility of an unprecedented quadruple?

Palace on the beach already?

Despite causing City problems towards the end of the game, this was a largely dismal performance from Palace, following last weekend’s victory over Newcastle which boss Roy Hodgson said “probably” should be enough for them to stay up.

Hodgson is right, but if his side perform as they did in the first half for the remaining games this season they can not expect to pick up many more points.

The Eagles did improve in the second half, but with top-flight survival all but assured and little to play for, Hodgson faces a battle to motivate his players.

Following Liverpool’s 2-0 victory over Chelsea, City remain two points adrift of their rivals with a game in hand. They face a season-defining week, two games against Spurs and a trip to crosstown rivals United.

With three wins, City would be firmly in pole position to retain the Premier League title and likely into the Champions League semi-finals.

With anything else, their dream of the quadruple could evaporate before them. Though they are in control of their destiny in the Premier League at least, Liverpool face no top six sides in their remaining four fixtures.

One of City or Liverpool look set to achieve a record points total for a runner up in the Premier League era. Manchester United’s total of 89 points in 2011/12 is just four points more than Liverpool’s current total, with City two further back.

It looks as though this will go down to the wire. Let the battle continue.