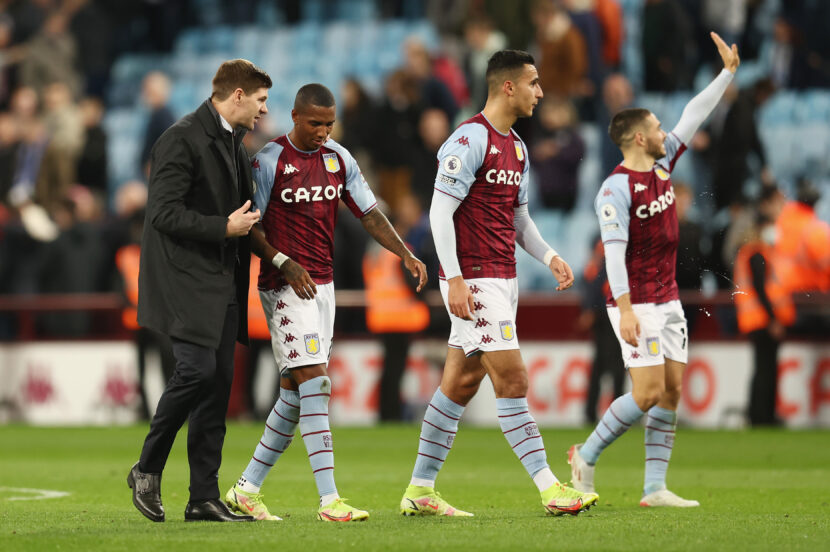 Steven Gerrard’s first game with his new club could not have gone much better. His side pressed high and well and restricted their opposition, Brighton & Hove Albion, to an expected goal against (xGA) of just 0.4, their second lowest total of the season. Offensively, and as has been the pattern with Villa all season, the front three did not click magnificently as the names would suggest they should, but there is no doubt that there is a system which they are adapting to under Gerrard.

This same system brought Rangers – Gerrard’s maiden first-team managerial post after a short stint with Liverpool’s under 18s – their first Scottish Premiership title in over a decade and the second lowest percentage of losses (13.99%) under any Rangers manager. He brings with him his own set of staff who are familiar with his 4-3-3 formation as well.

Similar only in name to Patrick Vieira’s very own 4-3-3, the two are not similar in fashion at all. Where there is a lot of width across Vieira’s front three, Gerrard’s are narrower, both in their defensive (pressing in the opposition half) and offensive phases. Gerrard’s full-backs are expected to overlap and create the width, whereas only left-back Tyrick Mitchell of the two Palace full-backs joins the attack regularly. There is much more to unpack, but it is clear these two sides, although they line-up similarly on paper, employ very different systems on the pitch.

There are many other factors to consider, and one of them is personnel. Last season both sides had rather predictable line-ups, and Palace subjectively more so than any other club. Whereas now, as show throughout the campaign thus far, neither side has a permanently settled formation.

In consecutive wins over Manchester City and Wolves, Vieira started significantly different combinations and interpretations of his front three. While Villa – largely due to a lack of identity more than anything – have not lined up with the same formation in more than two consecutive games with personnel constantly changing. This, at the very least, alludes to the sheer volume of options Gerrard will now have.

Last week it was Danny Ings who started as the centre forward, whilst Ollie Watkins played quite narrow from the left-wing. When pressing in the opposition half, Gerrard’s front three are very narrow and must work together otherwise the opposition plays past them effortlessly. This requires a centre forward who is agile, alert and quick, a role more suited to Watkins arguably and, potentially with time, Ings may be sacrificed, despite his instinctive finishing, for a renowned winger allowing Watkins to shift inside.

This is vastly different to how Palace press. They keep their shape, the 4-3-3, until the opposition play it wide and, at this point, one of the front three or the two number 8s will attack the ball out wide and initiate the press. With pressing such an integral part of the modern game, it is interesting to see how two teams can press so differently in the same formation. Against Brighton last week, Gerrard’s front three were against three centre-backs, whereas it will be just two this week in Palace’s Marc Guéhi and Joachim Andersen, who have both made equally impressive starts to life under Vieira.

It will be interesting to see how Gerrard’s narrow pressing system, which requires his two number 8s to defend wider and his full-backs to come high, respond to a faster-paced, more physically demanding and ruthless Premier League.

Especially in Crystal Palace who have proved more than comfortable on the ball this season – a far cry from yonder years – and lethal on the counterattack when required. Andersen’s long balls have been incredibly lethal so far, and you only have to look as far back as last week where his ball over-the-top of the defence to Conor Gallagher created the Eagles’ second goal. If Andersen can find an opportunity to bypass Villa’s full-backs when they come and press inside, and pick out either of the two Palace wingers, that could be a route for them going forward.

Gerrard and Vieira have been foes for a while already but hold a great respect for one another. Both have transitioned into management and are succeeding only on their credentials at the helm of their respective clubs. The duo are students of the modern game and are now at the forefront of its development, adapting to the ever-changing landscape of football. They have created systems that will make for a spectacle come Saturday afternoon.

Vieira has confirmed that James McArthur, a stalwart in the side thus far, is the only player unavailable for the matchday squad this weekend. His absence was clearly evident against Burnley last week as the midfield struggled to organise itself. Whoever replaces him will be crucial.

This means Nathan Ferguson is fit and could potentially line-up for the first time in a Palace shirt, which will be with the under-23s if he is deemed match fit-enough.

Eberechi Eze will make a matchday squad in front of fans at Selhurst Park for the first time this weekend.

Douglas Luiz, a sorely missed part of the Villa midfield this season, could provide Gerrard with an enormous boost should he be allowed to start by the medical team. He has missed Villa’s last three matches with a hamstring injury with Gerrard admitting he is pushing for a start.

Morgan Samson is participating in more training sessions but still needs to develop his fitness. While Bertrand Traoré is still a few weeks away from returning to training.

Trézéguet, who had a breakout season last season before knee ligament damage curtailed his progress, should be in line to play another fixture for the Villa under-23s next week.

Palace are eight games unbeaten and have conceded the second-lowest xGA tally from open play of any side this season. While Villa registered their equal lowest expected goal tally against Brighton last week (0.6). Gerrard’s Villa are building, and arguably so is Vieira’s Palace.

If Villa can get a hold of some set pieces, they will trouble their hosts. While Palace will need to remain patient as they have and look for chinks in the still mending Villa armour. Palace’s stability should get them over the line where the two teams are equally matched in terms of personnel.