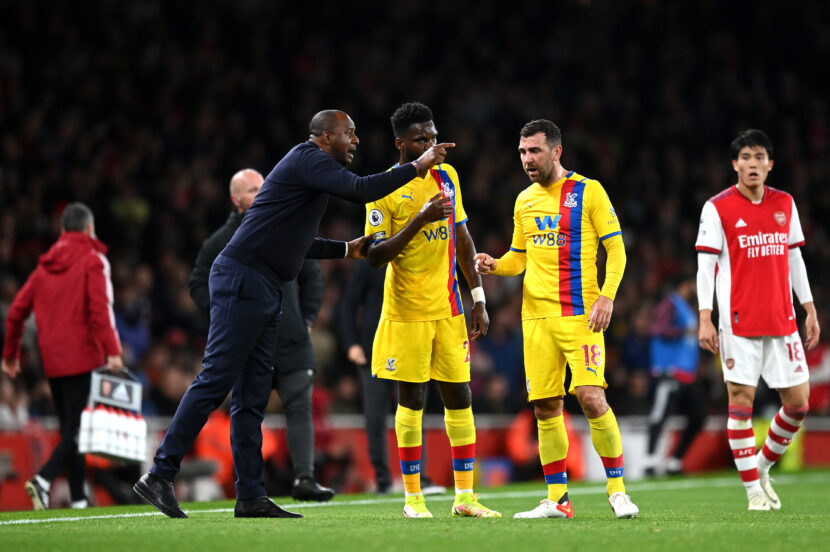 Manager-less Newcastle take the trip to South London looking to start their new era with a win against undefeated-at-home Crystal Palace.

A highly controversial Saudi-led takeover culminated in the merciful sacking of Steve Bruce, a week after he was allowed to end his managerial career on 1,000 games – possibly a move to get the new owners into the good books of the people. At the very least, it doesn’t seem to have pulled on the heart strings of those highest up in 18 of the Premier League clubs. It was Steve Parish, Crystal Palace’s chairman, who rallied the troops against Newcastle’s new regimen when Premier League executives met mid-week as revealed by The Athletic.

Patrick Vieira will hope to mount an equally effective call to arms as the hosts look to end an agonizing run of draws – including two conceded equalizers in the 95th minute against Brighton & Hove Albion and then Arsenal last Monday night.

Performance wise, it does not seem that Vieira can ask for much more from his troops; you’ll have to be hard pressed to find such a positive run of Palace performances over the last few years. Against Leicester City, you never felt that the Eagles were going to lose, and both Brighton and Arsenal had to rely on individual errors to collect their points.

Only twice have Palace lost in the Premier League this season – against the European champions and Liverpool. At the start of this matchweek, the average ladder position of their opponents, thus far, was 5.6, the highest average position by a significant margin. Vieira has his team averaging a higher percentage of possession, more shots, a superior expected goals for and against amongst several other parameters that have improved.

Familiar players have been transformed or re-found themselves and those acquired have incorporated into the group seamlessly. Out of possession it is a shop-standard 4-3-3, but it is in possession where the team has become unrecognisable.

Conor Gallagher’s movement in central midfield is key, whilst Tyrick Mitchell’s ever-growing confidence on the ball and smarts without it are quickly becoming trademarks of his game. In addition, Wilfried Zaha seems to be enjoying his football again and is allowed to come inside or loiter outside as he pleases with Odsonne Edouard’s three goals this term a great pressure-reliever.

Much noise has been about Michael Olise’s performances from the bench, and rightly so. The 19-year-old has been involved in every goal Palace have scored when he has been on the pitch since he first featured against Tottenham Hotspurs. It is important to note, though, that is undoubtedly easier to score when your side is chasing a goal or two.

Jordan Ayew registered his first return of the season when he poked the ball away from Thomas Partey into Christian Benteke’s path, who finished smartly. His workrate is unquestionable and he still holds significant value with his ability to win fouls and hold the ball up better than any of Palace’s front three. As Olise continues to build, Ayew should retain his starting berth.
Palace will not change how they play no matter the opposition, and that much has been evident in every fixture since the opening gameweek debacle against Chelsea. Confidence in their own style will be key against what could be an unpredictable Newcastle.

Graeme Jones, an experienced assistant manager who has been with the club for just over a year, will take the reigns until the man to be entrusted with the Saudi money is pinpointed.
Staff and players reported that Jones was virtually already in charge, as revealed by The Athletic, and this much has been seen in recent weeks where Jones was allowed to talk over ex-manager Bruce to players from the sidelines.

Whether Jones will opt to instil a philosophy into the team in the hopes his name is put forward for the permanent position or, instead, implore his players to ‘express themselves’ after being inhibited for so long, only remains to be seen. It will most likely be the latter and it is this philosophy that often facilitates the ‘new manager’ bounce so often seen.

Allan Saint-Maximin’s tweet midweek, thanking Steve Bruce for his tutelage, was a graceful touch from a player whom many believe has been hard done by under Bruce. So often much of the creative and offensive responsibility has been thrust on to the Frenchman that it is difficult to tell how much he can really do with a team to support him.

Callum Wilson’s pedigree is undying; a striker never loses his instincts. For Newcastle he has registered a goal and two assists in the two games he has faced Palace and will relish the opportunity to target a defence that has suffered from lapses of concentrations at high cost moments this season.

Both goals Palace conceded against Arsenal, Brighton’s last minute fortune, and all three of Liverpool’s have come from deflections, flicks and poor man-marking. Maybe this will be the crux of Newcastle’s preparation this week? Wilson and Saint-Maximin especially are difficult to track at the best of times. Currently, set-pieces seem to be Palace’s kryptonite and the Toon could do much worse than looking at increasing their set-piece count at Selhurst Park.

Once more there were no newly obtained injuries throughout the past week. Although, that’s what was thought in the lead up to the Arsenal fixture before it was revealed that Wilfried Zaha returned ill from international duty and subsequently missed the match. However, Vieira has confirmed the Ivorian will feature in the squad this weekend.

Nathan Ferguson remains the only first-team player not in training. It is perceived that this return is close as he continues his impressive recovery from a torn achilles suffered in May this year.

If Ferguson was ahead of schedule, then Eberechi Eze has made a mockery of his rehabilitation from a torn achilles in May. The 23-year-old has already returned to training with a return to play set within the next couple of weeks.

Newcastle boast a similarly empty medical room with Freddie Woodman the only first-team player unavailable through injury this weekend. His return looks to be within the next couple of weeks.

Jonjo Shelvey is the only other player absent from the matchday squad after he picked up two yellow cards as a substitute in last week’s gritty loss to Tottenham.

Palace have been resolute in defence this season and positive in attack, and the same cannot be said for Newcastle.

A new outlook and permission to express themselves may, in combination with the overall positivity within the club at the moment, could spur them to victory.