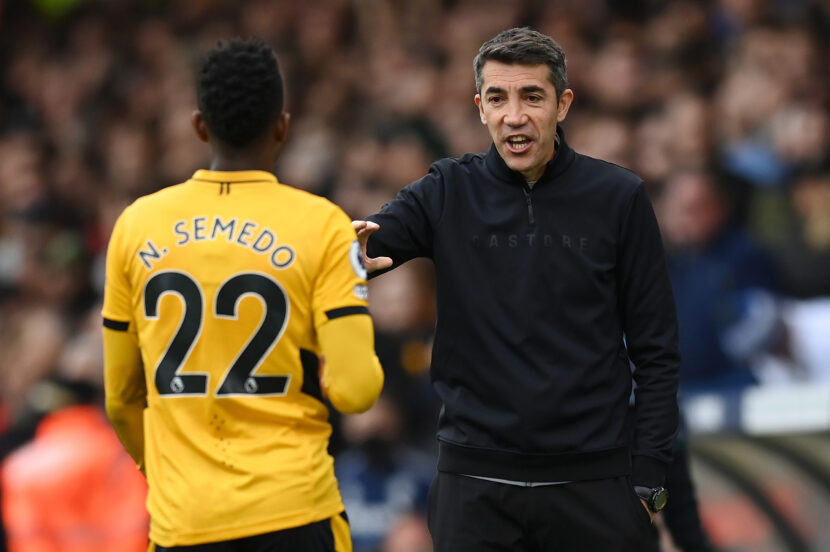 Two teams unbeaten-in-five will tough it out under new management for the first time when Wolves travel to London to play Crystal Palace.

The positivity surrounding these two clubs could not be more contrasting to the feeling last season as they both trudged to 13th and 14th, only separated by a point. They are currently separated by four, but this will not deter Palace currently on 12 points, and still in 14th, behind their seventh-placed opponents.

Patrick Vieira for Palace and Bruno Lage for Wolves were supposed to be two of the first coaches out of a job this seasno. Only 10 games in, and there is no mention of unrest or unsurety at either club. Players have bought into the respective philosophies and neither side is heavily reliant on a talisman as in seasons past; the coaches are getting the best out of their players and you only need to watch them play to see their enthusiasm with the results only positive.

So much of the personnel has changed at Palace since the end of last season after only 15 first-team players had contracts when Vieira first arrived. It was thought there was too much for the Premier League novice to decipher and the consensus was that he was not capable to usher in the new era that the club has been building towards.

Lage’s off-season was dissimilar in that not much had changed. Rui Patricio was sold and José Sá was brought in, while Hwang Hee-Chan and Francisco Trincao arrived on-loan; otherwise, he inherited a coach of ready-made Premier League players. He has remained committed to the three-at-the-back system that has brought the club so much success over the last few years – a change from a 4-2-2-2 that birthed Rubén Dias and Joao Felix – but he has made it his own.

Vieira has opted for a 4-3-3, a formation not unfamiliar to some of the veterans at Palace. Yet it is how he has them playing that is bewildering compared to their forlorn, defend, defend, and then counter style of play that was so predictable last season. Last week against Manchester City was the first time we have seen them employ this strategy since their opening matchweek initiation at Stamford Bridge. This is despite their average opponents holding a position on the table of 7.3, the hardest run in the league by some distance. Interestingly, Wolves have enjoyed the easiest run of all clubs with their opponents averaging to a position of 12.7. You can only beat who you play, though.

Vieira’s two eight’s in James McArthur and Conor Gallagher are the centre piece to a high-functioning system. The former already has the fans bellowing his name, but it’s the latter who has endeared himself to the Palace faithful this season; it is hard not to fall in love with a loan player who has netted 3 goals to go with 2 assists already.

The midfield has unlocked the forward line, so much so that Palace now boast four forwards with at least two direct goal contributions after 10 matches played. For context, they have never had more than one. Most importantly, Wilfried Zaha is playing with a consistent freedom we have rarely seen over the past four years. So often isolated with multiple men to beat, he had two of the league’s five most expensive centre-backs ever at his mercy last week playing as a lone number nine for the first time ever. Yet, you never felt that he was alone. Vieira’s man-management has been key to his success at the helm so far this season, and Zaha’s renewed flexibility – threatening from the right wing against Newcastle as well – is evidence of this.

It will be a battle for possession on the weekend as Palace’s average of 50.6% – remembering that they have never averaged the majority share of possession during this current Premier League stint, another testament to their renewed philosophy – is just 0.5% shy of Wolves’ average. Lage’s three-at-the-back formation allows his team to retain possession efficiently. However Palace’s press will be an issue for them, and you only have to look as far back as Zaha’s opener last week to understand that even the most comfortable ball handlers are prone to the press.

Palace’s press will be a significant factor in this match against a side who are lethal on the counter. Despite Adama Traoré being benched for the majority of this season, their pace and accuracy has been critical to their success.

Raúl Jiménez’s work as a deeper lying number nine, that is so precise in his movement and passing, allows his quicker counterparts – often playing as a two behind him – to run ahead, in-behind and stretch the defence. Hwang Hee-Chan’s loan move is proving incredibly successful so far this season – with each passing game the permanent fee rises – and his efficiency on the counter is a large reason why. Palace’s main task defensively will be to blunt the counter-attack before it starts – a difficult ask – because, as they proved last week, once they have made transitioned into their defensive set-up they can be formidable.

The most impressive factor about these two revamped teams is not their upturn in results, but it is their resilience. You just don’t feel like any game is beyond them once they are out on the pitch. Wolves’ 10-minute three-goal comeback against Aston Villa is the stuff of dreams. Similarly, Palace, having conceded two mistake-laden goals, made their way from 0-2 down against Leicester City and only have their plethora of missed chances to blame for not taking all three points. It should be quite some game.

A mere five-and-a-half months after tearing his achilles, Eberechi Eze is in the running to make the first-team matchday squad for the first time this season. After expecting to be out for seven months or more when the diagnosis came back in May, he returned for 60 minutes with the under-23s last week. If not this matchweek, his return looks set for after the international break.

Nathan Ferguson is the only player unavailable following a similar achilles tear in May also. He looks to be about another month away.

A decision will need to be made on Marcal’s availability as his fitness is still uncertain as he deals with a calf issue.

Jonny, Pedro Neto and Yerson Mosquera are long-term absentees that will remain on the sidelines.

What do you get when two teams high on form with a resilient attitude clash? Usually a mind-numbing draw as both managers go the conservative route. It is doubtful this will be the case as both sides have shown confidence in attack against any side this season.

The first-half may be a bit slow, but expect it to pick up in the second with a grandstand finish.