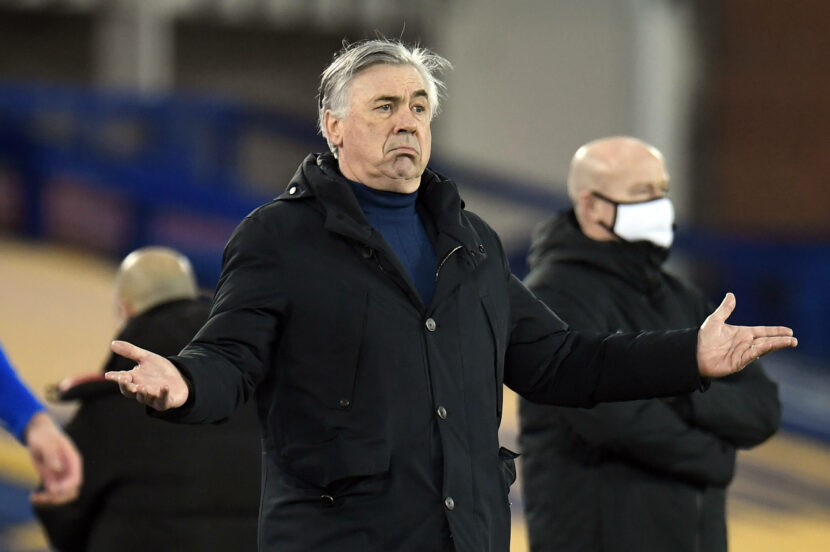 It’s only been two weeks?

We haven’t had an international break since November and we have been privy to an unprecedented 21 match weeks since that torturous time. A break in play was welcomed by some – a breather following a schedule of football like no other, that also included FA Cup rounds, replays and Champions League drama. While many others still in lockdown were counting down the days until football returned. Well, it’s back.

On the first real Premier League weekend in three weeks – the last one featured just four fixtures due to the FA Cup quarter-finals – Everton will continue their hunt for Europe under Carlo Ancelotti.

The hosts sit just three points adrift from fifth with a game in hand to boot. After two weeks rest for much of the squad, and the confirmation of an impending new stadium, Everton will hope to finish the season strongly to attain a place in Europe, starting with a favourable fixture this weekend.

The Toffees will play a Crystal Palace side, who probably weren’t too chuffed to see the international break roll around. Considering Roy Hodgson led them to a collective eight points from their previous 15 available, they may have wanted to see it continue. Also, the much-needed return and influence of Wilfried Zaha, and not to mention a Hodgson favourite in Jeffrey Schlupp, would have thoroughly boosted squad confidence.

Nonetheless, the stretch home for Palace presents considerably different than it does for Everton. Hodgson, who is out of contract at the end of the season, is in a position to lead the Eagles to their highest Premier League points total but, otherwise, there’s no relegation to avoid or European dream. But with many players also becoming free agents in June, hoping to finishing the season off with a touch of form in the hope of winning a new contract, or an alternate suitor, may make them a difficult side to face. Could that stretch of form start at Goodison Park?

On their travels this weekend, they will face a side coming off three consecutive losses prior to the break. A duo of defeats to Chelsea and Manchester City in the FA Cup, which is nothing to be ashamed of, sandwiched a surprising loss at home to Burnley. Everton have been particularly inconsistent this season and the match against Palace may precipitate another hiccup with the players, not necessarily the club, having much to play for as previously mentioned.

A near fully fit first-choice starting XI does bolster Everton’s chances. James Rodriguez’s return especially may strike fear in Palace hearts. After all, it was the Colombian’s mastery in the earlier season fixture between these two sides that was the difference. Rodriguez and VAR, of course. Handball interpretations have been softened, which may ease the mind of Joel Ward who was penalised for a contentious penalty-awarded call as Palace fell 1-2 to Everton at Selhurst Park in September.

Both teams possess pace on the counter, but in the month preceding the two-week break Everton – through fatigue, opposition intuition, or for some other reason – seemed to lose a bit of their own. There were persistent lapses in defence and they struggled to cohere going forward. If their confidence has remained sapped then they may struggle to break down a stubborn-again Palace who, aside from Tottenham and Man City inflicted humiliations, have regained their defensive solidity.

With Zaha back in the frame, could they also add a bit of offensive cohesion to their ranks? This may end up being a battle of the talisman and their respective influence – Zaha or Rodriguez. Who can haul their squad over the line?

Once again, Rodriguez is fit and should start this weekend. He leaves an injury list that still retains Jordan Pickford, Abdoulaye Doucouré, Bernard, and Fabian Delph, and maybe welcoming Ben Godfrey who seems to have picked up a niggle over the break.

Jean-Philippe Gbamin is also fit to start after only playing 135 minutes since his big-money move to the Premier League prior to this season.

Palace accrued no new injuries over the break – a much-welcomed change from the norm – although Cheikou Kouyaté is still returning and is still to be assessed from any internationally imposed damage.

While Tyrick Mitchell has fully rehabilitated his own muscle injury. Nathaniel Clyne and James McCarthy may require another week, but competition for places in their positions is strong so neither will be rushed back.

This should be an entertaining fixture. Palace can open up towards the end of the season, becoming more porous as evidenced last season, or more offensively potent as occurred the season before. Everton are the side with everything to play for and their visitors have nothing to lose. Will the Toffees overturn their pre-international break wobbles, or will Palace spoil the European tour?