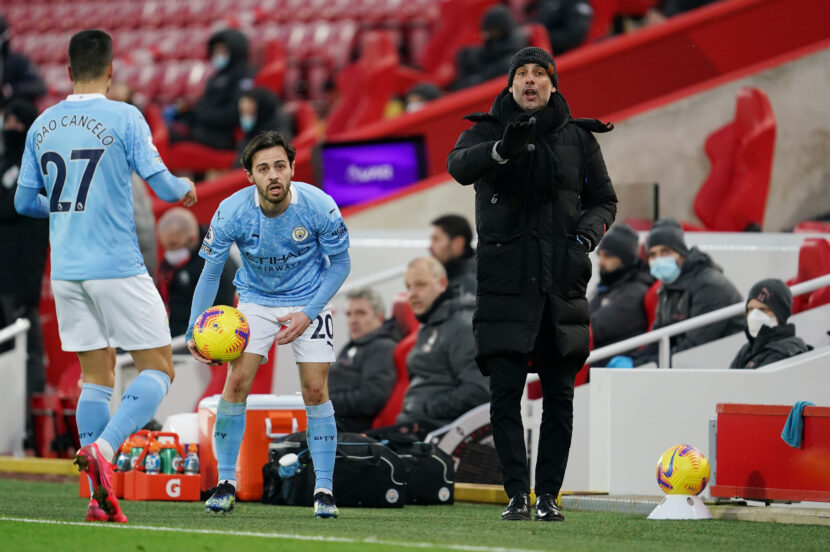 Currently in unstoppable form, Manchester City take on an erratic Everton, who are without their star-man.

With the teams below them continuing to falter, the Sky Blues have eloped from the rest of the competition. Once thought to be a multi-horse race, the race for the Premier League title seems like a solo adventure.

Everton, with two games in hand – this fixture is one of them – on the rest of the ‘chasing’ pack, will hope to close the gap in their pursuit for a European position. Although, the re-scheduled fixture possibly comes at the worst time for the club. Man City are in impeccable form and, despite the continued absence of previously pivotal figures, Pep Guardiola has masterminded his way back to the summit.

With Gabriel Jesus’s striker sense off the radar, and Sergio Aguero’s almost-complete rehabilitation feigning signs continuing for the best part of eight months, Guardiola has been without a fully functioning striker since the end of last season. Now in his fourth season, his ability to navigate a tumultuous COVID-hampered schedule, while striker-less and Kevin de Bruyne-less may be his crowning glory. Especially in what was shaping up to be the most evenly contested season in a long while.

They say shared pain brings people together, so maybe Carlo Ancelotti’s inability to call upon his own star-striker, Dominic Calvert-Lewin, may make for a lasting relationship between two managers with a rich history. Or so you would think. Actually, despite being in charge of a first-team for a combined total of 44 complete seasons, the pair have only met thrice. A winning record Ancelotti’s way masks the narrow 2-1 defeat at the Etihad last season.

It is now 412 days since these two teams last played and they are both in mightily different form patterns. Man City were chasing their tails – in no man’s land between the run-away Liverpool and the rest of the league this time last season. While Everton were beginning their resurgence under the newly appointed Ancelotti. Now, Everton face City on the back of a thoroughly deserved 0-2 Fulham victory with just eight points from their last seven matches. It seems their luck is finally catching up to them.

Could their recent form be their to-be-expected trending back to the norm?

Unfortunately, it doesn’t seem their fortunes will be any better after this weekend. City are the xGD champions-elect. An xGD of 28.5, nearly double that of Chelsea’s 15.7 in second, is virtually insurmountable as far as this season goes. They’ve conceded an xGA of more than 1.0 just twice since matchweek five. While Everton, on the contrary, have accumulated an xG per game of just 0.81 since the beginning of match week 14.

It’s a fixture that will be a significant struggle for Everton and the impotence and fatigued showing against Fulham, if replicated, could get them hit for a big score against Man City.

Ancelotti has not created a defensively resolute side either – evidenced by the seven goals they conceded in consecutive games against Tottenham Hotspurs and Manchester United. And that – a defense-focussed game plan against City – does not seem an effective or plausible ploy against Guardiola’s City, who produced four goals from an xG total of just 0.9 against Crystal Palace.

The potential absence of City’s leading goal scorer, İlkay Gündoğan, maybe some solace for Everton. But, as Pep has shown before: if he loses one soldier, another fantastically concocted tactical schematic takes their place.

Once hoped to be available for tonight’s clash, Calvert-Lewin has been all but ruled out of a return to the squad after a one-game absence due to injury. Allan will be permitted to return to the squad, most likely from the bench, following his recovery from a hamstring injury obtained in December last year.

Jordan Pickford will also remain on the sidelines due to a rib injury. Goalkeeper replacement Robin Olsen’s form has been indifferent, but here he will be presented with another opportunity to retain his starting berth before Pickford returns.

Guardiola recently hinted that mass rotation may be put into effect as his team prepares for three games in the coming six days. Aguero, injured in June 2020 and COVID-stricken later that same year, seems to finally be fit enough to return to the squad again. A possible substitute appearance may be on the cards.
As previously mentioned, Gündoğan may not feature at all against Everton due to a minor groin complaint but will return soon after.

Meanwhile, de Bruyne completed full training with the first-team during the week – the first time since a hamstring injury sidelined him in December. Fernandinho could also be returning soon following his recovery from a thigh injury. City are only warming up.

Lots of rotation won’t change the fact that this City side will be ruthless and out in force with a point to prove. Everton have struggled for consistency recently and looked fatigued against Fulham. Tonight’s opponents will be well-rested – and rotated – and may pounce on a tired Everton.