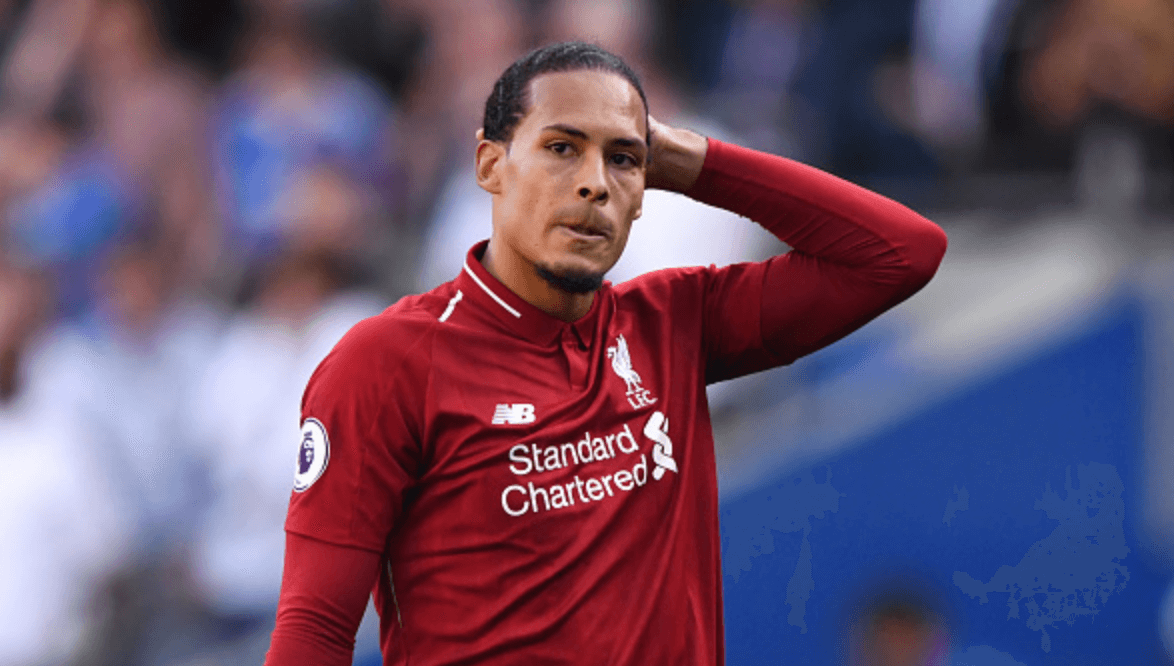 Every PFA Player of the Year in the Premier League era

Last night Virgil Van Dijk became the winner of the 46th Professional Footballers’ Association Men’s Players’ Player of the Year, becoming the latest name in a star-studded list of professionals to have bagged the award.

Below, we profile every winner since the Premier League’s inception in 1992. You should recognise some names…

Considered one of Ireland and Aston Villa’s greatest ever players, the then 33-year-old was a rock in defence as his side finished with the third best defensive record in the division.

Enigmatic Frenchman Eric Cantona bagged the gong in arguably his best season in Manchester, as the Red Devils retained the Premier League title.

Though his 18 league goals were only enough to see him to eighth in the list of topscorers, his all round displays were enough to see his peers vote him as their player of the season.

Scoring 34 league goals in 42 Premier League games for Blackburn in 1994/95, Alan Shearer became the first Englishman to win the Player of the Year award in the Premier League era.

He was the standout performer as Blackburn became only the second team to win the Premier League, sneaking over the line in one of the closest title races in top flight history.

Signed for what was at the time serious money, Les Ferdinand made an instant impact at Newcastle as they narrowly missed out on the Premier League title in 1995/96.

Ferdinand’s 25 league goals from 37 league games were enough to beat the likes of Alan Shearer and Robbie Fowler to the award, despite both scoring more goals than him.

As Ferdinand did before him, Alan Shearer joined Newcastle at the start of the season and set the world alight. He became only the second player ever to win the award twice (after Mark Hughes in 1988/89 and 1990/91) and the first in the Premier League era.

Finishing topscorer in the league for the third consecutive year, Shearer bagged the Player of the Year award to become the only player to have won the award twice with different clubs to date.

16 goals and an effortless style of play captivated audiences and players alike, as Bergkamp finished as joint fourth top scorer in the Premier League.

A Frenchman with nearly as much personality as Eric Cantona, David Ginola beat off the challenge of Manchester United’s treble winners as he claimed the award.

Winning the League Cup (the only domestic trophy United did not win), Ginola won the award despite Spurs finishing 11th in the league. He became the first player to win the award while playing for a team who finished out of the top two.

Though they failed to match the treble winning highs of the previous campaign, Manchester United managed to sweep all before them in the Premier League, winning by a mammoth 18 points.

Captain and midfield warrior Roy Keane was an inspirational figure throughout, scoring five goals and leading his side to their sixth Premier League title in the last eight seasons.

Despite being part of a Red Devils side containing attacking talent such as Andy Cole, Dwight Yorke and Ole Gunnar Solskjaer, Teddy Sheringham scored 15 league goals as United stormed to another Premier League title.

His 15 goals were just one less than he had managed in his previous three league campaigns combined, Sheringham defied the odds to enjoy one of his best seasons at the ripe age of 35.

A familiar name I am sure, Thierry Henry bagged his first PFA Player of the Year award in 2002/03 after a brilliant season with Arsenal.

His 24 league goals proved not enough to be the top scorer as he missed out to van Nistelrooy by a single effort, but this season was just a show of what was to come from the Frenchman.

Are you surprised? As his Arsenal side cantered to the Premier League title and the history books as the invincibles, Henry bagged 30 league goals.

He finished eight goals ahead of everyone else, and came second in the Ballon d’Or of 2003, missing out to Juventus’ Pavel Nedved.

You don’t win 95 points in a Premier League season and concede only 15 goals by accident. In the prime of his career, John Terry was a man mountain for Chelsea in 2004/05.

Terry made 53 appearances in all competitions, scoring eight goals. Part of one of the finest defences in Premier League history, captain Terry stood out as the best of the lot.

Scoring 10 league goals and finishing third in the Premier League with Liverpool, Steven Gerrard was voted the league’s best player by his peers in 2005/06.

He came third in the Ballon d’Or in 2005 behind Frank Lampard and Ronaldinho, but his campaign is perhaps best remembered for his stoppage time screamer against West Ham in the FA Cup final.

He was going to appear sooner or later. Cristiano Ronaldo’s first Player of the Year award arrived in recognition of his talismanic displays as the Red Devils won their first league title since 2002/03.

His 17 league goals were only a sign of what was to come however.

Undisputedly his best season in England, Ronaldo’s 42 goals in 49 games in all competitions helped United to a Premier League and Champions League double.

At the age of 35, despite scoring just four goals in 47 games in all competitions, Giggs was chosen as the best player in the League. At least he was more loyal to Manchester United than he was his brother.

Scoring 26 league goals, Wayne Rooney was on fire in 2009/10. Though his only silverware that season was the League Cup, he finished second top scorer in the league and impressed as United reached the Champions League quarter finals.

Though his season ended in disappointment with injuries and the disastrous 2010 World Cup campaign, Rooney had the consolation of the PFA award, meaning the last four awards had gone to Manchester United players.

Welshman Gareth Bale won his first Player of the Year award at the age of 21, after something of a breakthrough season for Spurs.

Though he bagged only seven league goals, his incredible talent was not to be ignored. You will surely remember his hat-trick in the San Siro, where he destroyed arguably the world’s best right back at the time, Maicon.

In his final season with the Gunners before famously moving to Manchester United, Robin van Persie proved unstoppable as he notched 30 Premier League goals.

His Arsenal side only managed to finish third in the league however, and it was this disillusionment with the lack of silverware that led to van Persie sealing a move to United in the summer,

His second Payer of the Year award, this was the season that Gareth Bale truly rose to the elite tier of world football, moving to Real Madrid for a then world record transfer fee at the end of season.

His 21 league goals were ultimately not enough to seal Champions League football for Spurs, but his knack of scoring spectacular goals meant Bale did not finish the season empty handed.

Despite missing the first few games of the season through suspension, Suarez bagged 31 league goals as part of the famous Sturridge and Suarez (SaS) partnership.

The return of Jose Mourinho brought the best out of Eden Hazard, who scored 14 goals in the Portuguese’s second season back at the bridge to help fire the Blues to the Premier League title.

It remains Hazard’s only Player of the Year award from his time in England, despite scoring more league goals in two of the more recent seasons.

The tricky winger bagged 17 goals in the league as the Foxes upset the odds to cause the biggest upset in Premier League history.

Having been a part of Leicester’s miracle the season before, Frenchman Kante repeated the feat with Chelsea after moving for £32 million in the summer.

Outstanding in his deep-lying midfield role, Kante excelled in Antonio Conte’s side as they just missed out on a Premier League and FA Cup double, losing to Arsenal in the final of the FA Cup.

Few expected Salah to have anywhere near the impact that he had in his debut season with the Reds, given his disappointing previous stint in the Premier League with Chelsea.

The Egyptian showed the Blues what they were missing as he set a 38-game-season record of 32 Premier League goals, as Liverpool finished fourth and reached the Champions League final.

Defensive colossus Van Dijk has been a revelation on Merseyside since signing from Southampton in a £75m deal, re-galvanising a Liverpool defence who have conceded just 20 league goals in 36 games throughout 2018/19.

Whilst Liverpool could feasibly end the season on 97 Premier League points and come short of the title, the performances of the Dutchman this season have not gone unnoticed by his fellow professionals, becoming the first defender to scoop the award since John Terry in the 2004/05 campaign.