Welcome to the 2nd edition of 90MAAT’s Football INDEX Insight blog. This week we are discussing Kylian Mbappe, our position on his price and what we intend to do with him this coming season.

This summer, France became the World Champions for the 2nd time and in doing so a new global superstar was born. Anyone interested in football will know the name Kylian Mbappe. The 19 year old has been prolific now for 2 seasons in the French Ligue 1, previously with Monaco and last season with PSG.

The most talented player of the next generation, his speed, skill and maturity blew everyone away from centre backs to pundits alike as France triumphed in Russia. 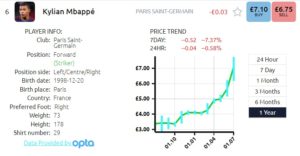 On the back of this success, Mbappe’s price on the INDEX has soared from around £5.50 pre-tournament to around £7 as seen in the chart above. This in itself is not unusual on the INDEX or in investing in general, a player or stock performs well and investors buy in causing more people to get involved and a price rapidly increases.

What is unusual at the moment is that despite a short lived dip in price to the £6 region, Mbappe’s stock has consolidated this week in the low £7 area.

Rumours of a move to Real Madrid might have explained the support trend of Mbappe’s stock, however there does not seem to be much behind the rumours and INDEX traders a notoriously quick to jump ship on an intangible rumour.

However, with no apparent mass sell-off, or a return to a sub £6 price looking likely (there has been a strong support established at £6.60-£6.80), there is not an immediately apparent way of profiting by selling Mbappe at the moment for the semi-passive investor.

The INDEX is still growing exponentially and the young Frenchman has many years of world class potential ahead of him. A good Champions League run is a possibility for PSG, although one that rarely comes to fruition, and if a move is on the horizon in the not too distant future then expect further price hikes.

Because of this, I will be holding Mbappe this season and expecting to see some major dividend returns from him as well as an increase in his price. I was lucky enough to buy in on him at £4.82 and I’m confident of making a merry profit in the future.

Touch wood he doesn’t break a leg… Of course that is just me, this is not advice and I could well be wrong so do what is right for you and I’ll let you know how this has worked out for me in the future!