The opening weekend to the Premier League season saw the likes of Liverpool and Manchester City pick up where they left off last time round as they effortlessly brushed West Ham and Arsenal to one side.

With the return of the Premier League came the return of Performance Buzz on Football INDEX! This aspect of the platform was introduced in the second week of last season and has helped the product go from strength to strength, adding a new dimension to match days for traders.

Over the course of the summer, there’s been lots of speculation on Twitter by Football INDEX traders as to who might be better value in the upcoming season. Something that popped up regularly was, ‘This player will be more valuable because they’re moving from a Non-PB League to a PB League’.

I can see the logic. Yes, the majority of players on Football INDEX have no chance of returning any dividends if they’re not playing for a club in one of the top five leagues in Europe, so moving to one of these clubs at least puts them in contention. But does Alireza Jahanbakhsh really stand much of a chance of winning Performance Buzz playing for Brighton following his move from AZ Alkmaar? Judging by last season, the answer is no.

It’s great to be able to take advantage of the trend by hopping on these players before they rise and then hop off before they dip back down again, but this can be a very time-consuming tactic that doesn’t necessarily yield a high enough reward.

I’ve been tracking the winners of Performance Buzz since Football INDEX introduced it and have some data that suggests you’re wasting your time investing in teams like Frosinone and Sporting Gijon if you want a realistic chance of winning any Performance Buzz dividends this season.

In this analysis I excluded winners from Champions League and Europa League games due to the unnaturally low player pools for the amount of dividends on offer. I’ve also only analysed data from 1st November onward as before this date there was only 200 players on Football INDEX, again, unnaturally small player pools.

You can check out the chart below if you’d like to know the highest yielding teams from last season. You can see the teams at the top are either dominant in their leagues or had a good European Cup run last season. In fact, in the top 30 teams, only four teams failed to qualify for Europe! 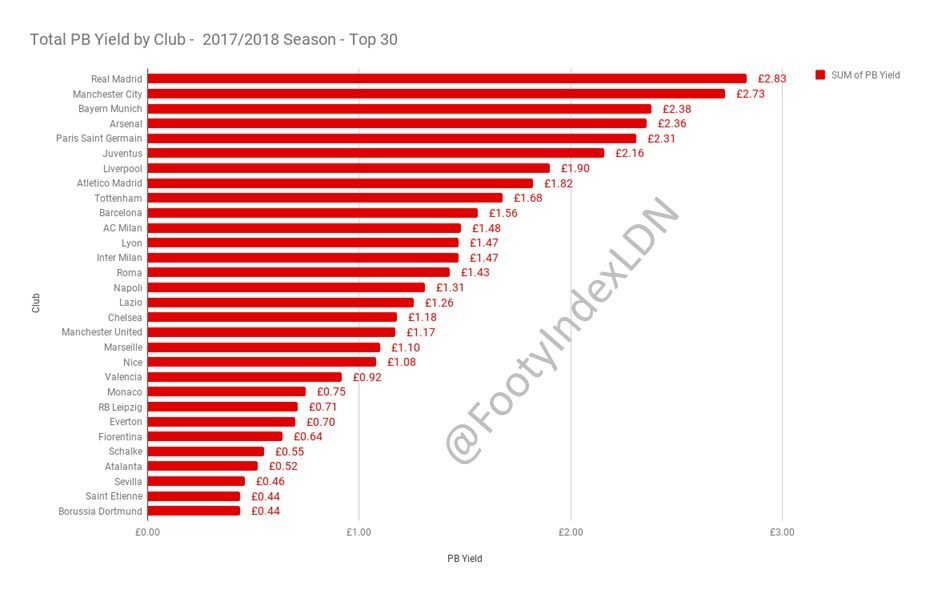 It will be interesting to see if the same clubs can replicate their Performance Buzz returns this season compared to last, but one thing I’m sure about is you will not be seeing Huddersfield Town, Fortuna or Huesca players on my 2018/2019 end of season graph!