Firstly, a big thank you to all of you that participated and helped spread the word about this questionnaire. With your help, I managed to pull in a modest 150 results over the week, which appears to be enough for a big enough data set to give a decent spread of responses. I’ve now scythed through the data and attempted to compact it all into one interesting article with all the most relevant parts included. Also, note that many questions appear to have a different number of responses, this is because some people didn’t answer all the questions or some answers didn’t fit the question and so had to be removed.

Without further ado, let’s get started with what are the characteristics of the typical indexer. The average trader has been on the platform 12.7 months and deposited £994 in their first month, which is a striking statistic to start with. I for one was surprised by the size of some of the initial deposits people were putting down, however that’s probably because of the increase in player prices since I started the index. Back then a thousand pound deposit could have bought you about 700 Neymar, now you can just about afford 70. This number was also dragged up by the big spenders, with fifteen respondents depositing over £2000 initially, with the highest being a huge £36,000 initial deposit. Total net deposits now are significantly higher at £7834 on average, this includes nine individuals whose net deposits are now zero or negative. But some huge investors with net deposits of £110,000 and £200,000 respectively drag this number up again. The majority have net deposits of between £1000 and £3000 as you can see from the distribution below. 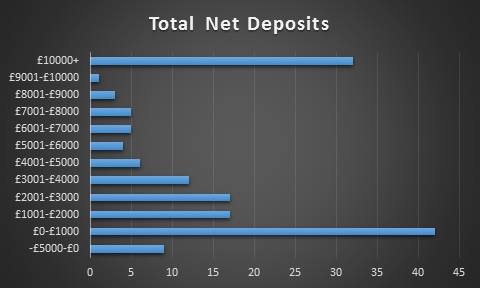 The average profit figure paints a similar picture unsurprisingly. A couple of people have made a loss, the worst being £900. At the other end of the scale is a £83,000 profit, with the average sitting at £7814, again, representing a huge variety in portfolio sizes, but to see only four people making a loss (two others also recorded profit as breakeven) shows that many have been successful on the index. The similarity between the two charts also demonstrated how profit is very relative to deposits and portfolio size (as if we didn’t already know that). Onto the players, clearly many have different strategies here too with the number of players owned ranging from 3 to 910. No that’s not a typo, that’s Nine-hundred and ten! The average is 57, which I personally feel represents the successful impact performance dividends have had on the platform because if I’d of asked that question two years ago the answer would probably have been about six. 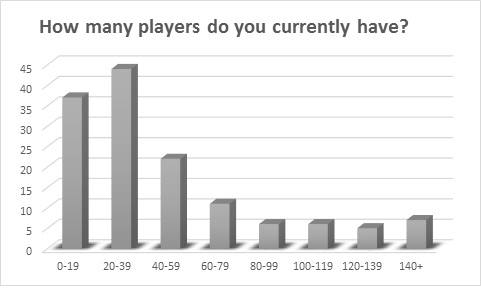 In terms of biggest holds by value, Neymar came out on top which is hardly surprising considering how expensive he is. In fact, of the twelve players who were more than one person’s largest hold by value, ten of them were in the top twelve most expensive player on the index. Only Kane and Mbappe failed to be someone’s biggest hold while J-Rod and Aguero managed to make the cut. Interestingly though, when we look at the largest hold by number of shares, it’s a very different picture. There were 97 different answers, with only five players being named more than once. Neymar was the most popular but only with six people naming him their biggest hold in terms of shares, while Ronaldo, Messi, Salah and Marcelo had two mentions. 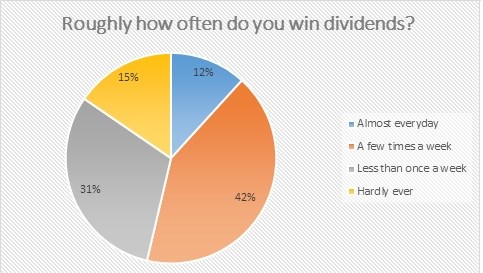 One area many people agreed on was who’d be top of the Index come January, with 108 (87%) saying Neymar would keep his top spot by the turn of the year, with Mbappe and Salah trailing in second with five votes each. The price of this peak-player was estimated at £15.80 with only three people forecasting a fall in the price at the top, showing the optimism many have in the platform. The five most optimistic of traders are expecting a peak-price of £22 or more. As much as I’d love to see it, I think the average response is a little more realistic.

The next forecasts that participants were asked for is their dividend predictions. Unsurprisingly it’s those at the top of the market that were voted the most with Neymar coming out on top for Most total dividends and most performance dividends while Pogba was voted most for media, which is already looking likely after picking up close to £1 in August alone. 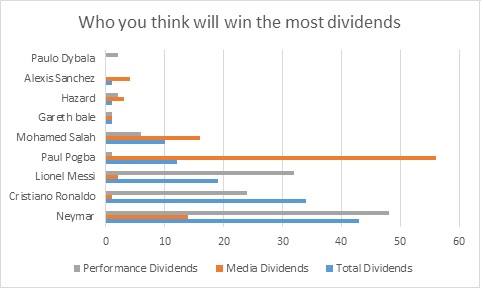 Moving onto just defenders, Sergio Ramos marginally came out on top with 23 votes, probably down his new role as penalty taker while Joshua Kimmich came in second with 21, despite irregular game time and not the best return or scores last season, many have stayed hopeful that he will hit form soon enough. Four Man City defenders managed to get five votes or more with Otamendi picking up the most. It could be interesting to see how many of those four get regular game time with such strong competition at the back for the Citizens. The results were no more clear-cut in the midfield department either with Isco and James leading neck and neck with 21 votes each. While the recently injured Kevin De Bruyne picked up 15, presumably by those who completed the survey before his spell on the sidelines was announced. 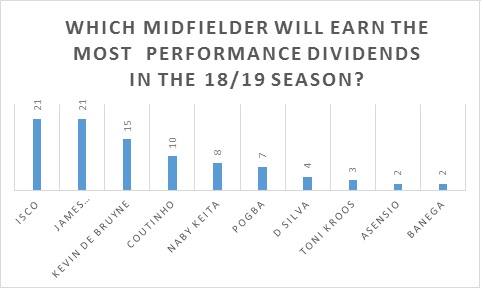 Finally upfront, there was some clarity in peoples thoughts, as Neymar swept up 50 votes, while Messi and Ronaldo made up the top three with 31 and 19 respectively. Meaning the trio made up 80% of the votes, and it’s unsurprising considering they made up three of the top four forward dividends winners last season. One man who hasn’t featured much is Harry Kane who received just two votes here as well as one vote previously for over top performance dividend winner, which maybe suggests his premium price tag isn’t expected to cut the mustard when it comes to dividends. Value is something people continually look for in the index and even though the top ten are pretty pricey these days, they can still represent value in an ever growing market. Especially when one star player win on the weekend still represents an instant 1.3% return on investment at Neymar’s current price. So who do people think is the most undervalued up there? Well it was Ronaldo who came out on top with 24 votes after his switch to Serie A over the summer and the man who’s trying to fill his shoes, Gareth Bale, that’s in second place. Interestingly, all top three are players who’s variables have all changed over the summer but it seems the FI community see those changes as for the better. Looking now at everyone answers to the yes/no questions it seems many are in favour of keeping the status quo which does make sense since some of these changes would affect player prices and many have their portfolio set up with the current system in mind. The only “yes” majority came on the introduction of order books, which we all know is coming at some point in the future anyway. It’s unsurprising people are all in favour of this change because it will help take the onus off football index as a company to dictate instant sell prices and allows traders to reach a price they’re happy to buy and sell at. The cut-off point has been debated in the past, whether it should be later to allow team news to be announced or even just allow more games take place before the cut off to increase in-play trading and volatility but it appears many are happy with it as it is at the moment.

Almost a 50/50 situation when it comes to the PB scoring system. Many believe assists should possibly be higher and things like chances created should be credited to allow adventurous players to pick up more points compared to those who just make five yard passes all game long. The argument against this, however, is that nine of the best performing Premier League players on the Index last seasons were in the official Premier League team of the year, showing that the correlation can’t be too out of whack. This final section is mainly for new users to get a feel of how the set up and communications of football index as a whole are perceived by traders. Overall, the answers are pretty good, with many people showing their satisfaction with the company. Of course, some traders have had a poor experience and the site has not come without its issues over the last couple of years but it has to be expected to some extent with a growing company, especially when considering the large number of transactions and money they have to deal with on a daily basis. As for the competitions, I for one am a big fan, they’ve given away some huge amounts of money in the past, although some may argue that the amount of cash needed for some of these is quite high, you can’t really expect them to give everything away for nothing. Although, a lot of the time they do, regular shirt giveaways and match day experiences can be won from simply retweeting a post and I can confirm first hand that these are legit since I was lucky enough to win club Wembley tickets for the England-Nigeria game before the World Cup. 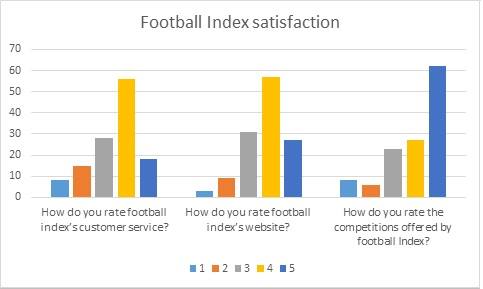 The final question was simply “give one tip to new traders” and while there were some great ones, I feel this article is long enough as it is without adding in 120 different tips, so I’ve rounded them all up into one paragraph of the most common and insightful pieces of advice there was.

Firstly, when you start up Read the rules. Use the football index academy and FIG beginner’s guide. A really simple thing to do but so many don’t understand how to sell or how dividends work so give yourself the best possible start by getting clued up. When it comes to buying, Do your own research– use football index edge and Index Gain to get yourself the data you want. Don’t follow “tipster” suggestions blindly and don’t have FOMO (fear of missing out). When selling don’t panic. Make your own assessment of the situation and understand that buy price is irrelevant. If you think a player is going to fall in value, consider selling, regardless of whether you’re in the red or the green for profit.

I hope this article has been interesting and useful for some of you and thanks again to those who participated. I look forward to producing a similar article in the future in order to look back and compare with today’s results.