Since the addition of Performance buzz dividends and the introduction of IPO’s which made over 1500 players on the platform purchasable, the variety of ways of making a profit have increased far beyond just holding for media buzz. Yet, these profitable trades can almost always be categorised into one of few types of trades.

The two main ways to profit on the Index come from dividends and capital appreciation and often the two are linked. However, trying to earn dividends is one of the simpler techniques of profiting on the index so we will start with that.

This is probably the most popular method and possibly the staple to any account. Therefore, it is useful to understand who frequently wins. It is normally apparent from those at the top of the market but here is a list of the highest dividend yielders from last season. 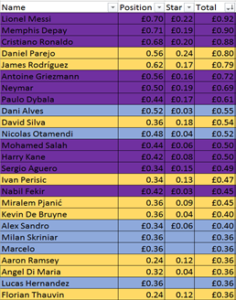 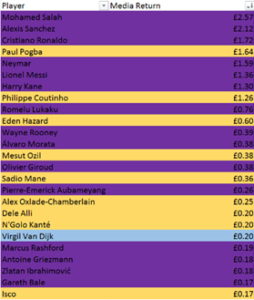 Of course, this data is not to be taken as a true indication of future potential but a rough guide as it is possible that some of the yields may be an unfair reflection on some player’s potential.

Some good examples of this include Sanchez who took home more than half of his yield in January during his transfer to United, Neymar, who although yielded well, missed the last three months of the season due to injury, as well as other changing factors like Mane and Hazard who are now recorded as forwards for the upcoming season which could have a significant impact on their returns, or Griezmann and Ronaldo who picked up a lot of their dividends thanks to successful European competitions which can’t be guaranteed for next year.

So clearly there is more to it than black and white data but many of these picks will be expected to continue in a similar fashion next season.

This can either go really well or really bad. The idea is to be the quickest person to react during a game to buy a player who has just scored. Obviously, not every player that puts the ball in the back of the net is going to see a rise so choose wisely when to execute this or you can easily end up stuck with a player and just forfeiting spread and commission eventually.

The times when goal scorers have most demand is during big games, when the player’s price is low (less spread/commission) or if the goal is going to take them top of their respective performance buzz category (especially if it is a good score before the 2pm dividend cut off period).

The key to this is usually to be “first in, first out” as most people getting in on the action have the same intention – that being to make a quick buck in a couple of clicks. As already pointed out it can be a high risk, low reward strategy but many still attempt it (including myself).

It is definitely worth quickly checking the players 24 hour graph before buying though to make sure you are not one of the last ones on. An example comes from Higuain scoring twice early on against Spurs in the first leg of the Champions League tie. He peaked over 20p higher than he was at kick off and then fell by half of that by full time. 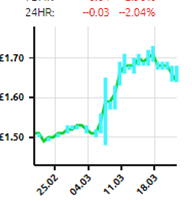 These can either be slow burners if you pick the players up outside of the transfer window or can be a nice steady, potentially “safe” part of your portfolio.

Getting in early can be very rewarding come transfer time when the expected move hits the spotlight. Transfer targets can be quite the opposite come transfer season when rumours hit a cycle of “confirmed” and “denied” prices can rise and fall dramatically.

This volatility can be taken advantage of but it certainly can come at a price too. Note that it only usually applies to players moving to big clubs, especially big English clubs and that once a deal is done it is not uncommon to see people take their profits when the media dries up.

This trend has become less risky recently as players fall less than they used to, for example, Jorginho, Fred and Fabinho are all the type of player who would have previously fallen dramatically after the deal, possibly by half of their value, but in the current market many people are happy to just hold and many players have performance buzz potential to fall back on if a deal was not completed which also helps sooth the blow.

Building profit in the build up

This is a fairly simple way of making a profit on the index and is based around the idea of being well prepared and buying early. One example of this being successful can be looking ahead to single match days, often Fridays and Mondays and looking for those who have a very good chance of winning.

If you look at these fixtures a couple of weeks in advance you can often be the first person in and others preparing after you will buy and raise the price, increasing your profit.

Now of course even when there are only two games it can still be hard to predict sometimes, even when you study the previous scores of those involved. However, as mentioned before you can look at who is most likely, and it is likely others will have the same findings as you and purchase.

One way to “ensure” profit is to begin selling the player before the game has even begun, maybe in the 24 hour period before hand where others are frantically making last minute buys. This way you take out the risk of that player not winning and falling in value again, which is likely to happen if this player would not usually have much chance of winning (this is likely to happen even if they do win but it may be prolonged by a day).

Of course, this also takes away the chance of winning dividends and maybe a further price rise on the back of an impressive performance so it is up to your own risk preferences as to how you execute this.

A good example is shown here from Keita Balde and Steven Jovitic in the run up to their two Friday night fixtures during February and March. In neither game did either of them win a dividend and fell almost immediately back to their start price on both occasions, however both saw substantial rises before the fixtures and if you bought early and sold in the build-up, an easy 10-20% ROI was very achievable from only tying up cash for a few days.

With this being said, not every player will rise this well and it’s important to make sure you are buying those who really will get demand. Being cheap and playing for the team that has an easy fixture or is likely to win are also favourable conditions for this kind of trade. 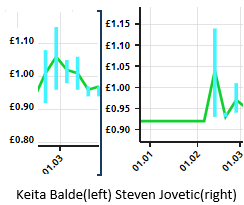 A more long term use of the same strategy is to buy players who are expected to do well in European competitions, especially towards the latter stages. There are currently many examples of this within the superior nations at the World Cup which saw impressive rises and never actually won any dividends.

This is an interesting one and often comes at the expense of another player, which can be useful to allow yourself to hedge, should you be content with holding both.

The idea is that news impacting one player will have a knock on effect onto another. The most common cases come after injury or suspension. They often happen quickly after the event but if you can think fast while others panic about their position in the falling player there is a good opportunity to profit.

A good example came from Jamie Vardy (left) after Kane’s injury ruled him out of the international break in April and Lucas Hernandez (right) after Filipe Luis’ season appeared to be ended by a nasty injury, allowing Lucas to step in for the remainder of their promising Europa League campaign. 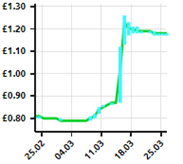 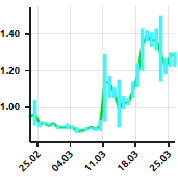 On the flip side of the above method, a very popular tactic is to purchase players who have picked up injuries and have seen a fall in price.

It makes sense sometimes for those who hold the injured player to sell to cut losses and use capital elsewhere while that player is out, however, if you do not already own said player, and have an opportunity to pick him up soon after the injury at a discounted price they can often be a long term steady hold back to fitness.

The biggest problems with this are knowing the seriousness of the injury first sometimes offers a trade-off of being in at a lower price and being sure the injury is not worse than first expected.

It also can lead to capital being tied up a while to get a substantial return but overall is another great way to use a situation to profit. For example, when Neymar picked up his three month injury he dropped below £10, he is now well above that, if you weren’t already aware.

Buy for the future

A technique that has been bad mouthed by many but profitable for many others. Lots of traders seem to have an obsession with young players on the Index and for those in early it can prove very beneficial.

Many who picked up the Likes of Phil Foden and Tahith Chong at 50p wouldn’t have dreamed of seeing them at £1.50+ so soon but that’s where they are.

The difficulty lies in the “where they’ll stop, nobody knows” attitude, many don’t know if they’re a good buy now because they have no idea what they’re actually worth. Equally, many don’t want to sell them in case they go up more making them somewhat of an anomaly on the platform.

It is a very valid point to argue that many players at prices similar to these young players have dividend potential and a much more clear reasoning to be held but if you’re looking for low maintenance diversity this seems to be a good option.

In summary, there are plenty of thought processes and trading ideas people like to use and the number of players available to buy allow for plenty of options to make money on the platform. Many will argue some are better than others but often a mixture of holds can be the best way to try catch every wave of investment.

Have other thoughts when it comes to types of trade? Let me know in the comments wherever you’ve found this article!