FPL: The power five midfield or the big three forwards?

Hey there, FPL maniacs! Hope the DGW22 & the high-scoring GW23 was not a chagrin for you. I would like to explore a subject we’ve all been riveting about throughout this season – The Power-5 Midfield or The Big-3 Forwards.

Around the halfway of every season, we are well aware of the ‘must-have’ players for our Fantasy teams and the same has been the case this season. We all know we have to own the likes of Kane, Salah, Sterling, Alonso, De Gea, et al in order to do well as they are the ones performing week in week out and are accumulating the highest points. The question here is – how do we manage to fit in all of the big guns?!

There are two basic approaches that our beloved FPL Community on Twitter have been recommending – Either spending the money on 5 best Midfielders or splurging on the Big 3 Forwards. Let us deep dive into each of these strategies…

The players I would classify under this category are the ones priced at £10.0 and above, i.e. Harry Kane, Sergio Agüero, Romelu Lukaku, Alvaro Morata, Alexandre Lacazette, and Gabriel Jesus. If at the start of the season you were asked to pick 3 out of them for your FPL teams, it would have been a tough task. But now that we are aware of the performance of over a half of the season – the job has been simplified.

There is no question about the selection of Sir Harry Edward Kane who has justified his price tag of £13 (at the time of writing the article) as he has been supercalifragilisticexpialidocious (yes, that’s a word – in case you were not aware).

The other two picks, however, would be a little strenuous as per the current state of affairs. Agüero & Jesus have been rotated by Pep and are not nailed for a start (although the former has at least 3-4 GWs to prove his worth until the latter is injured), Morata is completely out of form with only 2 goals in his last 8 PL starts, Lacazette last scored in GW15 and only has 2 assists to his name since then, and Lukaku has been pretty mediocre when it comes to ‘FPL returns or Points per GW’ (approx. 4.5 PPG).

This clearly shows the need to look out for mid-priced forwards and except Roberto Firmino, all the others have had an average season thus far – Wayne Rooney, Jamie Vardy, Daniel Sturridge (yes, he’s alive!), Jermain Defoe, Christian Benteke, Marcus Rashford, etc.

Bottom Line – It is not worth spending over 1/3rd of the budget on these forwards, as per the current scenario. However, be prepared to tweak your teams with a couple of transfers as I believe we’re in for a lot many big hauls from the elite players – just like we witnessed in GW23.

Word of advice: Do not completely rule out this approach just yet as we all know a front-line of Kane- Agüero-Firmino will make up for your half the points almost every week (provided Agüero starts firing and makes the most of the next 3 easy fixtures). However, only after Jesus is fit and available will we know the way Guardiola plans to utilise both of them.

I would personally stick with Kane, Firmino, and a cheap 3rd forward for now as I have gone for a pretty ‘balanced’ side, but for someone who is looking for a differential, you may want to look at Sergio to help you climb the ranks (Although a risky punt, but a great shout for the captain’s armband this week at home vs Newcastle).

Warning – You may end up spending around 40% of your budget in acquiring the 5 of these and would have to put together the rest of the team somehow within the budget constraints, but it will all be worth it if you do so wisely.

Midfield has been the highest-scoring category in FPL this season and to give you an essence of it – 11 Midfielders have already crossed the Total Score of 100 by GW 23, as compared to 4 Defenders & Forwards each. Hence, it is only logical to spend the most money where the returns are the maximum.

As things stand, if you were to pick a ‘Power-5 Midfield’ of big guns that consistently perform, it would cost you a bomb – a total of £52.1 as in the below example:

Although the above is just an illustration, it shows that it would almost be impossible to spend so much for 5 players and still do well every week. But obviously, as we all know, Sanchez & Hazard are not worth the kind of money you would have to spend and hence it gives you an opportunity to fill in those 2 positions by mid-priced midfielders like Son, Mahrez, Arnautovic, Lingard, Pogba, etc. Doing so would also open doors for buying one or even a couple of premium defenders. (GET IN ALONSO!)

(P.S. – Do keep an eye on Alexis if he moves to United, might finally be worth the extra £2-3 you would have to spend).

Most importantly, since it is easier to load up the midfield without shelling out a fortune, a Kane-Firmino forward line and an Alonso-Otamendi backline can also be managed conveniently (substitutes to be compromised in some cases).

Have a look at the team below – 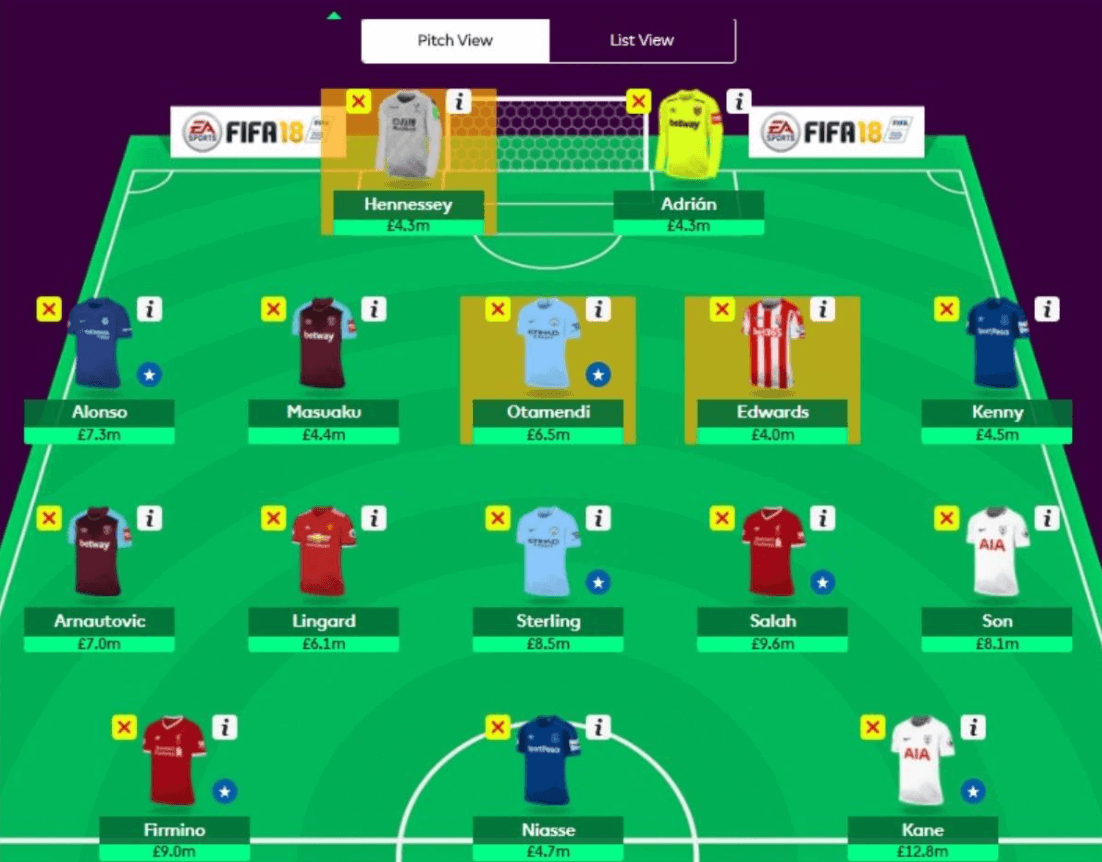 Guess what? Even at the current prices, you can still have the above team at around £103.1. Now assuming you own some of these and have gained in team value, with a few tweaks your perfect squad is easily achievable. Moreover, your starting 11 does not necessarily have to be the same every week and you can rotate your 3rd striker, 5th midfielder, and the 3rd defender depending on the form and fixtures (in case of unexpected injuries / if any of the Big-5 doesn’t deliver, that is).

Eventually, it all boils down to the kind of returns a player is contributing to the team as against the price paid. I am of the opinion that a balanced side (as explained above) is the best bet at this point of the season and same has been successfully implemented by some of the top FPL Managers around the world.

Until the likes of Agüero, Hazard, Alexis, Morata, Lukaku, Jesus, etc. start flourishing this season, let your chosen Power-5 prosper! May you grow in rankings by leaps and bounds.