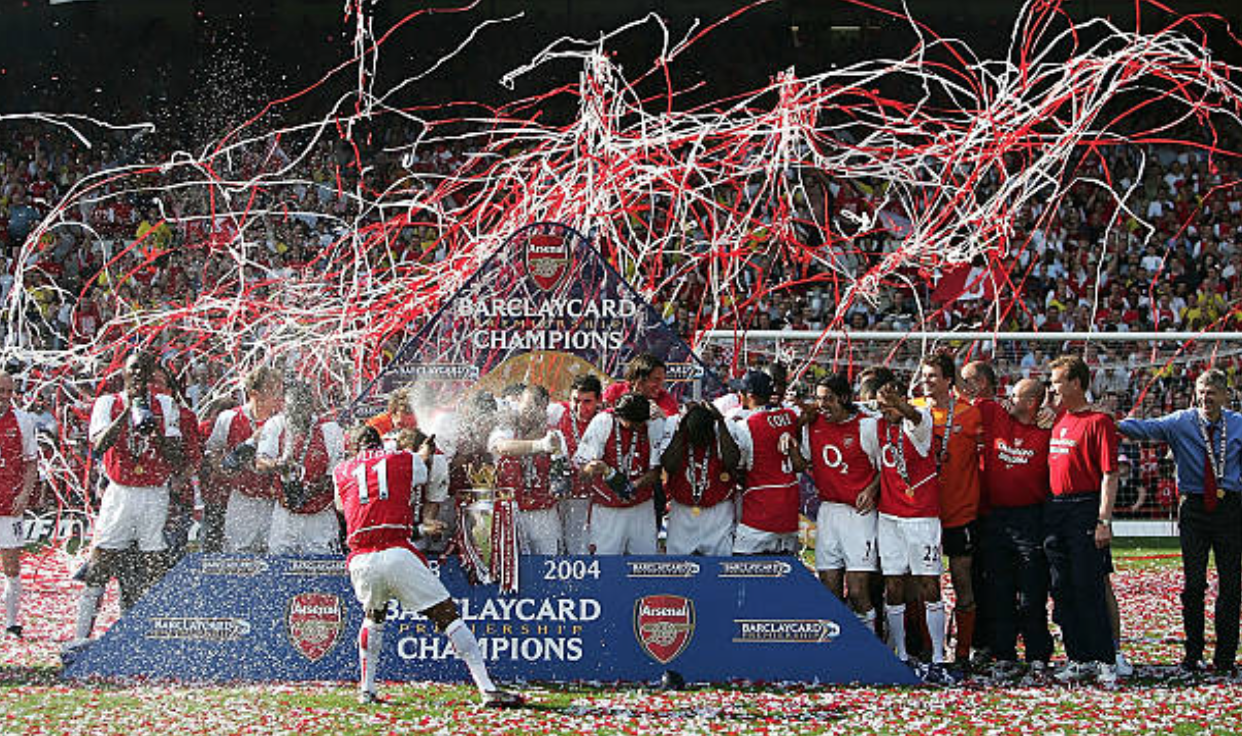 Welcome to Glory Days, a new 90MAAT feature series that looks at the greatest season in the history of each Premier League club.

The season we choose will usually be a campaign referred to by fans of the club as something akin to “glory days” – the times when it was great to be a fan of the club and when timeless memories were made.

First up it’s North London giants Arsenal, and it’s not too difficult to work out which season we’ve gone for. Yes, it has to be the Invincibles of 2003/04. With over 40 domestic honours to their name since their inception in 1886 (initially known as Dial Square), the Gunners history has been littered with success, but one season stands out above them all.

Winning 26 games and drawing the other 12, Arsenal finished the season on 90 points, 11 ahead of second-placed Chelsea. The two were closely locked in battle in the first half of the season before the Gunners ran away with it after Christmas.

Both league meetings between the two sides ended in 2-1 wins for Arsenal, the first of which ended Chelsea’s own unbeaten start to the season in October.

There were several rocky points throughout the season, games in which it appeared the Gunners’ unbeaten record would end; none more so than the infamous visit to Old Trafford in September, perhaps the most entertaining 0-0 of all time.

Patrick Vieira’s red card, Ruud van Nistelrooy’s penalty miss and Martin Keown’s jump in the Dutch striker’s face are iconic moments in the history of the Premier League, and though neither side realised it at the time, van Nistelrooy’s inability to keep the ball under the bar enabled Arsenal to go on and become the Invincibles.

Arsenal found themselves behind in nine league games over the course of the season and came back to either win or draw all of them. Another particular game of note is the early season trip to Portsmouth, where a penalty from Thierry Henry cancelled out former Spurs striker Teddy Sheringham’s opener.

Despite both goals coming in the first half and both sides having chances to win the game after half time, Arsenal drew criticism from Pompey manager Harry Redknapp as well as fans, who felt Robert Pires dived to win the crucial penalty.

The Gunners were undisputedly the best side over the course of the campaign, which was famously won at White Hart Lane with four games still to play.

Backed by a rock solid defence and a lethal attack, the 2003/04 Arsenal team was arguably one of the most complete and balanced sides of all time.

The Gunners were quietly active in the summer transfer market in 2003, bringing in Jens Lehmann, Cesc Fabregas, Gael Clichy, Johan Djourou and Philippe Senderos all for nominal fees, though only Lehmann was to play a serious part in the campaign.

German goalkeeper Lehmann was ever-present in the league, having been signed to replace the departed David Seaman. The Arsenal goal was further protected by defensive stalwarts Lauren, Ashley Cole, Sol Campbell, Martin Keown, Kolo Toure and the legendary “he’s bald, he’s sh*t, he plays when no one’s fit” Pascal Cygan.

In midfield, the regular four of captain Patrick Vieira, Gilberto Silva, Robert Pires and Freddie Ljungberg were backed up by Ray Parlour and Edu in what was one of the most experienced and successful midfields in Premier League history.

Incredible depth and experience in that squad, but it was fairly old. Most players would not remain with the club for more than a year or two after the season and the Gunners are still waiting for their next Premier League title.

Few fans will remember Arsenal’s exploits in Cup competitions in 2003/04. They did not win anything, though their results were more than respectable in the grand scheme of football. They made hard work of it though, enduring something of a nightmare start despite their ongoing league success.

Having won the FA Cup in 2002/03, Arsenal began their season attempting to retain the Community Shield, facing reigning league champions Manchester United. The match finished 1-1 after extra time, despite Arsenal being down to 10 men from the 72nd minute onwards following Francis Jeffers red card for violent conduct.

Shootout misses from Giovanni van Bronckhorst and Robert Pires meant the trophy headed back to Manchester, despite Ruud van Nistelrooy also failing to score his spot-kick.

Their next foray into a cup competition saw the Gunners enter the Champions League group stage, drawn with Inter Milan, Lokomotiv Moscow and Dynamo Kyiv. What appeared a fairly straightforward group turned out to be anything but as Arsene Wenger’s side was embarrassed at home to Inter Milan losing 3-0 whilst gaining only one point from trips to Russia and Ukraine.

It took an 88th-minute winner from unlikely hero Ashley Cole to beat Kyiv in the return fixture, which kickstarted Arsenal’s European campaign into life. The next game saw the Gunners travel to Milan, where they ran out 5-1 winners in one of Arsenal’s most memorable European nights. Needing to win at home to Lokomotiv in game week six, goals from Freddie Ljungberg and Robert Pires saw Arsenal qualify for the knockout stages for the first time in three seasons.

They beat Celta Vigo home and away in the round of 16 to set up a quarter-final showdown with fellow London club Chelsea. It was to prove the end of Arsenal’s European dream however with Chelsea winning the second leg 2-1 at Highbury after a late winner from Wayne Bridge after the first leg finished 1-1.

Continuing the theme of starting slowly, Arsenal required penalties to overcome lowly opposition Rotherham United in the third round of the League Cup. The game is perhaps best remembered for its monstrous penalty shootout that finished 9-8 to Arsenal, with both keepers taking and scoring spot-kicks before Sylvain Wiltord scored to send the Gunners through after Rotherham defender Christopher Swailes saw his second penalty saved by undisputed Arsenal hero, Graham Stack.

The Reds breezed past Wolves and West Brom in the fourth and fifth round respectively, landing them a two-legged semi-final tie against Middlesbrough. In what certainly became the low-point of the season, Arsenal lost home and away as they bowed out 3-1 on aggregate.

Despite facing a seemingly stronger set of opponents, Arsenal’s run to the semi-finals of the FA Cup was a much simpler affair than the Rotherham debacle in the League Cup.

They faced no club outside of the top flight and dispatched Leeds, Middlesbrough and Portsmouth whilst also edging past Chelsea as they earned a meeting with the season’s closest rivals, Manchester United.

As in the Community Shield, it was the Red Devils who came out on top, winning 1-0 at Villa Park courtesy of a well-worked goal from Paul Scholes. The loss ended Arsenal’s run of 18 FA Cup games without losing, a run which lasted since the 2001 final.

Having beaten Chelsea three times already that season, Arsenal went into their Champions League quarter-final as favourites to progress to the semis. The first leg was at Stamford Bridge, finishing 1-1 as Robert Pires cancelled out Eidur Gudjohnsen’s opener.

With an away goal and home advantage in the second leg, Arsenal’s chances appeared even brighter when Chelsea defender Marcel Desailly was sent off in the closing stages, ruling him out of the return fixture.

But it was not to play to the script. Having said this, it did appear to be for long periods with Jose Antonio Reyes edging the Gunners in front on the night just before half time. But they were unable to hold on as an error from Jens Lehmann handed Frank Lampard an equaliser on the night which looked for long stretches as though it was going to take the tie to extra time.

But the game was to be won in the regulation period when unlikely hero Wayne Bridge finished a scything one-two with Gudjohnsen to send Chelsea through to the semi-finals, where they lost to Monaco.

It was a bitter blow to Arsenal who looked in control of the tie for long periods only to lose it in inauspicious fashion. The steel and defensive solidity that was the catalyst for their unbeaten league campaign abandoned them for 45 minutes which destroyed their ambitions of European glory, in a season where the Champions League appeared wide open.

It would have been very easy to pick the comeback 4-2 victory over Liverpool or the final day 2-1 win against Leicester that confirmed Arsenal finished the season unbeaten, but the context of winning the League title at the home of your bitterest rivals means this is the moment that fans will cherish above all others.

They didn’t actually win the game, falling foul of an injury-time Robbie Keane penalty that sealed a 2-2 draw after Arsenal had led 2-0. The point was enough to seal the title however, after Chelsea suffered a defeat to Newcastle just before kick-off.

With four games still to play and no cup competitions left, the focus switched onto completing the invincible season, which they did with relatively little difficulty in the following weeks.

Sol Campbell is famously reported to have said “I always dreamed of winning the league at White Hart Lane. So I left and joined Arsenal.” As a boyhood Spurs fan and player of nine years, I think it’s fair to say Sol Campbell is not the most popular person in the white half of North London anymore.

In avoiding defeat in all 38 of their league fixtures, Arsenal joined Preston North End as only the second English club to have gone an entire top-flight season unbeaten. Preston’s record was achieved in 1888/89, in the Football League’s inaugural campaign, meaning Arsenal are the only team to have matched the feat in the last 130 years.

Arsene Wenger won Premier League manager of the season, while Thierry Henry scooped both the PFA and FWA Player of the year awards. During the season, Henry also finished second in the FIFA World Player of the Year award and Ballon d’Or, losing out to Zinedine Zidane and Pavel Nedved respectively.

So that’s the story of Arsenal’s greatest ever season. The unbeaten record eventually stretched to 49 games before being ended by old foes Manchester United in October 2004. Will it ever be broken?