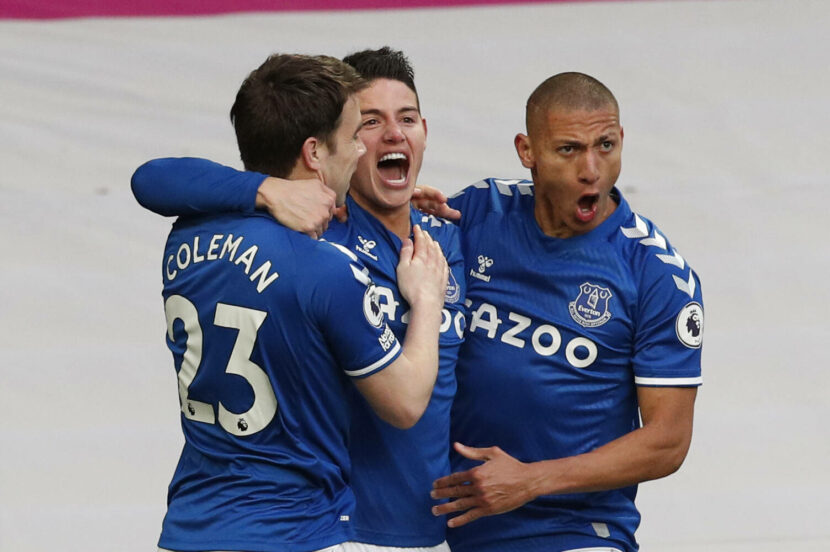 The Everton playmaker continuing to make an impact at Goodison Park

Not a match goes by and James Rodriguez’s Golden Boot – collected after a dazzling 2014 FIFA World Cup run with Colombia – is not mentioned. But the midfielder is proving to be much more than just a winner of years gone by for both Everton and coach Carlo Ancelotti.

His goal seemed to be the winner for Everton, if not for Michy Batshuayi’s equaliser near the death of time in Monday’s 1-1 draw with Crystal Palace. Yet the goal was only the cherry on top of the icing – to use a cliché – for his performance.

His leadership, tactical nous and poise set him apart from his peers and foes. From the first whistle to the moment he was substituted as Everton attempted to retain their lead he was the leader as much as captain Seamus Coleman was.

When Andre Gomes went down before the half-hour mark, Rodriguez was the one to bend down and console his compatriot. Whenever flares appeared to be reaching boiling point, Rodriguez was the one to ease the tension, first amongst his teammates and then with the opponent. Adding this leader mentality to his game, especially as he gets on in years could prolong his career. At 29-years-old he is definitely not near the end but adding an extra string or two to his already accolade-laden bow will benefit all.

He has also already shown his ability to adapt to the pace of a game and, especially, football in England, which is notoriously more demanding than other leagues on the planet. On too many occasions to count on Monday Rodriguez dropped deep, almost in line with his central defenders, to collect the ball, or just distract the opposition, and open up the field.

His movement confused the Palace midfield, shifted the focus towards him and allowed his fellow attackers to venture forward into space and often Seamus Coleman and Lucas Digne were the beneficiaries out wide.

He also showed an ability to drop deeper in defence and help out in the absence of Allan and the abrupt forced removal of Gomes. He guarded the space well, tackled, intercepted and competed even with those who were obviously more physically capable than he was; he remained a nuisance defensively.

All these qualities mentioned will be important in order for Rodriguez to both continue to succeed in England and ensure it lasts a long time. As he ages, he may well drop back deeper into midfield. And, with time, his experience and already evident leadership abilities could prove to be invaluable to his pupils.

Although, for now, his and Everton’s focus will solely be on securing European football next season. Either way, as fans we have the luxury to sit back on our couches and enjoy the fruits of his ever-growing basket of traits.