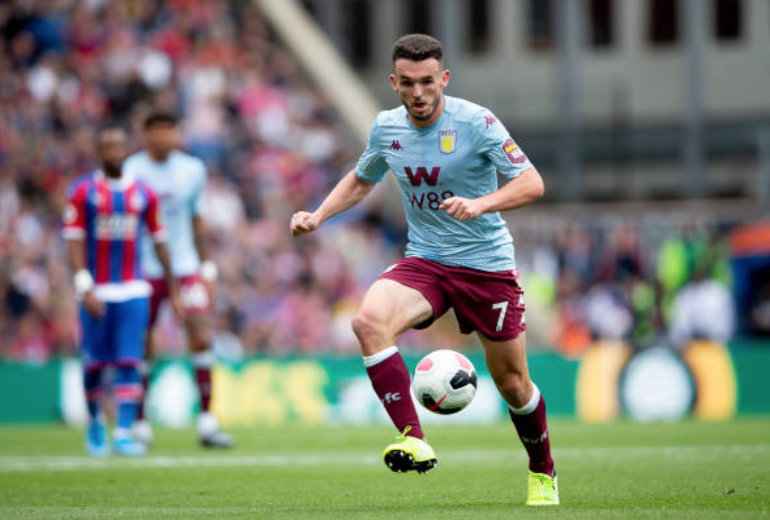 “It’s John McGinn and he gets his shot away! And Villa have staged their smash and grab here! They’ve been under so much pressure in the opening eight minutes, but it’s the Premier League new boys who strike first!” – (10/08/2019)

Yes. John McGinn. The man responsible for both of these commentaries. The former, the last goal Aston Villa scored in the Championship. The latter, the first goal Aston Villa scored in their return to the Premiership. And with the phrase “Aston Villa’s prized asset” – many are now picturing slick-back hair and low sock height and whilst they would be correct, the last year has seen a 5ft 10 Scottish man named John McGinn fit into that category as well.

McGinn impressed under Steve Bruce’s derisory tactics, scoring a belting volley from 30 yards in a 1-2 defeat to Sheffield Wednesday with some calling for a Puskas Award nomination. Since Bruce’s departure and Smith’s arrival, McGinn has settled into a 4-3-3 formation, playing predominantly on the right of the three central midfielders, rotating with Jack Grealish to supply the wings and forward line.

McGinn isn’t the biggest of players, but he uses his body all the time to shield the ball and turn out of impossible situations to run towards the goal and push the team forward. Not only is this extremely effective for Villa’s defensive game but it helps the forward line make runs and drag the opposition defence out of space, as they know McGinn will emerge with the ball. His own contribution of goals and assists just seems to compliment that.

Winning the Player’s and Supporter’s Player of the Year awards last year goes some way to telling you what each corner of Aston Villa Football Club thinks of the £2.5m man, signed from Hibernian after Villa’s turbulent rollercoaster of financial doom and glory last year. Thank God for Villa fans, that they didn’t end up going bust. Partly because John McGinn has been nothing short of sensational since his move from Edinburgh to Birmingham.

Villa fans at first asked, ‘who?’. But Hibs fans replied, ‘you’ll see’. Now the whole world has seen after John McGinn helped Villa get back up to the Premier League after a record 10 game-winning run. He’s started this year as he finished the last to, busting a gut to go forward and latching on the end of a ball which most players wouldn’t even bother to chase. He scored the goal that sent Villa up and now he’s scored the goal that kicks off their season. But it’s not just his goals, it’s his attitude, work rate, and ability to see things no-one else sees. Hence the nickname, McGinniesta.

Villa fans pretty much knew the moment he kicked a ball last year, but as previously mentioned, the Premier League is now realising just who John McGinn is. WhoScored rated him at 7.5/10 for the Spurs game and at 7/10 for the Bournemouth one. Quite impressive stats for a little known Scotsman making his Premier League debut. Continuing on the numbers front, his Fantasy Premier League price has risen from £5.5m to £5.6m due to his impressive start. If you don’t play Fantasy Football, then take a look at how the papers value him in today’s market.

Over the summer, McGinn was linked to Manchester United for £50m, supposedly recommended by Sir Alex himself. Although this was just paper talk, it does go to show how John McGinn’s value has rapidly risen in the last year, in both fantasy and reality. John McGinn quickly dispelled the rumours by coming out and saying:

“Obviously you see bits and bobs but my intentions were pretty clear and the club were aware of that. I didn’t want to leave this summer. “I feel loved here, I feel respected by everyone – the players, the coaches and I was keen to prove that I could play in the Premier League with Villa.”

The Villa faithful believe he’ll be integral in keeping them up. He’s been excellent most games they’ve played this season, as have Villa really, barring some silly mistakes and some rushes of blood to the head. Many are hopeful that Villa can build on their only win this season against Everton to really start a survival charge – because irrespective of what any Villa fan says, 99% of their fans would take 17th and run this season, considering they nearly went out of existence last summer.

If Villa do end up going down, John, as much as he would want to stay, would have many suitors. A man who loves to put his foot in and loves a yellow card, racking up 14 last season, frightening the life out of Villa fans as he could’ve missed the play-offs with an automatic three-game ban. He contributed on most fronts, most importantly grabbing seven goals and nine assists over the course of the campaign.

The bottom line is – he’s as much a part of this Villa team as Grealish. The friendship they’ve built up really means it could be the start of something very special in central midfield for Villa. We’re talking about a generation that’s looked back on in years to come. Much like the ‘glory days’ of Peter Withe & co, and the ‘Martin O’Neill era’. As he says though himself – as ever, very modest – he has a long long way to go…

“It’s been an OK start [to my Aston Villa career] but there’s a lot more to come from me.”

The football world can be very confident that John McGinn’s stock will continue to rise as a star in English football.

I’m certainly in on the McGinn hype too.