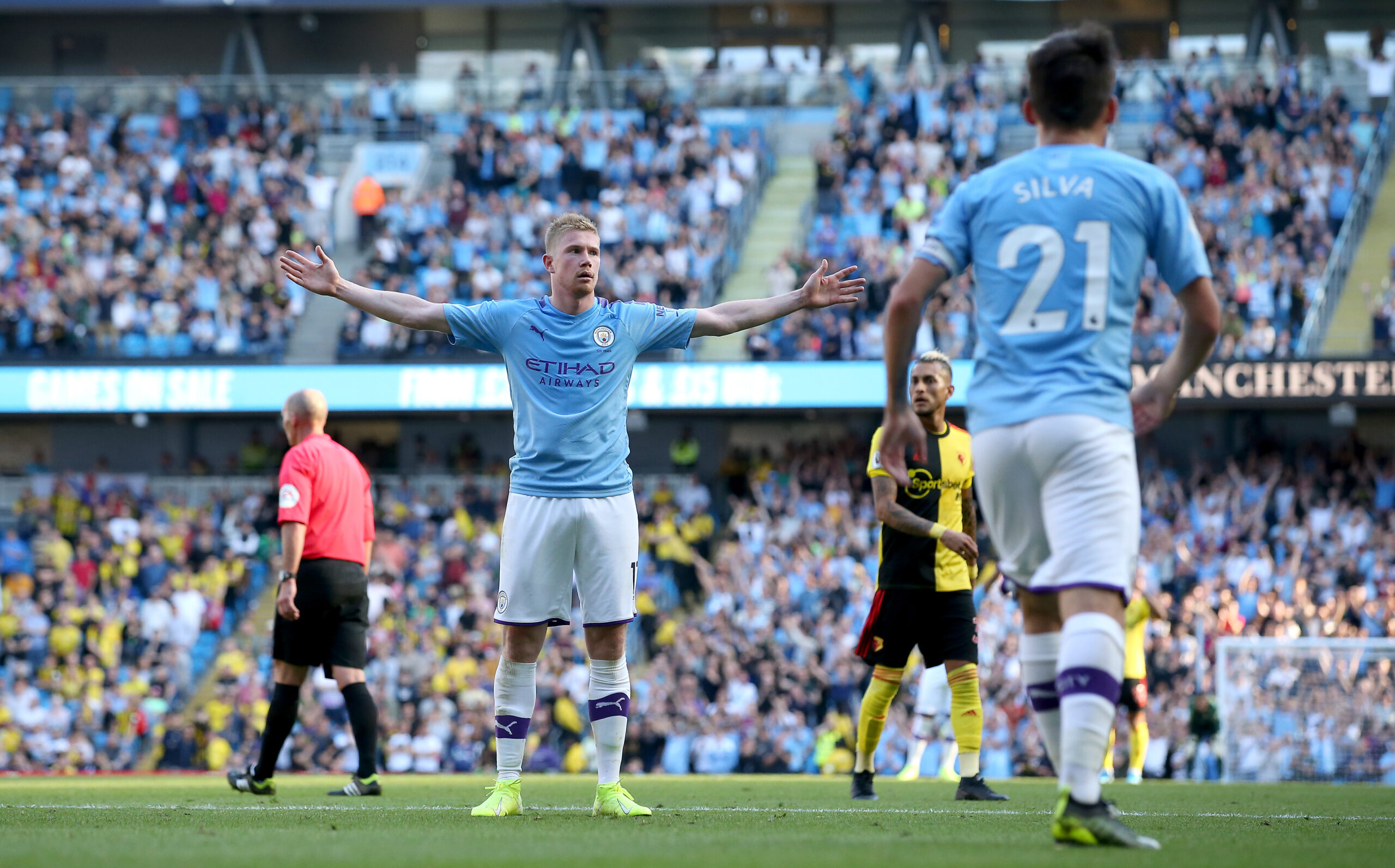 Kevin De Bruyne: the magician lighting up the Etihad

Manchester City bounced back from a surprising defeat at Norwich City the weekend before last by producing a simply scintillating display to humiliate Watford 8-0 at the Etihad on Saturday.

Despite the victory, Pep Guardiola’s men remain five points behind Liverpool and are already seemingly playing catch up, with Jurgen Klopp’s side consistently picking up the points. Nonetheless, this last performance was certainly a reminder to anyone that may have needed it that City remain hungrier than ever to claim a third consecutive Premier League title.

Further to this, the demolition job of the Hornets highlighted once again that, on their day, Guardiola’s men are one of the best teams to have graced English football.

And while City are overflowing with world-class talent, one man, in particular, stood out on Saturday for his devastating performance: Kevin De Bruyne.

It’s certainly not easy to stand out in a Manchester City team that has such supreme talent, yet De Bruyne appears to do just that – and with consummate ease, may I add. The Belgian is regarded as one of the best midfielders in the league (and the world) and he produced yet another performance to reinforce this belief on Saturday.

Wasting absolutely no time whatsoever to get into his stride, he produced perhaps one of the best passes we’ve seen this season, allowing David Silva to tap home after just 52 seconds. The 28-year-old received the ball midway inside the Watford half and it appeared as though there were limited options – feeding Kyle Walker or turning back to Rodri being the obvious choices. But, De Bruyne specialises in seeing things not many/no one else can see, doesn’t he?

Instead of taking the easy option, he whipped an inch-perfect pass to the back post that took out five Watford defenders and Ben Foster in the process – leaving David Silva with the simple task of poking home.

If they hadn’t already known, the Hornets’ defence were in for a long afternoon and in the blink of an eye, the Citizens found themselves 5-0 up after 17 minutes. De Bruyne went on to claim another assist and also had a hand in two more goals, before deciding he wanted to get in on the act himself and ended up rifling home a venomous shot from the edge of the area five minutes from time.

Overall, the midfielder created eight chances in the match and completed 4/4 take-ons. Mesmerising.

If there’s one thing people have learned about manager Pep Guardiola, it is that, well…he hates losing. So much so, that after suffering their first league defeat of the season to Norwich last week, City have gone out and scored 11 goals in their next two matches without reply. See?

De Bruyne was, controversially, rested against the Canaries and the team paid the price as they lacked creativity and were bereft of ideas. And so, his manager restored him to the starting lineup against Shakhtar Donetsk in the Champions League – and he shone. The star player took it upon himself to set the tone that night in a tireless display in order to return to winning ways, assuming a leadership role in the process as they ran out 3-0 winners.

And on Saturday, it was once again he who starred and showed the grit and determination that we have come to associate with Pep Guardiola players. As previously mentioned, he was instrumental in allowing the Sky Blues to fly out of the traps – his world-class pass creating the opener after just 52 seconds. Throughout the match, De Bruyne kept playing as though his side were chasing the game – a massive credit to his fitness and desire.

Manchester City’s number 17 was the heartbeat of the team, intelligently picking up pockets of space and Watford simply couldn’t cope. If the defenders came to him, he would play the ball around them, but if they backed off, he’d still find his target or he’d have a go himself – they hadn’t a clue.

So, yes, he was instrumental in helping his side embarrass the Hornets. And just when they thought the scoring would stop at seven, De Bruyne decided that he wasn’t done for the day and unleashed a beautiful shot into the top corner towards the end.

The best part? His celebration was as though he was saying “my work is done” to the crowd, holding his arms up and revelling in the applause.

Yes, the former Chelsea reject was utterly sensational against the Hornets, but this isn’t new for him. He’s started the season with a point to prove, having already made seven assists in the first six matches of the new campaign. Not bad, right?

As a result of this fine start, he’s now got his eyes set on Thierry Henry’s assist record which stands at 20 for the season. At the rate KDB is going, he is expected to surpass this record. In fact, he’s on course to achieve a staggering 44 assists if he keeps up these performances. Now, of course, he isn’t expected to maintain these numbers throughout the season, but Henry’s record could well be under threat this season with 32 games remaining.

The Belgian’s astonishing tally of eight chances created on Saturday pushed him on to 27 chances created for the season – 12 more than his nearest competitor. Once again, to put this into perspective, he is on course to surpass his impressive tally of 105 created opportunities set in the 2017/18 season by January. Remarkable.

As if this wasn’t enough, Mesut Ozil’s monumental tally of 137 chances created from the 2015/16 season is now in De Bruyne’s sights. There is still a very long way to go but these records are becoming a distinct possibility.

After just six games played, it would be wrong to jump to conclusions, but after yet another astonishing display this season, Kevin De Bruyne has been one of the standout performers.

With yet more records in his sights, it would be no real surprise to see him eclipse them this term. And following a season of injury issues, we – as a football community – hope that those days are behind him, as he is simply phenomenal when playing at full fitness.