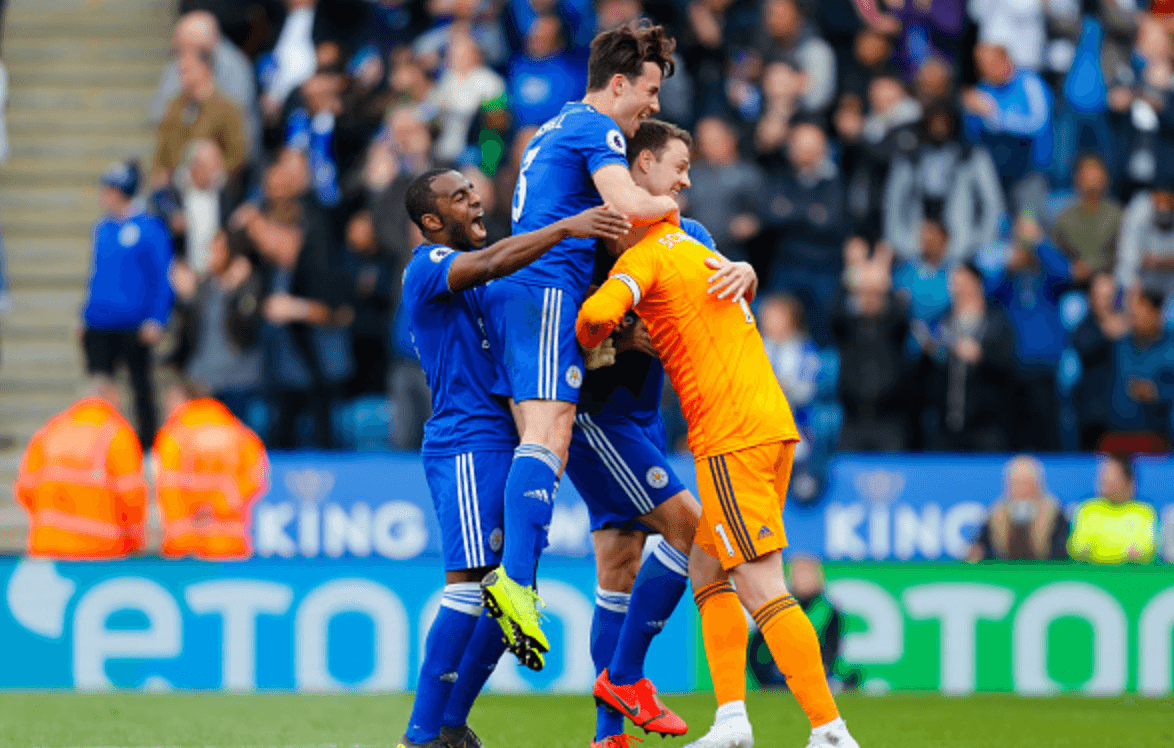 Arsenal slumped to another lamentable defeat against a vibrant Leicester side who recorded their most impressive win under Brendan Rodgers to date.

Unai Emery recalled Shkodran Mustafi, Pierre-Emerick Aubameyang and Sead Kolasinac in a bid to arrest an alarming slide out of the top four after defeat to Crystal Palace and Wolves in the past week. However, his team were stifled by Rodgers superb side. Leicester deployed Hamza Choudhary in a defensive midfield role, and the youngster dominated early on, not always within the laws of the game it has to be said, but the tone was set.

Goalkeeper Bertrand Leno was at his best, and in the first thirty-six minutes, the game was reminiscent of watching an underdog away in Europe as Arsenal struggled with the Foxes intensity. Leicester had completed 234 passes to Arsenal’s 57 before the match turned definitively in the host’s favour.

Ashley Maitland Niles had already been booked in the 8th minute for a shoulder barge that brought an abrupt end to a Leicester counter-attack before the youngster dived in, giving referee Michael Oliver no real option but to brandish a second yellow. While both cards were on the soft side, neither was incorrect, and it was hard to feel any genuine sympathy with Maitland Niles or Unai Emery as he threw into a fit of rage.

The red card merely made a Leicester goal even more probable, and on the hour mark, a floated ball by James Maddison was headed in powerfully by Youri Tielemans. Arsenal were clinging on and were grateful for another improved Leno display.

The ten men could only cling on for so long, and in the last five minutes, Jamie Vardy ended the contest. A long punt upfield was predictably missed by both Arsenal centre backs allowing Vardy in to lob over Leno and onto the crossbar, before Vardy nodded in the rebound. And in stoppage time James Maddison worked a ball to Ricardo Pereira who squared for Vardy to tap in and extend his record against Arsenal to eight in eight.

The defeat leaves top four qualification out of Arsenal’s hands, with the Gunners now two points behind Chelsea with two to play, meaning the Europa League semi-final against Valencia takes on added significance. Leicester are now three points behind Wolves in the battle for seventh and will go into games Manchester City and Chelsea with renewed confidence after Rodgers’ revival.

Tielemans: superstar in the making?

Both young midfielders Tielemans and Maddison were on sublime form today as the pair have been for much of their time at Leicester. Tielemans, 21, looks perfect for English football with a velvet first touch and lovely vision combined with a powerful running action and the intelligence to create space. His headed goal takes his tally to three goals and five assists in 11 Leicester games and if he is available after this loan deal expires Leicester would be mad not to buy him.

Entirely how the young Belgian has ended up outside the elite is a mystery, and indeed it does make you question the Premier League’s top six’s scouting. When was the last time they bought a young attacking player who wasn’t already a star? Manchester City could claim Gabriel Jesus, Manchester United, Anthony Martial – although the jury is still out. Otherwise, the top six seem only to buy established attacking players and are letting gems go unnoticed.

James Maddison going from Norwich to Leicester also looks a miss for the elite. The young Englishman was at his subtle best on Sunday with 27 out of 32 successful final third passes and a lovely assist for Tielemans header. Maddison has Beckhamesque crossing and a Teddy Sheringham-like ability to drift into space and play through balls and reverse passes. If Maddison can impose himself on games more and increase his goals tally, he can be a potential superstar.

Rodgers was criticised for the timing of his Celtic departure, but Rodgers is too talented to be marooned in Scotland. His arrival has sparked an attacking revival at Leicester after the often dour Claude Puel era. Leicester have averaged over two goals a game on the way to winning five in eight, and if you’d never watched the Premier League, you would be forgiven for assuming the hosts were the Champions League contenders. If Rodgers can keep up the revival after the summer break, Leicester could look forward to a top-six challenge and a cup run.

Another poor performance by Arsenal. From a position of strength a fortnight ago Emery and Arsenal have fallen apart since their Napoli victory.

The attitude of some of the Arsenal players has to be questioned. It’s scarcely worth going over the issues at centre-back again. But in midfield Granit Xhaka and Lucas Torreira have gone from having an unbelievable first half of the season to being so easy to play against currently. Indeed the biggest compliment that can be paid to Guendouzi is that Xhaka and Torreira miss the young Frenchman’s presence.

Henrick Mkhitaryan increasingly looks like a Mesut Ozil tribute act, at least Ozil plays the hits, Mkhitaryan seems to replicate Ozil’s worst parts – an Oasis tribute act without the 90s songs. Aubameyang and Lacazette were anonymous, and one wonders if Arsenal regret not signing the streetwise, Vardy and his ability to run defenders ragged even if the ball doesn’t come his way.

Emery’s tactics need a thorough review, the Arsenal team was set up so passively, and by half time Leicester goalkeeper Kasper Schmeichel had made more passes than any visiting player. The red card didn’t help, but Arsenal were on course to lose the game before then.

The strength at the bottom of La Liga is often underplayed but is Emery struggling against the bottom 14 of the Premier League because of the false security that his jobs at Sevilla and Paris St Germain offered. Emery will not be used to performances like the ones offered by Crystal Palace, Wolves and Leicester in the space of a week.

Emery deserves time after working through the muddle of the Wenger and Gazidis era and the Europa League run, but he needs to replicate his tactical acumen in the smaller games instead of saving it for top six clashes and Europe.

No sooner had Hamza Choudhary dominated the Arsenal midfield than tweets resurfaced from the Leicester midfielder’s Twitter account. They don’t need repeating here but needless to say, they were repulsive.

They were also written by a 16-year-old boy who presumably wouldn’t think the same things now.

In an ideal world, these tweets would be ignored and disregarded as the naivety of youth, but that’s not where we are.

Clubs still seem to be asleep on the matter of social media, and greater education is needed of youth team players, and maybe more robust monitoring is required.