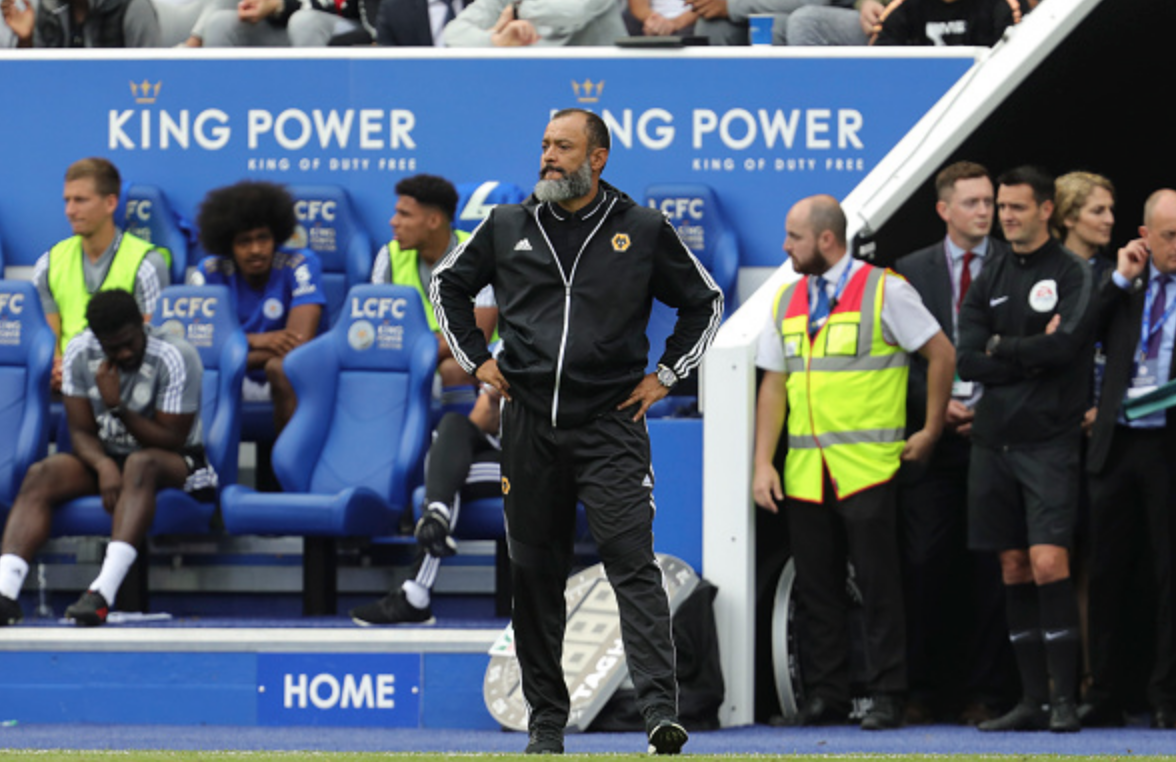 Leicester and Wolves took a share of a point as both sides struggled to overcome the other to get an early advantage for a top-half Premier League finish.

The first few minutes of the Premier League campaign for these sides started at a fast pace but this slowed as both sides continued to struggle to breakdown and outperform the other. There were few chances, but Vardy missed an opportunity before the end of the half followed by Jota comically tripping over his own feet to waste a chance of his own. There was very little to separate the two sides and neither registered a shot on target to call either goalkeeper into action.

Wolves came out the traps quicker in the second half with a tame Jimenez effort forcing Schmeichel to easily save. However, the was an early introduction for a new Premier League feature, VAR. Dendoncker managed to convert from six yards from a corner but the Belgian’s original header pinged off Boly’s arm before he slotted in the loose ball meaning the goal was correctly disallowed due to the new handball directive. This didn’t deter Wolves as they continued to create chances with Jota disappointing again.

Wolves introduced Patrick Cutrone in the game’s twilight for the less than impressive Jota but it was substitute Harvey Barnes who threw some life into the game when he registered Leicester’s first shot on target in the 83rd minute. Leicester began finishing the fame on the front foot and came close with Jonny Evans’ header being hacked away. Willy Boly stopped a last-minute winner for Leicester when he was able to hoof the ball away from directly under his own bar.

Not the fast-paced thriller which could have been expected from these teams playing styles, but this does give a good insight to how evenly matched these two teams are. Neither goalkeeper needed to pull off a spectacular save but neither strike force was supplied with quality to give them the advantage over the opposition defence.

Moving up a class

Both sides will be looking to move up from Middleweights to Heavyweights this season. Wolves’ promising first season back in the Premier League saw them finish seventh and they are likely to be Europa League participants after their 4-0 1st leg victory on Thursday. Leicester continue to rebuild after their fairy-tale title-winning season and were in contention until the end of last season for seventh. This opening game had the atmosphere of a derby due to the two clubs contesting for best of the rest spot last season.

While Wolves have stepped up to the European stage this season, Leicester have conducted impressive summer transfer business despite losing the now Manchester United defender, Harry Maguire. Wolves have made loanee’s Raul Jimenez and Leander Dendoncker permanent players at the club while bolstering the core of the team, most notably raiding Italian Serie A acquiring Patrick Cutrone, Pedro Neto and Bruno Jordao with the latter further strengthening the Portuguese presence at the club. These signings will help fight on both fronts and introduce some much-needed versatility.

Leicester were able to secure loanee Youri Tielemans for a £40.5 million fee as well as avoiding another deadline day drama by confirming the signing of Dennis Praet. A Premier League regular Ayoze Perez was pulled away from Newcastle and started the match, whilst youngster James Justin joined the club from Luton as a prospect for the future.

These transfer deals are the players which Leicester wanted and have been able to see them through, knowing that Tielemans and Perez can deliver in the Premier League. Both teams have set up this season to build and push into the top six.

The early raucous pace of the match epitomised the hunger of both sides looking to get an early advantage over the other in the season. The two sides were evenly matched, matching each other’s momentum, defensive strength and even squandering chances at similar times. Neither Vardy or Jimenez had any joy with chances being limited overall. A share of the points in an underwhelming game has given a good indication that these two will still be competing somewhere in the top half of the table come the end of the season.

Çaglar Söyüncü took the responsibility alongside Jonny Evans to fill the frame of where the former fan favourite, Harry Maguire, stood. Not easy shoes to fill as Maguire was able to contribute to build-up play and goals while providing the rigidity at the back which made him one of the icons for The Foxes.

The defence was set up similarly to how it was most of last year, minimising the risk of possible unwelcome surprises meaning no introduction for the young English full-back James Justin who signed from Luton. In the first half, the defence were not really opened up and never gave Wolves a real chance on goal. They maintained Leicester’s possession and slight governance over the first half. The second was similar despite Wolves coming out on the front foot and creating more chances.

There were a couple of times were Wolves’ pace through Jota exposed them and they were able to turn the Foxes defence. However, Maguire didn’t bring pace to the backline either. A clean sheet is what this defence needed after the attention which orbited around Maguire’s departure and the lack of a replacement being bought in.

Leicester’s defence wasn’t troubled too much but pace through the middle will be their biggest weakness. They may miss Maguire’s aerial presence and it was a set-piece which nearly broke through the Leicester backline if it wasn’t for VAR’s judgement. Physically they were apt and were not bullied by the Wolves attacking line. They limited the chances Jimenez and kept the Wolves frontman quiet all game. This ability to restrict opposition’s lone frontmen will be essential in their defensive success this season.

Both sides started players who had all played in the Premier League in the past with the only debut being for Leicester’s Ayoze Perez who joined from Newcastle. Wolves made two changes from their midweek Europa qualifier in Armenia bringing back Jonny and Neves. The starting line-up for Wolves was their most featured starting eleven last season and initially took no risks to begin their new Premier League campaign. Leicester also played it safe, choosing not to introduce any of the new summer signings from outside the Premier League from the first kick.

This highlighted the importance of this fixture despite it being their opening game of the season. Going by how close it was for seventh last season, this result could carry considerable significance come the end of the season.

VAR was the first Premier League debutant to feature in the game after Dendoncker’s goal was disallowed to prevent Wolves taking an early lead in the second half. The goal was scratched off because of Boly having had the ball rebound off of his arm just before the goal was scored. Under the new handball directive, any deflection off the arm, accidental or not, that leads to a chance or goal is an automatic offence. Therefore, VAR prevented an injustice to Leicester and kept the game level.

Patrick Cutrone was the first to feature of the new Premier League arrivals with only 15 minutes remaining. Unfortunately for Cutrone, the game was an evenly contested battle which looked to be heading for a stalemate before he got onto the pitch. Hardly the scenario you would want to be introduced into on your Premier League debut, but this was the reason he was introduced.

Leicester debutant and Premier League regular Ayoze Perez was substituted for Marc Albrighton shortly after. Perez failed to make a significant impact but was given a warm reception from the fans. He will surely bring more attacking prowess to Leicester throughout the season, but this was always going to be a difficult game to influence.

The managers choosing not to feature many of the new Premier League signings shows that they have added depth to their squads. The short time they have been with their new clubs would have meant they would have been taking significant risks in an important opening game against their league position rivals. Neither debutants made an impact on the game but neither did any of the other players on the pitch.

Diogo Jota inconsistency to cost him?

Diogo Jota finished last season on a high. Arguably, a hat-trick in the latter part of the season bolstered his stats to prevent him from numerous blushes. Jota did score nine and assisted five times in the 33 Premier League games last season which is good for a newly-promoted side. However, Wolves were a team who were performing well above expectations and were creating good and clear cut chances each game which were wasted by Jota and his attacking counterpart Jimenez.

However, Jimenez bettered him with 13 goals and seven assists. He has a higher goals-per-game ratio than Jota but missed two more big chances last season with 10 compared to Jota’s eight. Not taking big chances was an achilles heel of Wolves last season and looks to still be apart of Jota’s game.

Jota was replaced by former AC Milan striker Patrick Cutrone on the 75th minute. Granted Cutrone’s contribution was unnoticeable but given the chance in the future, new strikers Cutrone and Dadashov as well wingers Cavaleiro, Traore and new boy Neto will all be looking to take his place. There is now a lot of competition and option in the squad to take Jota’s place.

He will have to be more clinical to not frustrate his boss and be overlooked for the starting eleven. Today’s match will not reflect well on the Portuguese forward ability to take his chances.

Wolves will likely secure their Europa League spot on Thursday before hosting a successive match under the lights against Manchester United in the first Monday night fixture of the season. Leicester travel to London for the late Sunday fixture against Chelsea. Man United and Chelsea have yet to confirm their starts to the season being the final game of the weekend.