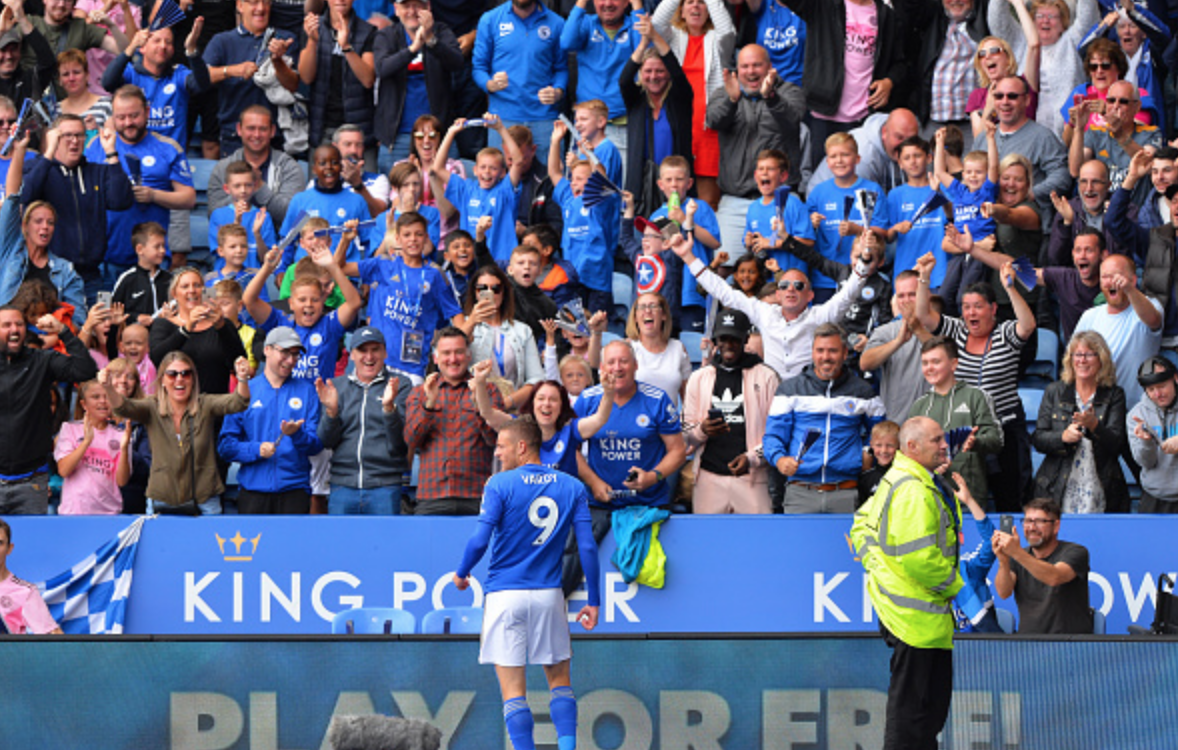 Leicester City continued their impressive start to the Premier League season with another win, overcoming Eddie Howe’s injury-hit Bournemouth side with a dominating performance at the King Power stadium.

The game started in scintillating style, with end to end football from kick-off, and before 15 minutes had even passed the ball had reached the back of the net twice. The first was Jamie Vardy being, well, Jamie Vardy. Ben Chilwell, playing again after two games out injured, delivered a long ball for the Leicester striker to run on to and, with Aaron Ramsdale off his line, Vardy produced an exquisite finish over 25 yards away from goal – lobbing the ball way over his head to put the Foxes up after only 12 minutes.

But the Cherries hit back straight away. Ryan Fraser, prowling towards the penalty area, played an excellently timed through ball to match Callum Wilson’s bursting run to put him one on one with Kasper Schmeichel, and Wilson did the business from there, rolling the ball into the back of the net to level the game up. But it was already clear that there were more goals to come.

After Wilson’s equaliser, Leicester took control of the game. It was slow at first, measured passing with an emphasis on possession, but then the chances began to come. Finding their way through the Cherries’ defence with smart interchanges, cross-field switches of play and fast through balls, the Foxes soon seemed to be on the brink of restoring their lead.

The long-awaited goal came through Leicester’s three key attacking threats – James Maddison playing a long ball for Vardy to run on to, who then beat Steve Cook at the edge of the box and played a delicious ball across the face of goal for Youri Tielemans to latch onto and place (by way of the post) beyond Aaron Ramsdale. The Foxes went into half time with their noses well in front.

And, to Eddie Howe’s frustration, nothing changed in the second half. The game never looked to be close to slipping out of Leicester’s hands, with Jonny Evans and Caglar Soyuncu extremely solid in defence, and at 71 minutes the trio struck again.

Maddison won the ball back inside the Cherries’ penalty area, knocking it towards Tielemans who easily played in Jamie Vardy for his second goal of the afternoon. Leicester did not stop producing after this, and Vardy may have had a hat-trick if teammate Demarai Gray had passed to him after a penetrating run, but there were no complaints from fans or players as Leicester saw out time to claim their second win from four games.

Vardy back to his best under Brendan’s reign.

Jamie Vardy’s two goals here brings him up to three in his last two. The signs point to a man fully back to his best, and in fantastic form too – and nobody needs to be reminded about an in-form Jamie Vardy (“it’s eleven, it’s heaven” comes readily to mind).

His stats under Rodgers tell an even scarier tale for teams who are about to face the prolific striker: since Brendan Rodgers took charge, Vardy has scored more Premier League goals (12) than any other player in the League – with two more than Sadio Mané and Raheem Sterling (10 each) and three more than Sergio Aguero (9). Little more needs to be said.

It was not all woe for Eddie Howe, who observed, at the very least, a good goal from Ryan Fraser and Callum Wilson. He will be happy, also, with the performance of his midfielders Jefferson Lerma and new signing Phillip Billing. Both players are strong, physical players and, were it not for their commanding presence in the middle of the park, Leicester may have ended up with four or five. They regularly cut out passes and outmuscled the rather lean midfielders of James Maddison and Youri Tielemans.

There is a new chant at the King Power stadium. Well, there are two actually. The first one tells former centre-back Harry Maguire, in much less polite terms, to ‘go away’. But the second sings great praise of his replacement, Caglar Soyuncu.

The young Turkish centre back has quickly become a fans’ favourite at the King Power stadium, who impresses with his strength, ability on the ball, and commitment. I have mentioned him in my last two reports, and not without cause either. Soyuncu put out another stellar performance against Bournemouth, winning all his duels, all his tackles, and making 68 passes. Soyuncu also has 4th total passes in the Premier League, equal on 294 with, guess who – Harry Maguire. It is safe to say the slab is not missed at Leicester.

VAR was once again the centre of some controversy at the King Power Stadium, following Leander Dendoncker’s disallowed goal in the first game of the season. This time it was a potential red card challenge from Youri Tielemans who, in an attempt to shield the ball from Callum Wilson, instead produced a hard stamp on his ankle. To many in the crowd, and to the referee, it did not even look a foul, but replays showed that it certainly was one. Tielemans might have been saved by the fact that he was not looking at Wilson when producing the stamp, although it would have been hard to argue with the decision were the red given.

This result brings Leicester up to third in the Premier League table, still unbeaten and now with two wins in their last two games.

The Leicester side of 15/16, Championship winners, had an eerily similar start – two wins, two draws, third after four games and with an identical goal difference of three as well. It is too early in the season, way too early, to draw any significant similarities – and Leicester are nowhere near Manchester City or Liverpool in terms of challenging for the title. But all signs seem to be good for their top 6 challenge, as Chelsea, Manchester United and Tottenham all fail to start in a convincing manner. At this point, only a fool would bet against the Foxes.

Leicester come up against recent leaver Harry Maguire after the international break, when they face Manchester United at Old Trafford on the 14th of September. Bournemouth go back home to Dean Court and face Everton on the next day, where they will look to add more to the four points they have amassed so far.