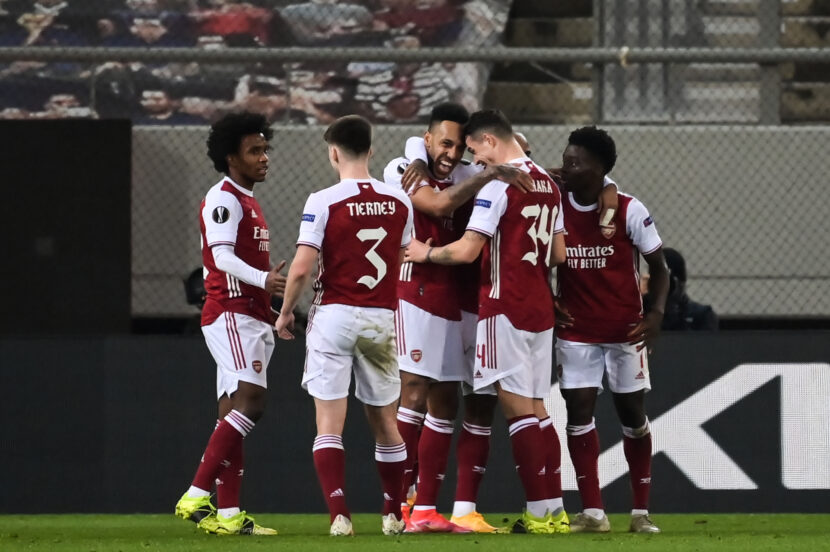 Leicester City must put themselves back together again after a lacking performance and deserved defeat in the Europa League to Slavia Prague in the run-up to their Sunday lunchtime fixture against Arsenal. The Gunners, on the other hand, will go to the King Power Stadium with heaps of confidence after they produced an inspiring 25-minute display to save their season against Benfica on Thursday evening.

Although their league position is much weaker than the Foxes’, Arsenal can go into the fixture with belief that they can win it, especially since their earlier loss to Leicester came off the back of a late piece of counterattacking brilliance from Brendan Rodgers’ side.  With the pressure on Leicester to maintain their good league form after a disappointing display, and confidence running high in the Arsenal camp, the stakes are the highest they could be.

Don’t let Leicester’s good league form convince you otherwise – Jamie Vardy is not at his best right now. While it is necessary to front this conversation with the statement that not all strikers can be at the top of their game all the time, it is, unfortunately, true that Leicester’s fox-in-the-box is in one of his poorer runs of form. This was evident in last week’s game against Villa – which was won only on the back of individual quality from Maddison and Barnes – but more clearly in their Europa League tie versus Slavia Prague.

Vardy seemed sluggish against the Czech side, constantly being outfought in battles and outran for the ball. He provided little outlet or quality for Leicester, perhaps showing signs of ageing he has managed to somehow stave off until this point. Vardy alone cannot be blamed for their poor performance, reminiscent of a Sunday league side playing together for the first time, but when Leicester have been poor in the past Vardy has been the bright spark that manages to guide them forwards. They received no such guidance on Thursday.

Brendan Rodgers will need solutions for the Vardy problem, and the many others that cropped up if they are to return to their league form when they play Arsenal. One hole they desperately need to fill is James Maddison’s. The English playmaker was out with an elusive hip injury on Thursday and is unlikely to feature on Sunday either as Rodgers strives to protect one of his star men. Rodgers tried a number of options for the “10” role against Prague, including Youri Tielemans and Cengiz Under, but none of these methods worked.

What Rodgers may do, to remove the need for a “10” playmaker and cover some of their defensive frailties, is move back to using three centre backs in a 3-4-3. This formation was utilised earlier in the season, and it allows the fullbacks and midfield pivot of Ndidi and Tielemans to push higher and act more creatively. It was also used to great effect in the win against Arsenal, which may leave Rodgers seeing it as a tried-and-tested method – one that could deliver the result they are in desperate need of.

Arsenal’s win against Benfica has been widely described as one that saves their season, allowing them to progress into the Europa League round-of-sixteen and regain some momentum after a demoralising loss by Manchester City.

The win was the result of three vital performances on Arsenal’s side, mostly from players who have been keeping Mikel Arteta’s side afloat all season. Bukayo Saka, Pierre-Emerick Aubameyang and Kieran Tierney were the three that really showed up on the night, and Saka was the best of these three, providing two sublime passes to create both of Aubameyang’s goals. Tierney, on the other hand, produced a piece of solo-magic to weave himself through the Benfica defence and slot coolly home to give Arsenal hope after Benfica’s second away goal.

While Aubameyang has only recently come back into form, Saka and Tierney are two players who have been consistently impressing in an Arsenal side who have struggled to make an impact in the league. But it is Aubameyang’s return to form is the one thing that has really started to show things pick up for Arsenal – and he is finally justifying the bumper contract they handed out to him in the summer. Aubameyang has scored six of his eight total league goals in since mid-December, with five of those scored since the end of January in just two performances (vs Newcastle and Leeds).

With two more for his season tally in Benfica, and confidence high, Arteta will be targeting Leicester’s frail defence as an opportunity for Aubameyang to boost his numbers up even higher. Watch for Saka’s floated balls into the box on Sunday – and expect for Aubameyang to get on the end of them. If they play with the determination they showed on Wednesday, they might make things ugly at the King Power.

Leicester’s injury list is likely to be identical to the one they had in midweek, with James Maddison the feature as he will be protected from an aggravated hip injury. Ayoze Perez and Wesley Fofana are still out but expected to be back in training soon, while James Justin and Dennis Praet are out longer-term – although Rodgers revealed that the latter’s recovery is going well and he may return at the beginning of April.

Arsenal have no fresh injuries either, but Arteta has revealed that he is likely to rotate and change his side after fielding an extremely strong XI against Benfica in Greece. Rob Holding will be available after his return from an enforced concussion break, and Thomas Partey’s substitute appearance on Wednesday indicates he is likely to play.

The limp and incohesive nature of Leicester’s performance on Thursday was indicative of problems that might find themselves to be persistent. Arsenal, on the other hand, will have confidence behind them and will go to the King Power searching for a win – one I believe they will get.