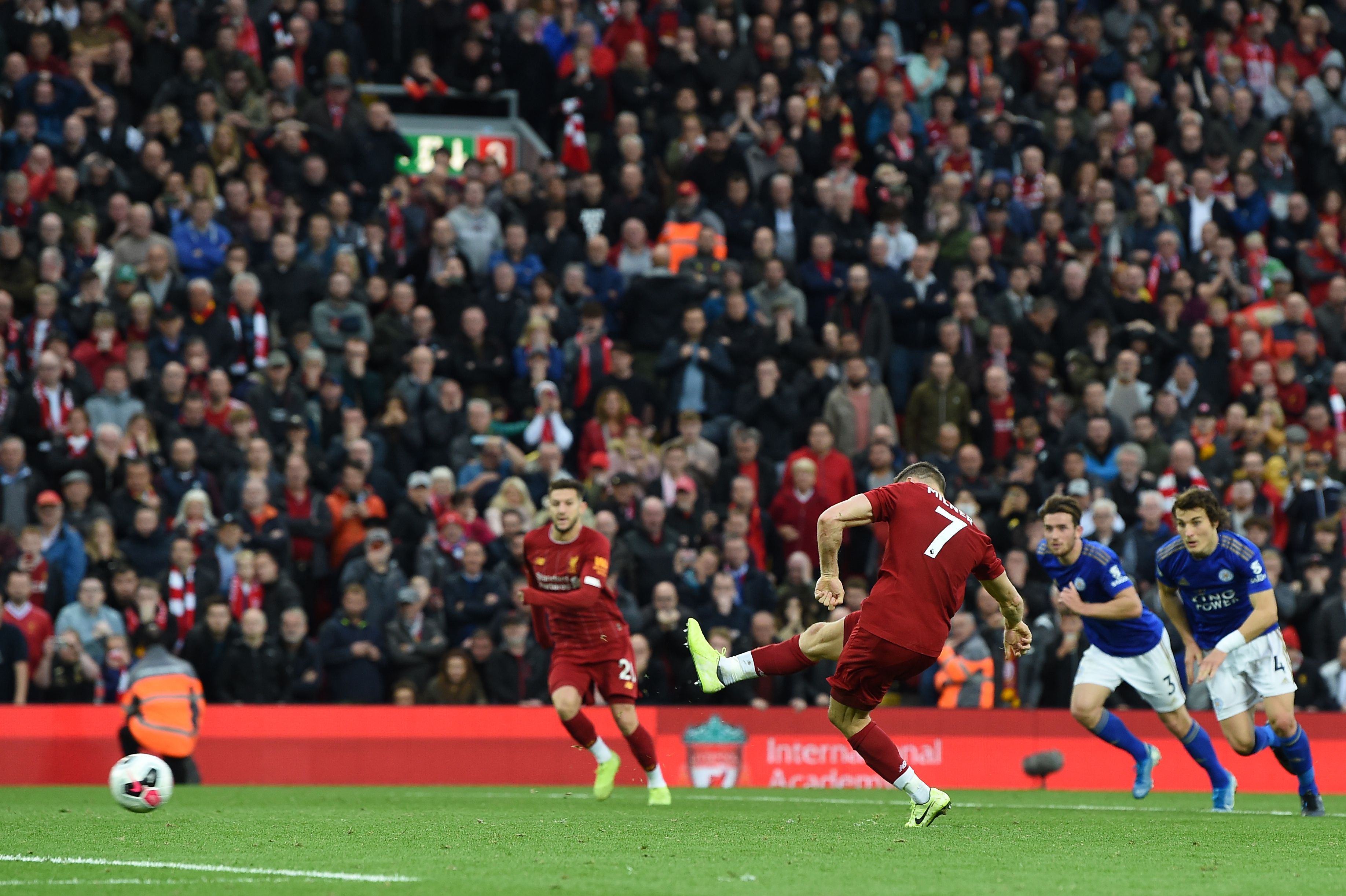 A 95th-minute penalty from James Milner saw Liverpool extend their 100% start to the Premier League season as they overcame stiff resistance from a determined Leicester City side.

It looked like the first half was going to end all square after an evenly contested opening. However, a moment of quality from James Milner saw his defence-splitting pass find Sadio Mane who outpaced Jonny Evans before slotting past Kasper Schmeichel in front of the Kop.

Liverpool had chances aplenty in the second half and should have put the game out of sight before the hour mark. A combination of fine defending and goalkeeping from the visitors and poor finishing from the Reds meant that Leicester were always in the game.

The hosts were made to pay in the 80th minute when Ayoze Perez found James Maddison inside the Liverpool penalty area. The Englishman buried the opportunity and it looked like Jurgen Klopp would be left to bemoan the missed chances by his players.

As the clock ticked into stoppage time, a Liverpool winner was looking less and less likely. However, out of nowhere, a breakdown in communication between Marc Albrighton and Schmeichel saw Mane nip in and nudge the ball out of reach and was clipped from behind by the Leicester midfielder. The penalty was confirmed after VAR consultation and Milner duly stepped up and did the rest. Nobody doubted that the veteran midfielder would find the back of the net.

The league leaders held on to continue their best start to a Premier League season. They have won their last 17 league matches and if they beat Manchester United next up, they will equal the all-time record for consecutive Premier League wins. Leicester put in a spirited performance but despite only losing to a last-minute controversial penalty, it is tough to argue that Liverpool didn’t merit their victory. The Foxes remain well in the hunt for the Champions League places and should take heart from their defensive and midfield performance.

Is it their year?

After continuing their perfect to the domestic campaign, there is a growing feeling amongst not just on Merseyside, but all over the country, that Liverpool could end their 30-year drought. Their habit of not being at their best but winning is unrivalled, and the manner of their last two victories against Leicester and Sheffield United is the mark of champions.

With Manchester City dropping points again, the Reds are now eight points clear. The league is never won in early October, and with 30 games to go it would be foolish to suggest that City’s race is run, but this is surely Liverpool’s best chance in the last 30 years to break their duck.

Not a happy return for Rodgers

Brendan Rodgers enjoyed an up and down spell as Liverpool manager between 2012 and 2015. Under his stewardship, the Reds played some sensational football and nearly won the coveted Premier League title in 2014, just falling short to Manchester City. After unprecedented success at Celtic, Rodgers has continued his rise in stock with an excellent start at the King Power Stadium.

Leicester still sit fourth in the Premier League table, despite having played three of last season’s top six already. With Manchester United and Spurs faltering, while remaining equal on points with Arsenal and Chelsea, Rodgers will not only have eyes for the top six but potentially the top four.

Sadio Mane has long been coveted as one of the league’s finest wingers, but could this be the season he lays the claim to be the best? Mo Salah and Raheem Sterling will have something to say about that, but the Senegalese sensation is consistently putting in excellent performances when the Reds need him most. Last season’s golden boot winner has picked up from where he left off and could well be a decent punt for this campaign’s award too.

Time for Maddison to make his mark

James Maddison is another who has enjoyed a fine start to the season and the Leicester number 10 will surely make his senior international bow this week. He was lively against a midfield three that started in Liverpool’s Champions League final victory last June and capped off his performance with a well-taken goal. With both Jesse Lingard and Dele Alli left out of Gareth Southgate’s squad, expect to see Maddison get some minutes under his belt against the Czech Republic and Bulgaria.

When Albrighton felled Mane in the closing moments of the game, Anfield erupted as Chris Kavanagh pointed to the spot. Based on the “clear and obvious error” rhetoric, there was no chance that VAR was going to overturn Kavanagh’s decision. It proves the point that football is so great because it divides opinion and stirs debate. There are few black and white penalty decisions. It will certainly take a lot of getting used to, but ultimately, the correct decision was made in this case.

Liverpool head to Old Trafford to take on an out-of-sorts Manchester United side as they looked to equal the Premier League consecutive win record after the international break. Leicester meanwhile will be looking to return to winning ways at the King Power stadium as they entertain Burnley in two weeks’ time.