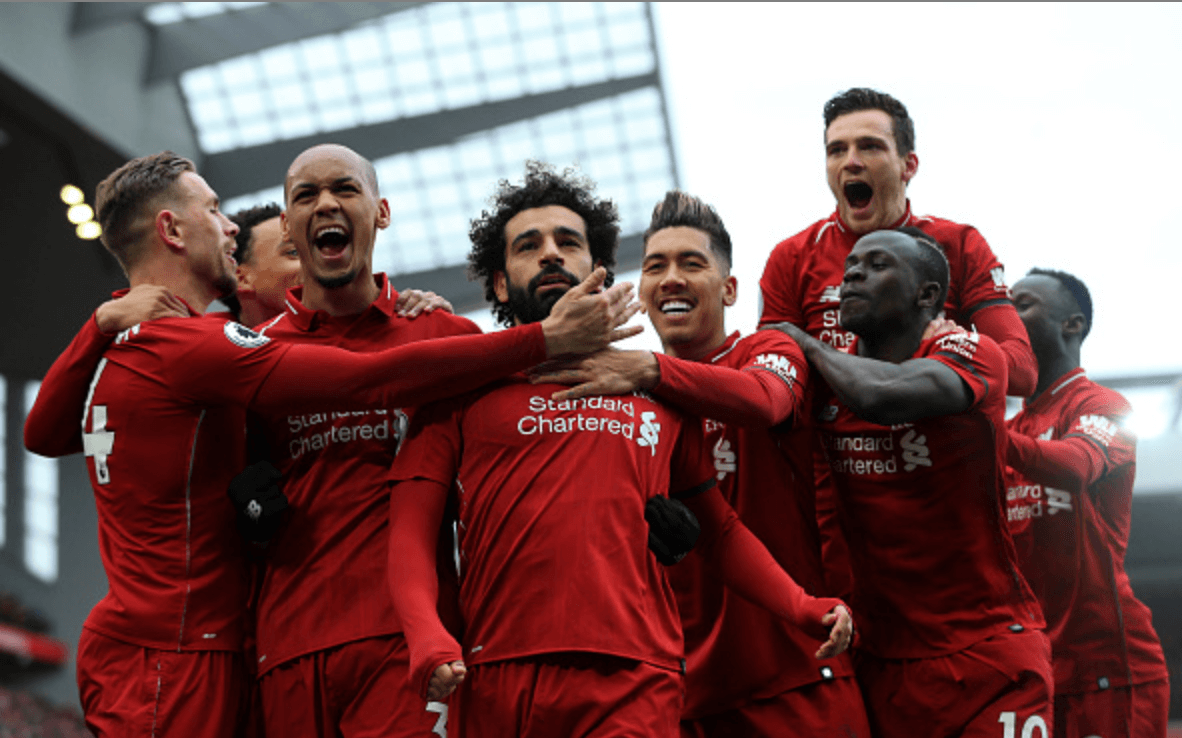 Two goals and a clean sheet for Liverpool saw Jurgen Klopp’s side take top spot once again after a battling performance against Chelsea at Anfield and a stunning, long-range strike from Mohamed Salah.

The 2-0 win over Chelsea marks the 38th league game for Liverpool without defeat in front of their own crowd, winning 28 and drawing 10.

The Reds have come such a long way under Jurgen Klopp, having not lost at home now for 38 games in the league, spanning across two seasons of fixtures. To think in the 2012/13 season Liverpool only managed six wins on home soil shows just how far they have come in over five or so years.

Another home game another victory, as Klopp marked his 200th game at the helm with a big win. As far as the first 200 games go for a manager, Klopp has managed to win 56% of games with Liverpool, a record only beaten by four other Liverpool managers.

36 losses for the Liverpool manager across the same period, a low 18% is something only beaten by two previous managers too; Benitez and Dalglish won more games, 115 and 118 respectively, than Klopp (112).

A 51st-minute goal to break the deadlock also broke Mane’s previous record of 20 goals in a single season. The Liverpool forward made no mistake, finding himself unmarked at the back post whilst captain Henderson picked him out, to head home and head his side into the lead.

Salah mentioned after the match how he has been pinpointed this season as a threat, which has left Mane and Firmino more space than normal, to devastating effect. The Egyptian is most likely right but he has still found his way to 19 league goals himself this season as well as seven assists.

It was Salah who then doubled the lead with a devastating effort from outside of the box. Kepa was helpless, as the ball swayed and dipped past his flailing arms into the far corner of the net. With only a two minute gap between both goals, Chelsea were left devastated but it was Hazard, the Chelsea talisman, who had two golden opportunities to drag his side back into the game.

The first was saved by the post and the second by Alisson from close range. Other than those two chances, Chelsea didn’t make the most of their possession and often wasted it when in good positions.

Chelsea currently sit in fourth spot, on 66 points and a 21+ goal difference. Arsenal have a game in hand, and with a win against Watford on Monday night will take them level on points, with at least a 26+ goal difference. This would put Chelsea into fifth. With four games to go, Chelsea have it all to do as Spurs, Man Utd and Arsenal will all still have an extra game in hand.

This quite simply means Chelsea are going to need a few favours from the lesser sides in the league in order to have any chance of a top-four spot. Spurs and Man Utd still are yet to play title-chasing Manchester City for a second time which could put Chelsea in the driving seat.

Chelsea’s concern though will be sitting on a top-four finish, without Champions League football next season if an English team such as Spurs or United prevail in the Champions League, and it could very well mean Eden Hazard’s future is elsewhere.

With rumours Real Madrid are on the hunt for the Belgian, the world-class talent that is Hazard could be on his way to La Liga as soon as the season closes. A deal would mean a hefty fee though, with Liverpool’s Coutinho leaving the Premier League for a reported £120,000,000; arguably Hazard should surpass that fee and then some.

Between Liverpool and Manchester City, Liverpool by far have the easier run-in, having already played all of the bigger sides now and successfully, too. With away fixtures to Cardiff and Newcastle, and home fixtures to Huddersfield and Wolves, these four fixtures put them up against bottom six sides and Wolves on the final day of the season, who are flying high.

Manchester City, on the other hand, have Tottenham, Manchester United, Burnley, Leicester and Brighton. There is no doubt this run of fixtures is tougher all round; however, if they can pick up all six points against Spurs and Manchester United, they may deserve to win the Premier League, even if it is just by a whisker.

Liverpool’s Jordan Henderson had another great game further up the field, but was forced off with what looked like a nasty ankle injury around the 77th minute.

Having assisted the opening goal and being instrumental in the middle of the park, it was another strong performance from the Liverpool captain. Klopp played down the injury post-match but it didn’t look good at the time. We will have to see the outcome as Liverpool prepare for a trip to Porto midweek.

Antonio Rudiger was forced off inside the first half for Chelsea as the defender failed to shrug off a clash earlier on in the match. It seemed to be the player’s knee which was affecting him.

Sarri didn’t say too much on the injury, stating Rudiger’s knee will need to be checked tomorrow and be hoped it wouldn’t be too serious. The German has been ever-present this season under Sarri and rarely loses his place in the side so this loss will be felt if the injury does keep him out long term.