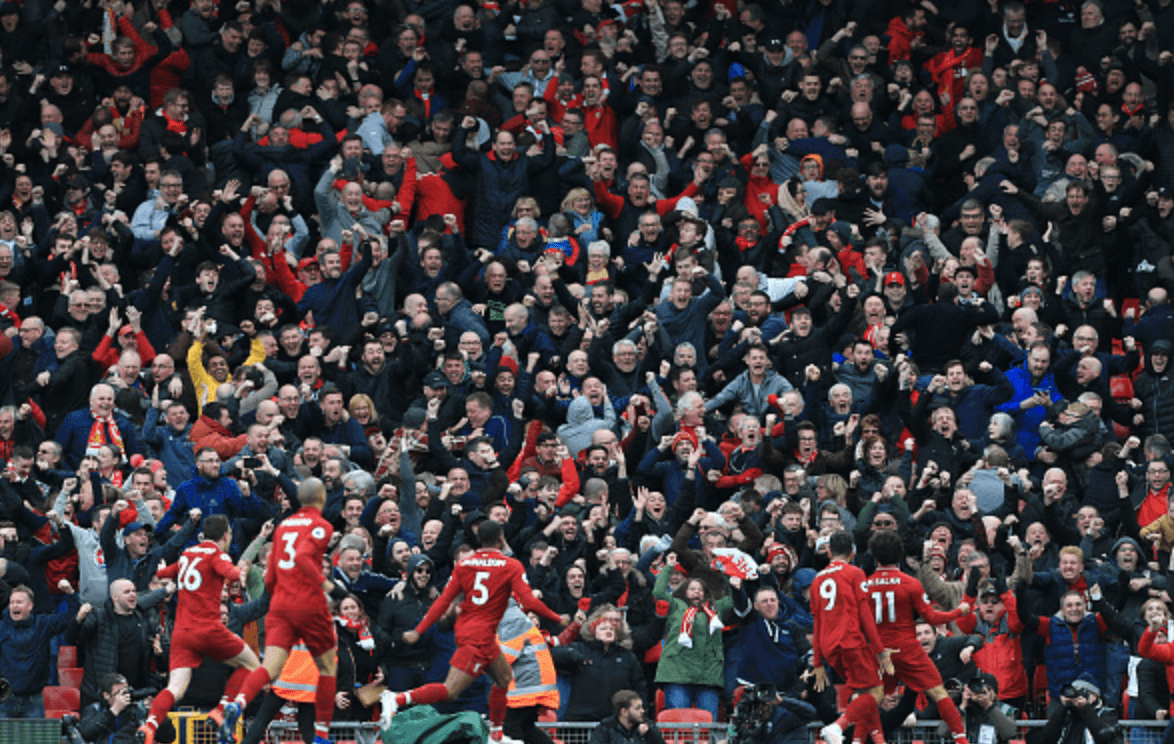 Liverpool reclaimed top spot on Sunday afternoon and are doing everything in their power to stay there, the key words there being “in their power”.

Manchester City are still in full control of their destiny at this stage whilst Spurs are now in free fall and they need to pick up very quickly before they drop out of the top four. It was a 2-1 win for Liverpool at Anfield but a costly mistake at the death which gifted them all three points.

Reds continue the climb with another late goal

A late own goal in Liverpool’s favour secured all three points at Anfield as they extended their unbeaten run of 37 games at home. There is no question how big this game was for both sides but it was the home side who prevailed in a match of two halves as the Reds dominated Spurs during the first 45 but were given a taste of their own medicine during the second half.

Liverpool have now scored three winning goals in the 90th minute or later in the Premier League this season with late goals against Everton and Crystal Palace and Sunday’s against Tottenham all having a very similar feel. All three goals have been at Anfield, all three in front of the KOP end and all three were riddled with goalkeeping errors.

The Reds now sit two points clear of Manchester City with six matches to go, whilst Manchester City have seven and therefore a game in hand. It is still in City’s hands at the moment but they have a tough run of games to come. If they can get through them, they will be deserved champions but Liverpool will be left to rue missed chances throughout the season and it may be a record in itself, for the number of points accumulated without winning the league.

Expansive play but a costly error

Spurs turned up during the second half and arguably could have won the game if it wasn’t for some astute defending from Van Dijk at a time of need, where Sissoko broke away after some fantastic link-up play with substitute Son, only to blaze his effort over the bar. Fortunately for Liverpool, there wasn’t an ounce of conviction from Sissoko and Van Dijk did excellently to ensure Sissoko ran out of options before missing his chance.

Spurs are now without a Premier League win since 10th February and now see themselves fighting for a top-four spot. Arsenal overtook their North London rivals with a win on Sunday evening and only a point separates Spurs in fourth and Chelsea in sixth now.

It was the 90th minute and another visiting goalkeeper left with his name in flashing lights, for all the wrong reasons at Anfield.  Lloris completely fumbled what was most definitely a routine save and shortly after Alderweireld got the final touch to send it over the line and the home fans into raptures.

Are Spurs the key to the league title?

They are and they will be. With Liverpool now taking six points from a possible six from Spurs who are sitting in the top four, Manchester City still have a Premier League match to be played against the Lilywhites, as well as a further two matches in the Champions League.

Imagining a world where Spurs manage to topple the champions domestically as well as possible knocking them out of Europe, the Manchester club could crumble completely and their season could be over as far as the two biggest competitions are concerned. Spurs caused Liverpool a lot of problems over 90 minutes at Anfield, so there can be no doubts that they have the capabilities to cause damage across three games of football against the Citizens.

As far as fullbacks go, the Premier League is full of sides who utilise them for their attacking capabilities. Spurs have the likes of Ben Davies/Danny Rose and Kieran Trippier, Manchester City have Benjamin Mendy and Kyle Walker, Everton have Lucas Digne and Seamus Coleman but Liverpool have Trent Alexander-Arnold and Andy Robertson, who are ever apparent in most Liverpool attacking moves.

The pair again were involved in both Liverpool goals against Spurs, Firmino finished off an exquisite pinpoint cross from the Scot inside 16 minutes and the Englishman put the ball to the far post for Mo Salah, whose effort caused enough trouble for the Spurs’ defence for the ball to trickle over the line for the winner. The Liverpool left-back has nine Premier League assists this season, whilst the right-back has six. Both players have surpassed last season’s efforts, Robertson ended on five and Alexander-Arnold ended on one. This is surely down to Jurgen Klopp and Liverpool’s tactics this season but both players have flourished from these changes and both have been paramount to Liverpool’s success.

The next closest defender with as many assists as these two players is Jose Holebas (Watford – 6) and Hector Bellerin (Arsenal – 5).

Liverpool travel to St Mary’s as they take on Southampton on Friday night and Spurs have little rest as they take on Crystal Palace, as soon as Wednesday night, at their brand spanking new stadium. Can Liverpool continue their efforts and can Spurs complete a successful start at their new home? We will see very soon.