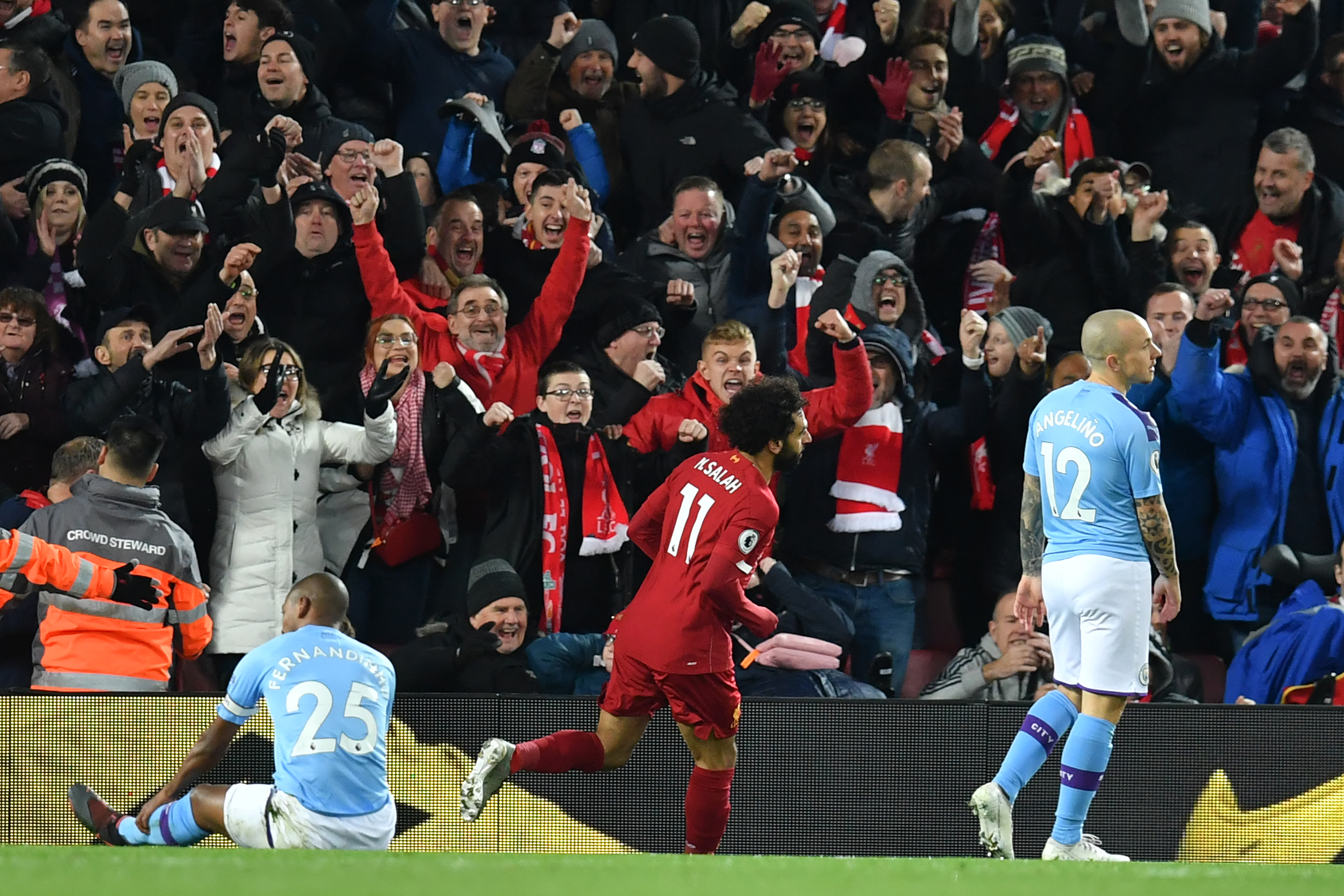 Runaway leaders Liverpool welcomed Manchester City to Anfield, a ground on which the visitors had emerged victorious just once since the 1980s.

Holding a six-point lead going into Sunday’s main event, the stage was set for either Guardiola’s champions to reinvigorate the title race once more, or for Klopp’s men to pull away from the rest of the pack. The clash between the champions of England and of Europe promised fireworks, despite half of City’s first team out injured.

The build-up to the game suggested Rodri’s involvement, and rumoured likewise, about the possibility of Ederson starting between the nets as well. While the former was confirmed by Sam Lee about 30 minutes before the team-sheets were announced, the latter proved only to be speculation.

City started the stronger of the teams, but when Bernardo Silva crossed the ball into the box at the 6th minute, Aguero stopped moving, expecting a penalty to be forthcoming for handball against Alexander-Arnold. The referee didn’t oblige, and Liverpool went the other way and scored a scorcher via their DM, Fabinho. City fans were left feeling hard done by, but VAR ‘checked’ the handball for about 10 seconds before deeming Fabinho’s goal valid.

For City, it was a case of déjà vu. Starting strongly, then being torn apart on the break. It was a few minutes later that Robertson played a sumptuous cross behind City’s defence to Salah, who expertly headed Liverpool into a 2-0 lead.

The replay at the time showed how close a potential offside call was, roughly 24 hours after Sheffield’s John Lundstram was deemed offside after a four-minute check that found his toenail was ahead of Eric Dier. However, VAR once more ‘checked’ for a few seconds with ruthless efficiency and found Salah to be onside, with the evidence for the same only being broadcasted midway through the second half by Sky.

City were reeling, but came up with a few good chances on their own, but it wasn’t to be their night. Sergio Aguero put a few good chances wide, and Raheem Sterling likewise was unable to find the back of the net from De Bruyne’s free-kick.

The teams went into the break at 2-0. In the second half, Micheal Oliver refused to award what seemed another very good penalty shout for City, after Mane shoved Sterling in the back after the latter had gotten the better of Alexander-Arnold.

The Senegalese would then go on to score a header from a remarkable Jordan Henderson cross to score the first Liverpool’s third. A late Bernardo Silva consolation goal was unable to rescue anything for City, with Guardiola’s sarcastic “I thank you very much” to referee Micheal Oliver at full time embodying every City fan’s feelings at the time.

Manchester City fans had already lost all hope with VAR, and last night’s display further outlines the imperfections of the system. Putting aside the controversy involved in the goals themselves, the system failed to communicate to fans in the stadium and fans watching on their television sets what, if anything was at all, was going on.

While we generally see long, dragged-out checks for offsides, handballs and penalty appeals (All of which display the VAR monitor on our TV screens, as we wait for the lines to be drawn and the different angles to be consulted), nothing of the sort occurred yesterday.

It may be down to the entire process being streamlined for efficiency, systematic checks happening in the background, or as only conspiracy theorists would put it, the FA doing everything in power to ensure Liverpool win, one thing is clear. VAR needs to be more transparent, and communication with the viewers has to be improved exponentially in order for VAR to solve the problem that it was brought in to correct.

The refereeing decisions did not help Manchester City in the slightest, but a team of their calibre shouldn’t have to rely on decisions going their way to emerge victorious. While Liverpool had 2 promising first half attacks and scored from them both, City’s attackers were unable to direct their shots on target for much of the 45.

Sergio Aguero’s nightmare at Anfield extended to 13 hours without scoring, but it wasn’t for a lack of chances. Aguero was simply unable to find the efficacy that he has exhibited thus far in the season, despite being put into excellent positions by De Bruyne.

Likewise, Raheem Sterling got past TAA all night long, and should have had a penalty when Mane blatantly pushed him the back, but his dribbling was to no avail. Dejan Lovren made it his life’s mission to block all of Sterling’s shots and accomplished that mission credibly.

Bernardo Silva, playing out of his best position, was actually the pick of City’s attackers and scored a well-deserved goal. However, the stark contrast against City’s front 3 who failed to convert chance after chance, and that of Liverpool’s, who looked very threatening every time they marauded forward, was the difference between the sides.

Perhaps Leroy Sane’s return – if he does indeed choose to stay at City – and Riyad Mahrez’s recovery from a suspected toe injury will boost Guardiola’s attack in games to come.

It doesn’t reflect too nicely on Manchester City when a 34-year-old DM is their best centre half in the absence of Aymeric Laporte. Granted, they have been hard done by injuries ever since their head physio was poached by Liverpool, but to look as shaky as they did last night after the extensive recruitment in the area was inexplicable. To exacerbate the entire issue, Benjamin Mendy – the club’s first-choice left-back, was left out of the entire matchday squad on a game with stakes as high as they were.

When questioned about a possible injury, Guardiola replied that it was actually a tactical switch. Where does that leave the French left-back? Pessimists were quick to imagine the worst: A sale in January, but after being injured for the greatest part of 2 months, and being tactically left off even the substitute’s bench in City’s most important clash (till now, at least) of the season was definitely not on the cards.

If the budget allows, another centre half’s arrival – either in January or the summer – looks necessary for City to cope in the absence of Laporte and Kompany.

At the moment, it seems difficult to imagine who will stop this Liverpool side in their present form, and with literally everything going their way. Klopp has built a juggernaut of a team, and they do not seem to be showing signs of slowing down.

Although the month of December will pose entirely different problems to the German’s team in terms of fixture pile-up, fatigue and maintenance of quality, they would have learnt something from last season after letting a similar gap slip.

While Leicester City and Chelsea too, to be fair to them, are continuing to grind out results with immense quality and now consistency, I personally can see them falling at one hurdle or the next; the same doesn’t look likely for Liverpool. Although there is still a long, long way to go in the league, there does seem to be an air of finality.

An international break is upon us now, with Manchester City facing Chelsea at home once league football returns on November 23rd. Liverpool travel to Selhurst Park earlier that same day.