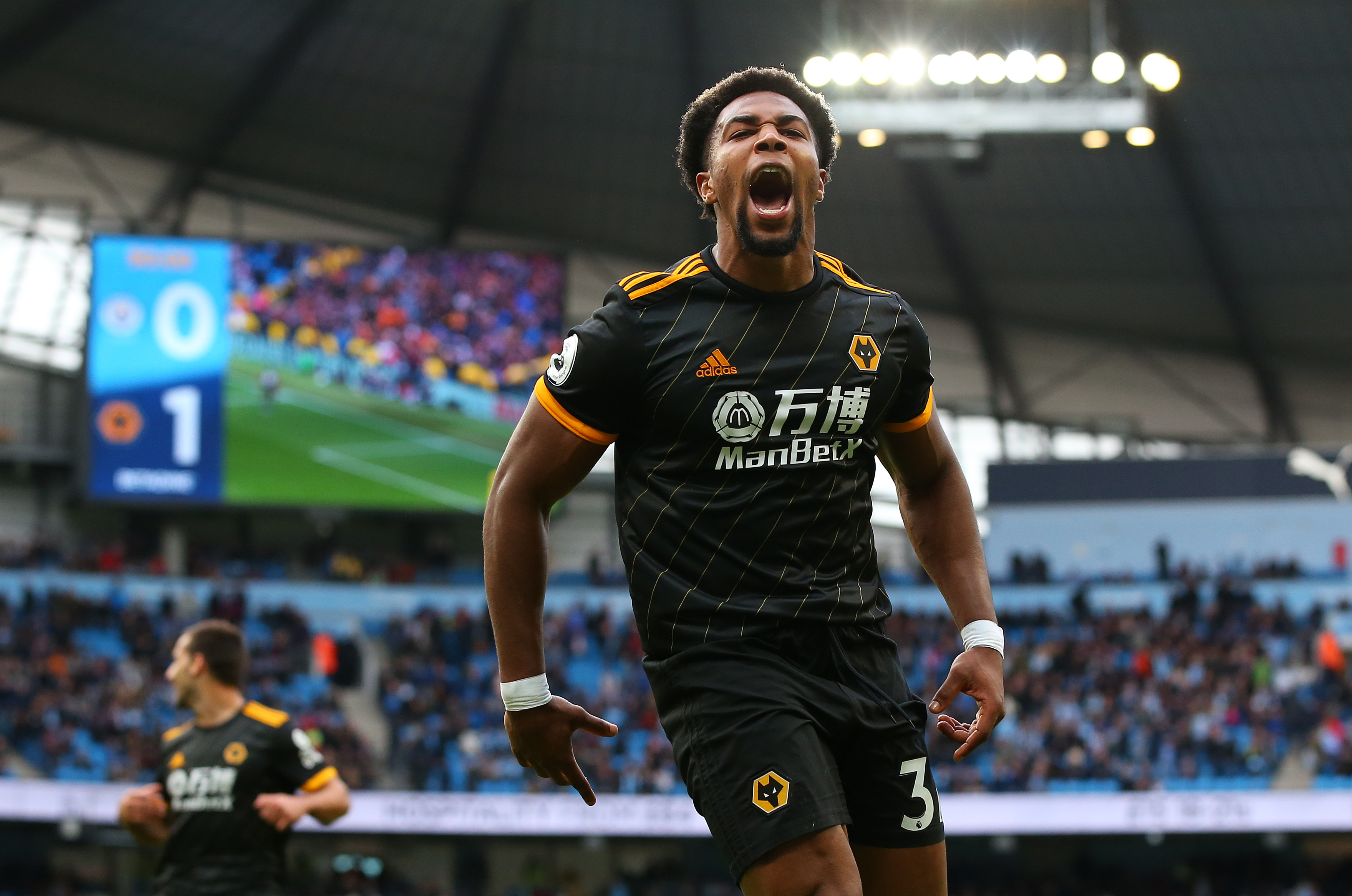 Adama Traore led Wolves to tear apart Manchester City with a 2-0 victory and pile the pressure on Pep by increasing the gap to Liverpool by eight points.

A lacklustre and frustrated City side tried to be the antagonists of their own downfall but Wolves’ fast-paced and skilful counter-attacks limited the embarrassment already inflicted by a defeat at home.

The Citizens started brightly but quickly gifted Wolves a few hopeful moments against their defence through poor passing and shaky defending. They were second-best in the first half and were unrecognisable compared to the City side who have dominated in recent years. In the second half, they began to show glimpses of their former selves but were seemingly getting frustrated, picking up yellow cards and venting their anger at the referee.

David Silva’s freekick was closest to putting City ahead after crashing into the bar. They continued to get hot under the collar it allowed Wolves back into the game and in a few brief moments, saw them go ahead. As expected City pressed but failed to breakdown the giant killers that Wolves have become.

Nuno’s side took an early blow when Saiss went off with an injury and was replaced by Bennett. Despite City’s dominance in possession, Wolves had the better chances in the first half. Otamendi granted Jimenez another chance through the heart of City’s defence but was denied by Ederson after claims that Fernandinho fouled the Mexican. In the second half, most of the football was played in the Wolves half but in front of their defence with a few half chances being created by the home team. Wolves stayed organised and solid which gave them a few minutes of sustained pressure.

They reaped their rewards on the counter-attack when Jimenez picked up the ball in his own half and charged at the last three City players. After skinning Otamendi, he slipped in Traore who calmly passed the ball past Ederson to put Wolves ahead. The West Midlands’ side defended valiantly as City piled on the pressure and countered strongly again in the same manner as the first with Jimenez setting the rapid Traore away into a one on one and finished with a goal in the same fashion as the first. A truly memorable performance for Nuno and his men which unexpectedly catapulted them into 11th with 10 points.

Wolves deservedly won this game after taking their few chances and prevented City from creating any clear-cut goal scoring opportunities. Wolves converted their two shots on goal while City managed only two underwhelming attempts on target out of their 18 shots. The contrast in objectives and starts to the season has been wiped away as Wolves are only six points behind second-place Manchester City who have created a seemingly monumental challenge to defend their title.

Both of these sides have demanding season objectives this campaign as both are still in all four competitions. While Manchester City’s aims will be to seriously challenge for all four trophies, Wolves’ priorities are the Premier League and the Europa League, while mirroring last season’s successful domestic cup runs which saw them reach the FA Cup semi-final.

City are already eight points behind the 100%-win rate Liverpool and have struggled without key players Laporte, Stones, Sane and De Bruyne – the latter whose influence has been exceptional in the 2019/20 campaign. Pep has always been prophesied to be the manager most likely to get City a treble and even challenge for the quadruple since his arrival. However, this has never really been a serious consideration as they would crash out of cup competitions at unexpected moments such as defeats to Wigan in the FA Cup and Spurs in the Champions League.

Prior to the season, pundits were raging that City were the best squad in the world. While they are still a force to be reckoned with, their injury problems seem to have caused them headaches despite their squad depth. If they really are going to mount a treble or quadruple challenge, they will have to utilise their squad and perform at least at their near best week in week out. Despite their gap behind Liverpool, it’s early enough in the season to not be concerned that City won’t be challenging for title come the final game of the season. After closing the gap of nine points on Liverpool last campaign, they should be confident they can do the same.

Wolves have a different concern for their quadruple challenge and that’s squad size. Nuno has risked a Carabao Cup run by fielding many youngsters and benchwarmers which has so far paid off. Their Europa campaign has already been long as they started back in early summer from the first qualifying round to make it all the way to group stages. Their Premier League campaign has started slower than expected, only grabbing their first league win last week against Watford. Last season, Wolves had the smallest squad in the league and brought in numerous summer signings to expand their size. They were lucky not to get any significant injuries last season and have had the same luck so far this season despite Jota and Jordao picking up injuries before fixture against City.

Wolves have seemingly prioritised the Premier League and Europa League but reaching the semi-final in the FA Cup last season will keep dreams alive that they could take a trophy home this season. As if they fall short in Europa League group stages and the Carabao Cup, they can channel their focus into the FA Cup and League once again.

Both of these teams have the ability to go the distance and achieve their differing goals as long as their squad rotations don’t risk sacrificing performances in the more important games.

Last season, Manchester City only conceded 23 goals and kept 20 clean sheets in the Premier League improving on the previous season of 27 goals conceded and 18 clean sheets. With eight games played, they’ve conceded nine and only kept three clean sheets. In recent weeks, City have looked more disjointed as they’ve allowed lesser teams to score against them and even conceded three in their loss away to Premier League new boys, Norwich.

Pep’s squad have not lost their attacking prowess having already scored 27 goals in the Premier League this season but defensive uncertainties seem to continually set back the team early on in this campaign. In this game against Wolves, they gifted Jimenez and Cutrone numerous chances through poor passing from Otamendi and some schoolboy defending.

While Fernandinho filled in as a makeshift centre-half against Wolves, this has not been an excuse in previous defensive calamities like the one where Otamendi was dispossessed to gift Norwich a goal. Even though City beat Everton with the same central defensive pairing, Everton failed to convert great chances against an in-form Ederson which prevented City’s blushes. Otamendi has been underwhelming this season and his place at City is likely to be at risk which was highlighted in his failed lunge in the build up to Wolves’ goal today.

As Otamendi is the only remaining fully fit centre half, it’s harsh to pinpoint the defensive weakness on him solely as Laporte has been present when conceding against Spurs and Bournemouth. The passing game in the defence has been poor this season and will need to improve if Pep’s philosophy is to remain strong throughout the team.

The full-backs have continued to contribute to the strong offensive performances but have left the two centre halves vulnerable. Without Laporte, it seems City are lacking the leadership that Kompany’s stature brought. Even so, it wouldn’t be a surprise if Pep went shopping in the January transfer window to rebuild his defensive stronghold after seeing how much of a difference Van Dijk made to Liverpool last season.

Wolves achieved a great last-minute win away at Besiktas in the Europa League on Thursday before coming to the Etihad to face the champions. Last weekend they dispatched a Watford side who were threatening on the day but have been in horrendous form since late last season. These two wins have revitalised a dejected Wolves side.

After their heroics last season, there has been tremendous anticipation and pressure on Nuno and his men to better those successes with the added difficulty that the Europa competition brings. However, their start to the Premier League has been concerning as they were winless and only obtained four points from seven games. Also, their opening Europa group stage home fixture ended in an agonising defeat against Braga.

Since their away draw to Crystal Palace at the end of September, Wolves have progressed to the final 16 of the Carabao Cup, won their first Premier League game and won their first Europa group stage. Granted coming to Manchester City is usually a write off before the season has begun but Wolves have stunned Pep and the world-beating champions in their own backyard.

City controlled possession as expected but the Wolves rearguard prevented any real threat on goal and their offence had the best chances of the game thanks to City’s poor passing at the back. Wolves’ reputation of challenging the top teams stood strong today and the startling victory is another good sign that Nuno and his team have found their spark again and will restore life back to their slow start to the season.

Guardiola has seemed unimpressed this season even when his side turn over teams by eight goals. He is clearly feeling his team are underperforming and lack the intimidation factor. Before today’s result, City would still be regarded as the strongest team in England but their first home defeat in 10 months has flipped this statement on its head. Pep’s dissatisfaction at his makeshift centre back pairing has proven right as their lack of pace and cohesion has cost City again.

Pep has also refused to pick Phil Foden and other academy stars due to the demand of City having to win prizes. As he faces criticism for the lack of opportunities handed to youngsters, questions could arise about the young talent which could be available at centre half considering the disaster with his current centre-halves of Otamendi and Fernandinho. However, John Stones is expected to return and despite the record of Stones and Otamendi not being prolific, this could relieve the pressure on the potential of pushing youngsters through.

It’s certain that his job is not at risk and won’t be unless City crumble in spectacular unforeseeable fashion. However, it’s likely Pep will come out with more disheartening statements regarding how strong his side is. While removing pressure from his players, he’s not maintaining the reputation which his squad have built through their dominating performances and collection of trophies. With players like Gundogan admitting that there is “quite a gap” between City and Liverpool, Pep will reinforce this to the press but should not let this feeling spread through his squad. He has quite a challenge ahead of him this season, one which was highly anticipated to be dominated by the Citizens.