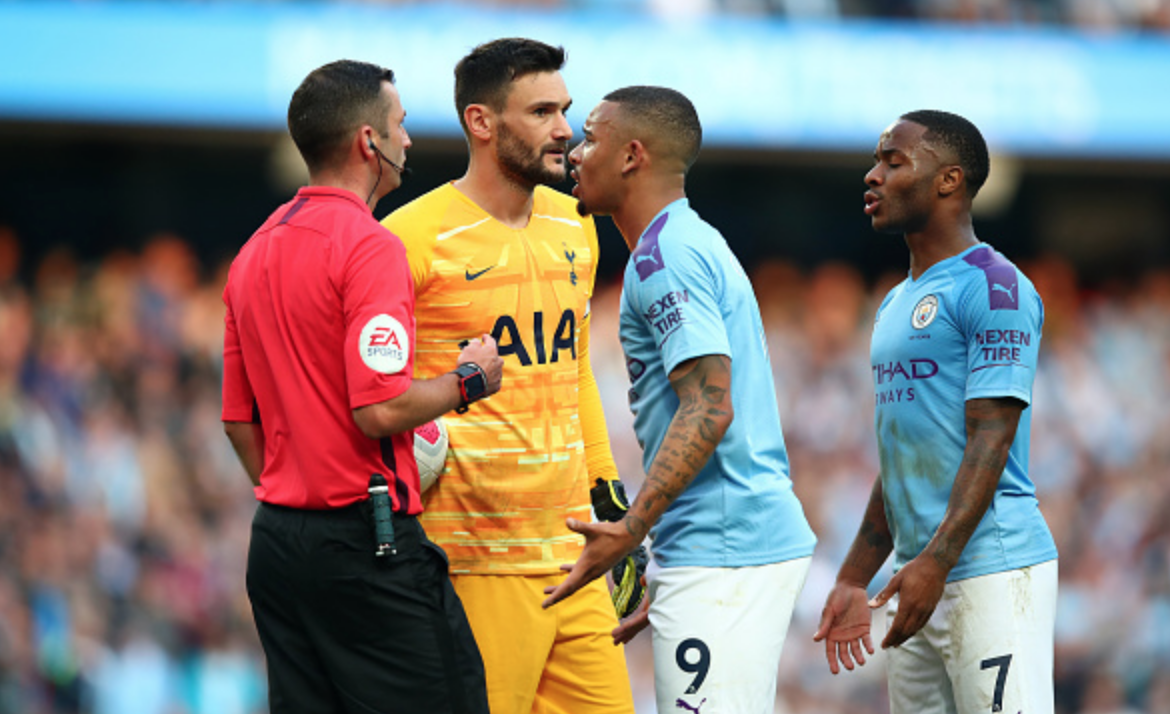 The defending champions suffered their first setback of the season against Tottenham Hotspur after VAR ruined yet another last-minute jubilation occasion when it ruled out Gabriel Jesus’s injury-time goal in a 2-2 draw at The Etihad.

City deservedly took the lead early on, after Raheem Sterling nodded in a sublime Kevin De Bruyne cross to put City ahead after a blistering start to the game.

Erik Lamela made the Citizens pay shortly thereafter, capitalising on the lack of closing down and Ederson’s poor positioning to restore parity.

De Bruyne took over the show once more, with yet another cross being slotted home first time by City’s mercurial Argentine, Sergio Aguero.

City continued to dominate but were wasteful in good positions. Lucas Moura then came on in the second half and made an instant impact, heading home from a corner mere seconds after being sent on.

Gabriel Jesus’s stoppage-time winner was ruled out by the VAR, sparking mass controversy and condemnation of the technology by Premier League pundits and fans alike.

De Bruyne back to his best

City’s Belgian wizard continued to impress, grabbing two beautiful assists in the game and creating several more chances that City’s players should have admittedly more clinical from. De Bruyne displayed all the qualities one desires in a modern midfielder: two footed-ness, vision with an ability to execute, ability to beat his man and work ethic. If he stays fit, opposition defenders will have to be at the very pinnacle of their abilities to stop him.

Tanguy N’Dombele was one of a few Spurs players who looked like a match for Bernardo Silva and co. His movement with the ball, and his releasing of the ball were both quality, especially on the turn of play. At only €60m he looks like an excellent – and much needed, after last season’s window – addition to Pochettino’s squad to take them to the next level.

Gabriel Jesus came off the bench against Spurs, having started last week against West Ham. The Brazilian looked a lot more active, and one could sense that there was the ‘eye of the tiger’ in his eyes, as he continuously got into excellent positions, although admittedly he was unable to finish a few chances. His goal (that was ultimately chalked off), showed superb technique, and his celebration afterwards was telling of how much it meant to him.

VAR once more defied Manchester City against Tottenham at the Etihad Stadium. While it admittedly displayed the usefulness of the technology, it laid even barer (As if the present scenario wasn’t bad enough) the looseness of football’s rules. Further, it also showed the danger of ‘selective – usage’, as many City fans pointed out, pointing to the instance where Rodri was effectively being grappled by his neck from the corner; an instance where VAR opted not to intervene.

However, most importantly, it completely wrecked every match-going fan’s experience – that of living in the moment. Imagine a world where spontaneous celebration and jubilation had to be suspended in favour of error-checking every goal; a world where match-winning goals will ultimately be reduced to the same enthusiasm levels as are winning corners. Having strongly advocated for VAR in the past, seeing its implementation has left me with a lot to desire once more.

Manchester City travel to Bournemouth next week, where they will take on Eddie Howe’s men in the repeat of what was a pivotal match for the blues last season. Tottenham welcome Newcastle United to London, a week before they engage neighbours Arsenal in a battle for the bragging rights of North London.