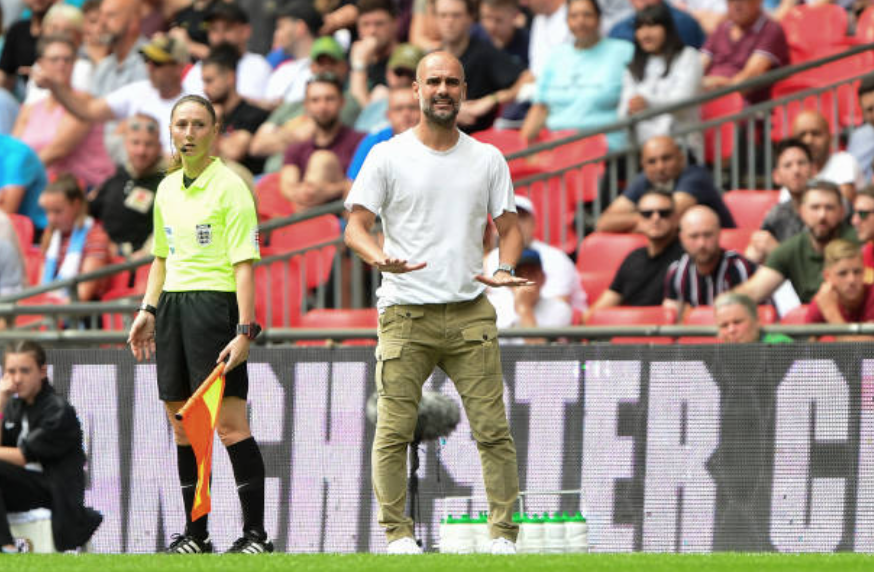 Manchester City ended the 2018/19 campaign by setting yet more records. The club won an unprecedented domestic treble, pipping Liverpool to the Premier League title in a truly gripping contest.

Pep Guardiola’s men were able to successfully defend their Premier League crown, thanks to a tireless work ethic and dedication – this is of course, without mentioning the phenomenal talent that resides within the team.

Perhaps the only minor downside to an otherwise flawless campaign was, the inability to claim the Champions League title and win the unthinkable – the quadruple.

City have had little reason to invest heavily this summer, making just three signings so far. Rodri is the big-name signing that got fans most excited, signing from Atletico Madrid in a £62.8m deal. Having just turned 23-years-old, the midfielder has a very bright future but more importantly, Guardiola seems to have found his long-term Fernandinho replacement.

The Spaniard has settled in very quickly to his new home in preseason, slotting straight into the base of midfield. He’s put in a string of assured and encouraging performances since his arrival, which has most certainly pleased his manager.

The Citizens also brought back Angelino from PSV in a £5.3m deal, in order to provide more cover in the left-back position. The club were running thin in that department, following the recurring injury issues for Benjamin Mendy. The departure of Fabian Delph to Everton hasn’t helped, meaning the purchase of Angelino was a necessary one. Just yesterday, City completed their third signing of the window as they splashed £60m on Juventus’ Joao Cancelo, with Danilo heading the other way.

City have had an impressive preseason, almost seemingly picking up where they left off last campaign. The only minor blemish for them in preseason was a draw to Wolverhampton Wanderers in the final of the Premier League Asia Trophy, which they eventually lost on penalties.

The Manchester side have put in a number of fine performances though, with the intensity perhaps the most exciting thing for City fans. In the last match before the Premier League season gets underway, the club drew 1-1 with Liverpool in the FA Community Shield, before eventually taking it on penalties.

The strengths? The constant drive for success. Guardiola has instilled a constant need for perfection from his players. Each and every player wants to win, they want to set records, and they have the mindset that will contribute to them setting yet more records.

The constant goal-threat from the whole City team is undoubtedly a major strength heading into the new season. To add to this, the signing of Rodri will only boost the club’s chances of even greater success – his forward-thinking and his ability to play an eye of a needle pass is something that will frighten opposition defences.

The worry for City fans is that the club are still yet to sign a replacement for the departed Vincent Kompany. The Belgium international was a key figure both on and off the pitch for the club. With John Stones, Aymeric Laporte and Nicolas Otamendi the only high-profile centre-backs, Guardiola will be slightly nervous heading into the upcoming campaign. Laporte is a certain starter, but is Stones really capable of filling the massive void left by Kompany? Probably not.

It seems clear that Guardiola has little trust in Kyle Walker, following a hatful of potentially costly errors in the previous season, which may explain the arrival of Cancelo. It is a very similar case to that of Stones, who has proven to be a liability on a few occasions despite his obvious qualities. In contrast, Laporte has yet to really put a foot wrong since his move to the club, making him the obvious first choice.

Guardiola has more than insinuated that he wants a new centre-back, having claimed that he wanted so sign Harry Maguire, but the club were priced out of a deal. With the transfer window closing today, time is running out for the club to land a new defender.

The forwards will be tasked with the responsibility of continuing and improving upon their outstanding performances, but it will be the midfield that will be key in the upcoming campaign. Rumors continue to persist regarding the departure of Leroy Sane to Bayern Munich, meaning the club would lose a highly impactful and influential player from their squad. The German is an outrageous talent – and it speaks volumes that he received criticism last season, despite scoring and assisting on ten occasions in the league.

Should he go, other players will need to step up and fill the void he will undoubtedly leave – with the club set to remain quiet for the rest of the transfer window. With the attackers already firing on all cylinders, the burden will lie with the midfield. Kevin De Bruyne, Ilkay Gundogan, David Silva, Rodri, Phil Foden and Bernardo Silva must dictate the game, supplying the chances for the forwards – but they must now also pose a greater goal-threat.

De Bruyne was of course out for the majority of the last campaign, but he will be hoping to rediscover the form he showed in the previous season. If the midfielders can stay fit, there is no reason as to why the club wouldn’t be able to put up a strong defence of their domestic success – and even go in search of adding the Champions League.

Liverpool will be hungrier than ever to dethrone Manchester City, having marginally missed out in a gripping tussle last season. However, Man City have shown on numerous occasions in the recent past that they are more than capable of withstanding any pressure.

Guardiola will have undoubtedly already warned his players about the difficulty of winning a Premier League title for a third consecutive season. But, this young squad has the necessary experience and desire to propel them to even greater success.

It remains to be seen whether City are able to conclude any further deals before the transfer deadline, with a Vincent Kompany replacement a potentially necessary acquisition. However, we have come to learn that Guardiola will make the best out of any situation he has (Delph at left-back, for example).

What we do know for certain is that the Sky Blues will be as driven as ever as they go in search of retaining the domestic treble – and perhaps adding the Champions League crown to it as well.