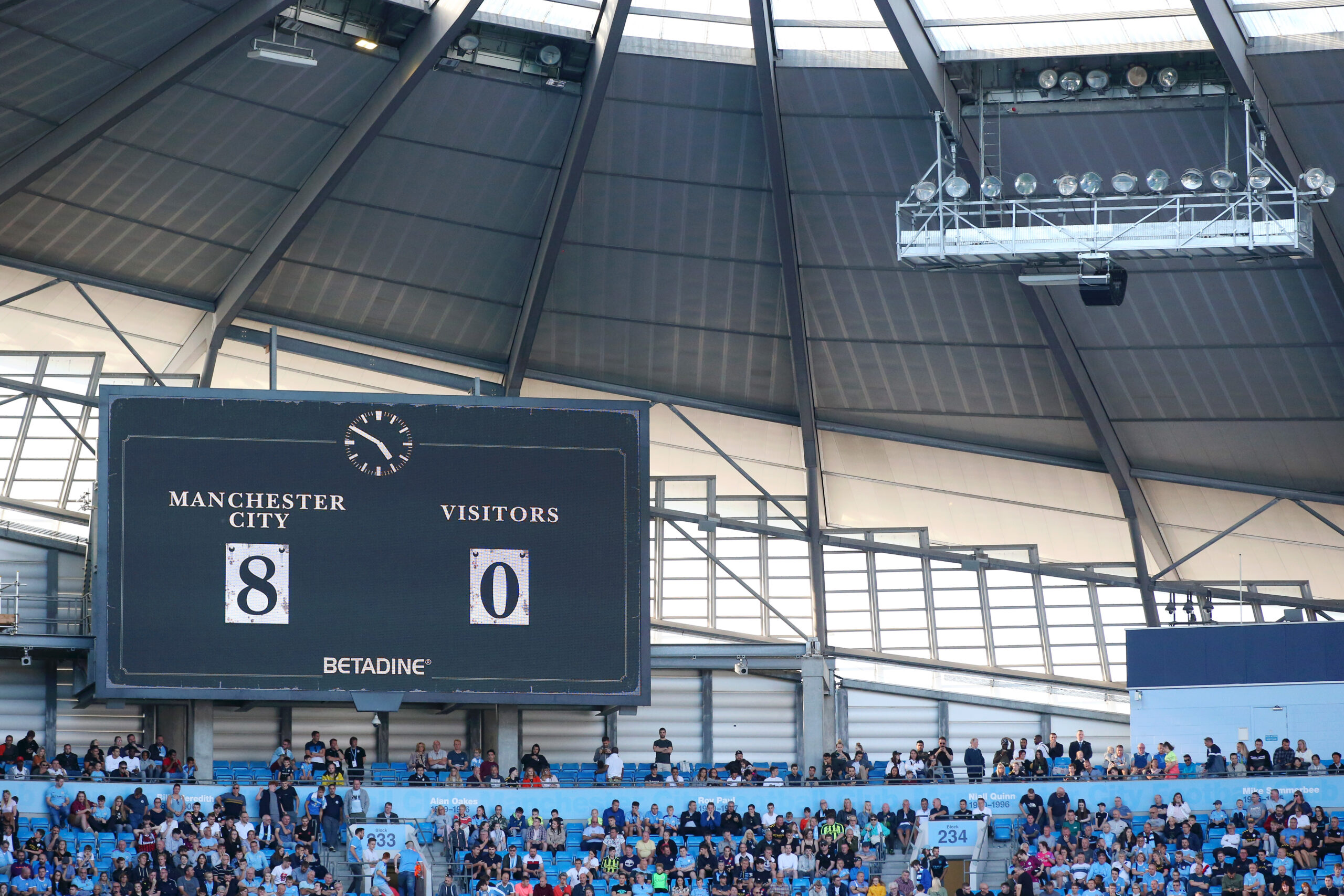 A struggling Watford were thumped within 15 minutes of kickoff as Manchester City took their game to a new level scoring four goals in the first 15 minutes and setting a new record – scoring five goals in just 18 minutes – as the Sky Blues go on to dominating performance winning 8-0.

Coming off a 3-2 loss the previous week at Carrow Road, Pep Guardiola had his squad primed and ready to deliver. City had scored 25 goals in their last six games against the Hornets, as Kevin De Bruyne got City start off right with pinpoint accuracy from the right flank which found the foot of David Silva just 54 seconds into the game.

Six minutes later, Sergio Aguero would convert from the penalty spot, after a poor decision by Ben Foster caught Riyad Mahrez on the leg near the end line. Being down 2-0, City were back for more as Mahrez and Bernardo Silva scored back to back goals just three minutes apart. After a quarter of an hour, it was City 4-0.

The Citizens weren’t done though, as they went on to demolish the previous record of the fastest team to score five goals, set back in 2003 by Arsenal, who scored five against Southampton in 26 minutes. Nicolas Otamendi would score the record setting goal, his first since the 2017/18 Premier League season. After the break, it was more City, as Bernardo Silva would complete his hat trick with goals in the 48th and 60th minute, while De Bruyne would put an exclamation mark on the day on the 85th minute to finish dismantling Watford.

Manager Quique Sanchez Flores had no answers after the game saying, “First we have to say sorry to the fans because they came to the stadium waiting for a good performance from the team and it was very difficult to be on the pitch today.” The Hornets have now conceded 18 goals in the first six weeks of the season and have only created four goals – both are worst in the Premier League. Their schedule doesn’t get much easier too as they travel to Molineux to have a date with Wolves.

The Hornets are tasked with an uphill slog the rest of the season, as they look to be in a relegation battle after just six weeks. There are issues with Sanchez Flores returning to Vicarage Road, as it appears to be “more of the same” when it comes to tactics that result in continued poor form.

On Saturday it was the decision to start defender, Dimitri Foulquier as the right midfielder, getting his Premier League debut, which lasted all of 33 minutes before being replaced by Roberto Pereyra. Will Hughes continues to be played out of position on the flanks, despite being best in a central role. Up top, a-lone forward formation, which hasn’t proven fruitful going back to Marco Silva. Lots of questions, but no answers.

His pinpoint accuracy and decision making on his first key pass of the game, less than 60 seconds into the gave proved that Kevin De Bruyne is the player for Pep Guardiola. Due to injury last season, the Belgian international was sidelined and limited in City’s championship season, but the club could have achieved much more, had he been available.

His command and presence on the pitch are second to none, as he picks out those perfect passes, creating as City goes forward. De Bruyne controls the game from the right flank, as he picked up two more assists on the season for a league-leading seven after the 8-0 win over Watford.

While Arsenal fans continually refer back to Troy Deeney and his “lack of cajones” comment back in 2017, this sort of brash confidence is what the Hornets are currently lacking on the pitch. The Watford captain has missed the last four games due to a knee injury sustained in the 1-0 loss at Everton in game week two. While Deeney’s play on the pitch is secondary, he’s been an important piece for the Hornets, as their inspiration leader on the pitch. Currently, there are no players with the “cajones” to step up and fill the role vacated by Deeney.

There is no reason to think otherwise, City will win the Premier League as Saturday’s thrashing of Watford is any indication to just how hungry Guardiola’s squad is. While there is some doubt about the health of their defense, this club is lethal going forward, as they have now scored 24 goals through six weeks of play.

Their depth is unrivaled with players like Riyad Mahrez, Gabriel Jesus, Ilkay Gundogan coming off the bench at times this season. Last season Man City won the domestic treble, capping an incredible season by defeating Watford in the FA Cup Final. This season could be a repeat of last season, with Guardiola keeping his eye on the Champions League trophy, which they missed out after a VAR decision cost them the in the quarter-finals. They continue to be the strongest team in the Premier League, even chasing Liverpool by five points.

Watford travel to the Molineux on Saturday to face 19th place Wolves, while Manchester City travel to Goodison Park and an out of form Everton.