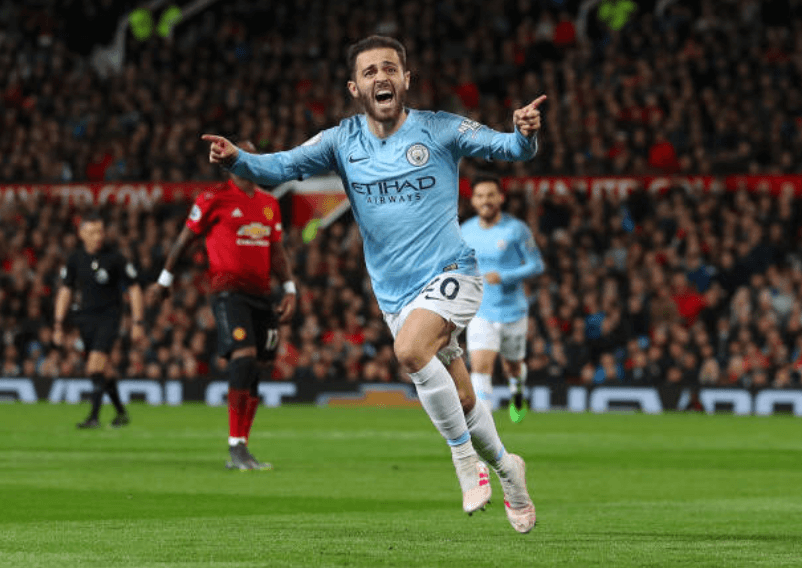 Manchester City gained the upper hand in the race for the Premier League title as they convincingly beat rivals Manchester United 2-0 at Old Trafford.

The opening passages were a feisty affair with tackles flying in from both sides and scintillating end-to-end football. United did well to stifle City in the opening half an hour whilst also giving their noisy neighbours a few scares as they were quick on the counter-attack. However, City looked lethal in possession and began to dominate and push United further and further into their own half as the first half came to its conclusion.

With the scores level at half time, Bernardo Silva was the man of the hour when he broke the deadlock in the 55th minute with a vital goal for the Citizens. The Portuguese attacker picked up the ball on the edge of United’s 18-yard box before cleverly cutting onto his left foot and rifling it past De Gea’s near post to send the Blue side of Manchester into raptures.

United responded well with some positive possession in midfield but substitute Leroy Sané doubled City’s lead in the 66th minute. Questions will be asked of De Gea after he was beaten at his near post once again after the German winger let loose from 16 yards out.

City ran out the game worthy winners in the end to add another twist to this season’s riveting race for the title. United will be wanting this season to be over as soon as possible after their recent collapse and Ole Gunnar Solskjaer has a massive job on his hands revamping his side this summer.

City have now taken a one-point lead over Liverpool in the race for the Premier League title. With just three games remaining and neither side having a particularly difficult run-in, it will be a battle of nerves to see who reigns the victor at the end of the season.

Guardiola and his team have experience on their side but anything can happen in what promises to be an exciting finish to the season.

Does anybody want to finish fourth?

The race for the top four seems to be another story altogether with the three main contenders, Chelsea, Arsenal and United, all dropping points in the latest round of fixtures.

The advantage lies with Chelsea who currently sit fourth just one point ahead of Arsenal and three points ahead of United. This Sunday’s game between United and Chelsea should prove decisive in this gripping race for the final Champion’s League qualification spot.

Has De Gea’s head been turned?

The Spaniard has been uncharacteristically flimsy between the posts for United in recent weeks with his weakness at his near post evident once again on Wednesday night. De Gea’s heroics have won his side innumerable points over the years but his performances in recent weeks have cost United crucial points in the race for top four.

With his contract talks still at an impasse and rumours of interest from PSG, De Gea certainly looks distracted and not fully focussed on the task at hand. Perhaps Solskjaer will take De Gea out of the limelight for the remainder of the season while other events distract him from his duties and, ultimately, cost the team vital points.

A fiery affair between City rivals

The opening stages of the game proved to be very entertaining with full-blooded challenges and three yellow cards in the first 25 minutes. Vincent Kompany was the first name in the referee’s book when he picked up a yellow card for a body check on Marcus Rashford in the 10th minute. Jesse Lingard could have potentially been given his marching orders just before half time after a bad challenge left Ilkay Gündoğan writhing in pain while David Silva certainly should have been sent off in the second half for an outrageous kick to the chest of Andreas Pereira.

From a neutral perspective, it was good to see that the passion of the Manchester derby has not waned despite the gulf in quality between the two sides.