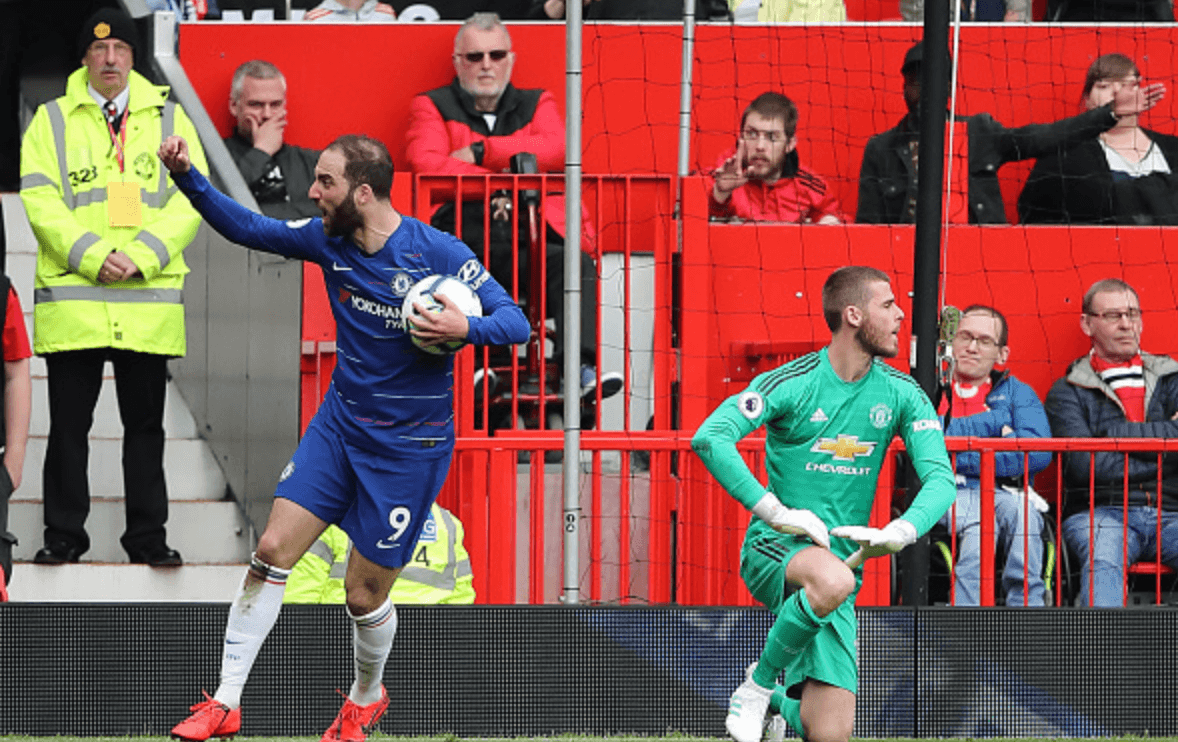 Juan Mata opened the scoring for the Reds after some delightful passing work down United’s left flank and a neat Luke Shaw cut back left the Spaniard with just the finish to do.

Chelsea equalised just before half time however after De Gea spilt Antonio Rudiger’s long-range shot and Marcos Alonso was quickest to react, pouncing to put Chelsea back in the game.

The second half was one of little opportunity apart from toward the final stages of the entire match.

Both sides came close in the dying minutes as Pedro cleared off his own line and De Gea half redeemed himself with a top save from Higuain.

In the end, the sides shared the points and the battle for the top four continues.

It was the prodigal son returning when Solksjaer took over United. The team were in a low place after three years of relentless Mourinho, which is enough to drive anyone into the ground.

He showed just how good a man manager he is and boosted his player’s confidence, but in the last five weeks, we have seen the frailties in the United squad come to the fore.

There is no shame in losing to Barcelona, but there is shame in losing 4-0 to Everton and gifting your top four rivals a goal to get them back in the game and the top four race. United are full of attacking superstars but what they really lack in some steel amongst the back line.

Matic is on the wrong side of 30, the centre backs are temperamental at best, and De Gea recently has been far from his normally superb form that has seen him dubbed the world’s best.

Some serious spending may be needed in the summer in order to bring United up to speed.

Is the criticism of Sarri even fair?

If you look at Chelsea’s season so far you may actually begin to question why the manager is getting as much grief as he is.

Fourth in the Premier League, in a European semi-final, and finishing runners up to Manchester City in the Carabao Cup. In a season where the top two in the league are just untouchable, this doesn’t seem too bad.

It seemed that a lot of people’s gripes with the Italian was centred around two issues. One was his reluctance to play Hudson-Odoi but eventually the manager was brought around to everyone else’s way of thinking.

The second was his reluctance to even consider a move from his 4-3-3 even when it wasn’t working. However, it worked for him in Italy and it’s taking Chelsea to on the brink of being back in the Champions League, so why should he change?

Some serious spending will be going on this summer

Player retention for both of these sides is going to be quite a challenge this summer. For United, De Gea, Pogba, Lukaku, and Sanchez have all been spoken about as leaving the club to either Spain or France for colossal sums of money.

If you’re a United fan you might see that as potentially damaging for the club but if you think about the sums of cash they’ll be getting in, it may well be a blessing in disguise. United know they need reinforcements in midfield and in defence and they will be able to have their pick of the world’s best with the transfer fees they’ll be receiving.

Chelsea face a similar issue but predominately around one player, maybe two. I personally will be incredibly surprised if Eden Hazard is lining up for Chelsea next season.

He has given Chelsea seven years of his life and has been fantastic but it could be argued that he has achieved everything he possibly could at Chelsea. They are not going to win the Champions League anytime soon and Hazard could take his pick of any club in the world where that is a real possibility.

Chelsea fans cannot be angry if the Belgian chooses to leave, it will be a sad day in West London but if he does go they should wave him off with a fond smile, whilst the rest of the Premier League rejoice that Chelsea’s main attacking outlet has now gone.

Man of the Match – Luke Shaw

In a game where choosing a MOTM was proving quite a challenge, I thought that the Englishman may as well take it. He played an integral part in United’s goal, what would have been the winner if not for De Gea, and he did well to keep both of Chelsea’s wingers quiet all night. It’s good to see Shaw’s career on an upwards trajectory after what has been a tough couple of years.