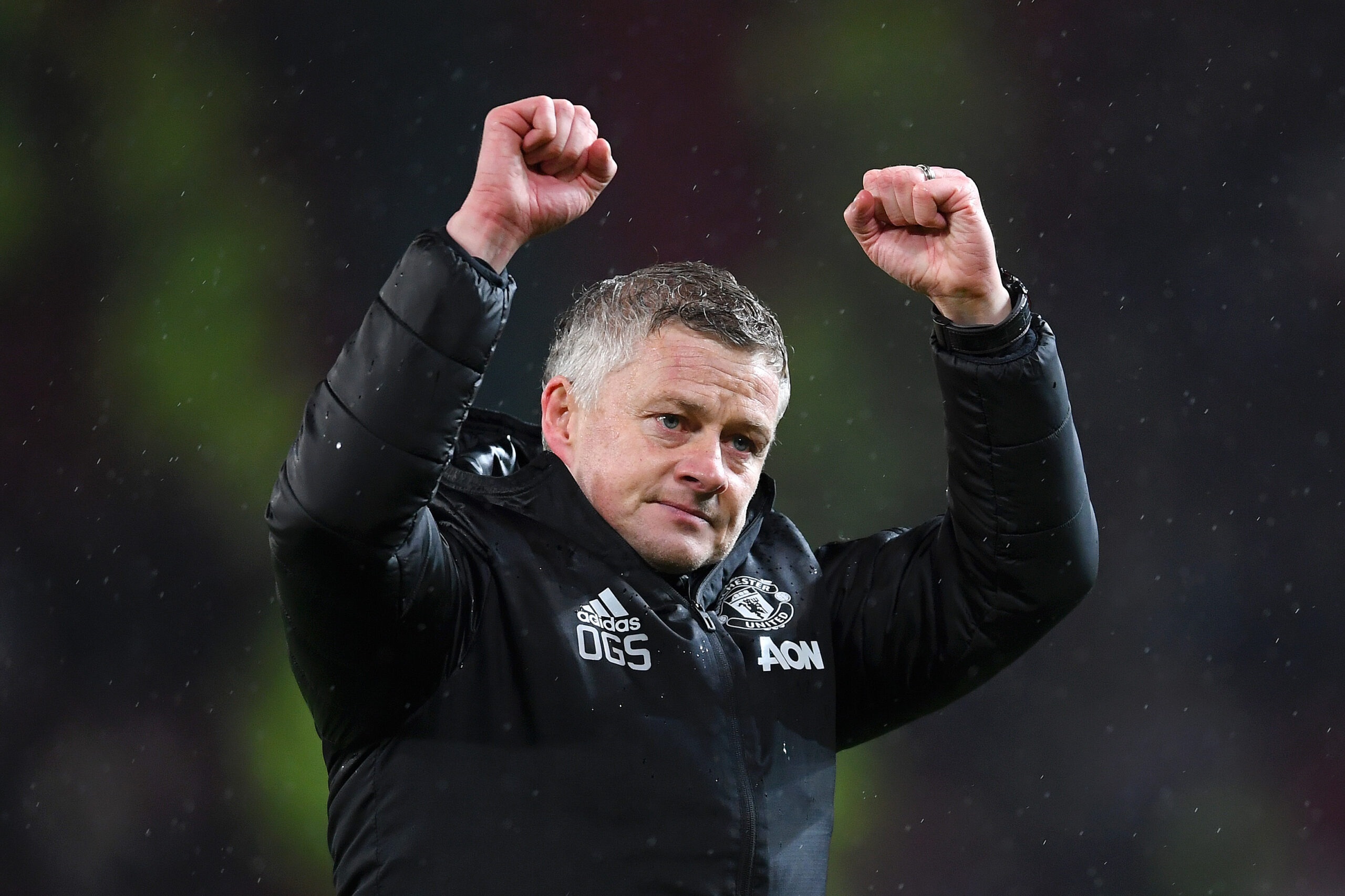 Manchester United strengthened their grip on the final Champions League place with a riotous win over Manchester City on derby day.

Old Trafford was in raptures as two Ederson blunders handed Ole Gunnar Solskjaer’s side a third win this season against the Citizens and a first league double over their city rivals in a decade.

Pep Guardiola was without Kevin de Bruyne but hit their trademark passing stride early on as the possession stats racked up in favour of the defending Champions. However, aside from a sidefooted effort by Raheem Sterling early on, Manchester City struggled to impose themselves on the home side. Perhaps emboldened by their opponent’s strange toothlessness, the home side slowly started to make their way into the game and should have gone ahead when Anthony Martial shrugged aside Fernandinho only to stroke a tame shot into Ederson’s grasp.

The match turned decisively on the half-hour mark though as Gundogan was harshly adjudged to have fouled Bruno Fernandes. With Manchester City fast asleep, Fernandes scooped a sublime ball over Aguero and Gundogan into the path of Martial; once again the French strikers shot was tame, as it rolled down down his shin, but the volley was on target only for Ederson to dive over the ball and let the ball squirm in under his arm.

The goal clearly shook City who should have conceded a penalty when Otamendi clattered into Fred’s shin. Bizarrely Mike Dean booked Fred for a dive whilst VAR was MIA. The second half saw the same pattern as the visitors dominated the ball to no avail. They looked to have equalised as Aguero lashed home after play had stopped after an astonishingly poor piece of assistant refereeing yet VAR suddenly sprung into life to adjudge Aguero’s shoulder a millimetre offside. If City were unlucky then they were lucky when Ederson’s calamitous afternoon continued after he let a backpass through his feet and onto the goal line as he just about cleared under close pressure from the increasingly superb Martial.

Guardiola finally lost patience with the tepid attacking play and brought Mahrez and Jesus on who livened up the City attack. Mahrez nearly teed up an open goal for Sterling but the English forward continued his goalless run against United before Jesus was then denied by De Gea.

With the game well into injury time, there was still time for one last Ederson blunder. A clever Ighalo backheel had led to a United counter-attack that petered out. Ederson tried to start a counter-attack but, in a classic example of less haste more speed, only found Scot Mctominay who placed a forty-yard shot into the empty net to send Old Trafford positively giddy as the stands, bench and players lost their minds.

The win leaves Manchester United two points clear in fifth and in control of their Champions League destiny whilst City stay second but with their eyes firmly fixed on the two cup competitions. Guardiola’s men face home games against Arsenal and Burnley before two vital cup games against Real Madrid and Newcastle United. Manchester United move onto former manager Jose Mourinho at their first visit to the new Tottenham Hotspur Stadium in a key game for Champions League qualification.

As Ederson threw the ball out in the 97th minute, failing to notice McTominay, it was reminiscent of a quarterback failing to see a safety as a pass was intercepted and returned for a touchdown. As McTominay’s shot landed in the net in the lashing rain the game seemed to have taken on the epic feel of Super Bowl. The Old Trafford crowd hasn’t been that alive for years. The players piled on in glee and the bench was positively giddy.

The sight of subbed off players Fernandes and Martial collectively losing their minds at the sight of another player’s goal was a heartwarming sight for Manchester United fans and may suggest Solskjaer’s nostalgia act has actually tapped into something in the United dressing room. There is no doubt the current run of form suggests something is brewing again under Solskjaer. This season can only bring cup success but perhaps this is a foundation for a sustained league campaign next season. It is churlish perhaps to suggest a league campaign will need more than counter-attacking football, but Solskjaer might be closer now than he has ever been to being the solution to Manchester United’s problems.

Guardiola’s dead rubbers may have a cup problem

In truth, Manchester City weren’t so bad on Sunday but just seemed to lack the desire required. This may be a problem going forward as Guardiola navigates an end to the league season with nothing riding on it in amongst must win FA Cup and Champions League knock out games.

Desire, intensity and concentration are hard to turn on and off and given Guardiola’s sides have a worrying tendency to let one setback make the roof fall in in Europe – see Bayern Munich vs Barcelona 2015 and City’s three exits under Guardiola to Monaco, Liverpool and Spurs – the Spanish genius may worry about his sides ennui on Sunday.

The young full-back had a superb game on Sunday and must surely be in with a shout of Euro 2020 call up. His attacking play is improving but nowhere near that of Trent Alexander Arnold’s and the young Liverpudlian should go into the tournament as England’s first choice and the tournaments best full back. But if a tight game in the knockout phase is at danger surely wan Bissaka would be the perfect man to get England over the line?

Wan Bissaka won four tackles and 12 duels on Sunday – both game highs – and rendered Sterling an irrelevance as Manchester City’s much-vaunted attack struggled. In fact, given Sterling’s struggles, he will be praying any England call up sees them on the same side in training.

VAR part of the furniture

The saddest part of Sunday’s run of bizarre decisions is that they barely seemed to cause a stir within the crowd or the players. On any other day, the Gundogan non-foul on Fernandes and the Aguero offside would have been cause for apoplexy. The Fred booking when blatantly fouled for a penalty barely raised a shrug from the Old Trafford faithful or the players.

The speed at which VAR decided Fred wasn’t fouled was laughable and even more so when Aguero’s goal was disallowed after minutes of calculation. One hopes modifications are in the pipeline but don’t hold your breath.

There’s no need to detail how big a miss Aymeric Laporte and Kevin de Bruyne are to City, the league’s second-best centre back and best player would be a miss for any side.

Riyad Mahrez though may be emerging as a less unheralded talisman. The defeat on Sunday was City’s seventh league defeat of the season. Of those seven, Mahrez didn’t start against four and was withdrawn with the scores level before late winners in both games against Wolves. Only the defeat when down to 10 men saw Mahrez start and be on the pitch when the loss occurred.

As talented a side Manchester City are they do have a tendency to resemble “Curb Your Enthusiasm” – sublime and unique at their best and formulaic and lifeless at their worst. Even the superb de Bruyne often resembles a system player who can only function in a certain way of Guardiola ball.

Mahrez is the one player who seems to have still retained his unique sense of style. His substitution on Sunday breathed new life into the derby. His 31 minutes saw him lead the way in runs and key passes of any City attacker and with 23 goal involvements already this season, his jinking, individual style may be the way forward ahead of Bernardo’s jaded, selfless performances.