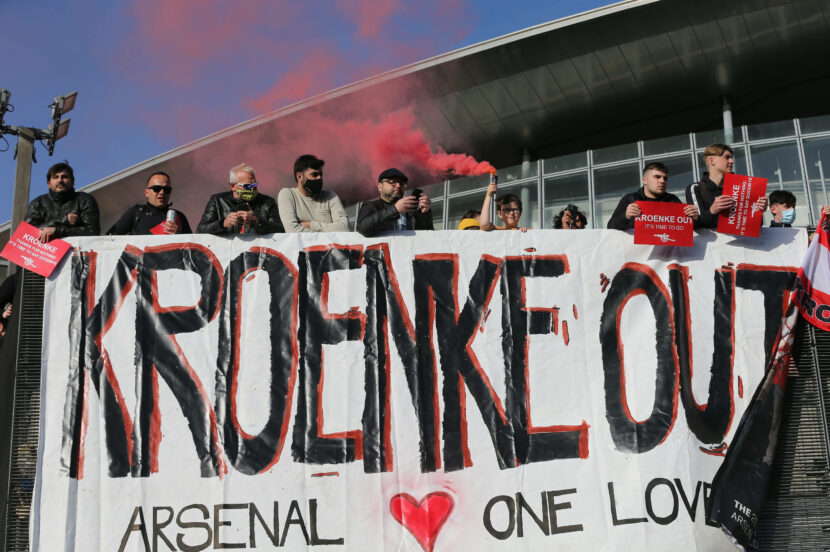 Music to the ears of Arsenal fans: Spotify owners interest has the backing of some old classics

Fans have shown their power in recent weeks after the proposal of a European Super League was met with uproar from the footballing world. Fans in England took to the streets in protest against the idea before the teams involved quickly withdrew. But it seems the protests are just getting started, with Arsenal fans looking to show their power again.

A reported 1,000 fans took to the streets last week in protest against the club’s owner, with more to be expected in the next few weeks. The ESL proposal seems to be the straw that has broke the camels back, who’ve shown discontent for their American owners for some time.

This has caught the eye of Spotify owner and Arsenal fan Daniel Ek. The Swedish billionaire is expected to make a £1.8 billion offer to the Kroenke’s next week, who already has the backing of some old classics of the club. Thierry Henry, Dennis Bergkamp and Patrick Vieira have all shown their support for the Swede, with Henry stating he doesn’t recognise his club.

The Spotify owner has expressed a desire to work with the fans, giving the supporters veto power over key decisions. This will be music to the ears of the Arsenal fans around the world, who’ve believed their voices have not been heard since the Kroenke’s arrival.

Arsenal has been underachieving in recent years, with the club on course to finish below their North London rivals for the fifth straight season. Once a powerhouse of English football, there’s a good chance they’ll end the season outside of the top 10 for the first time since 1995.

It seems the North London club has fallen behind their rivals in terms of financial backing. They may have spent high sums of money on Pepe and Aubameyang in recent seasons, but this falls well short of their league rivals. Arsene Wenger may have produced league titles in the 90s and early naughties with a smaller transfer budget at his disposal, but it’s just not achievable in this day in age.

Daniel Ek wants to bring the glory days back to the club, and there’s no reason this cannot be achieved. Arsenal has all of the foundations to turn this around, with a worldwide reputation, a tremendous stadium and a group of young players who have limitless potential.

Arsenal as a whole has been a toxic environment in recent years. The fans have grown hateful of their owners, with this hate overflowing onto the pitch. Players have voiced their concerns in the past to ask for support from the fans, with their performances clearly suffering. The club needs a fresh atmosphere and a new lease of life.

The only question is, will the Kroenke’s sell?