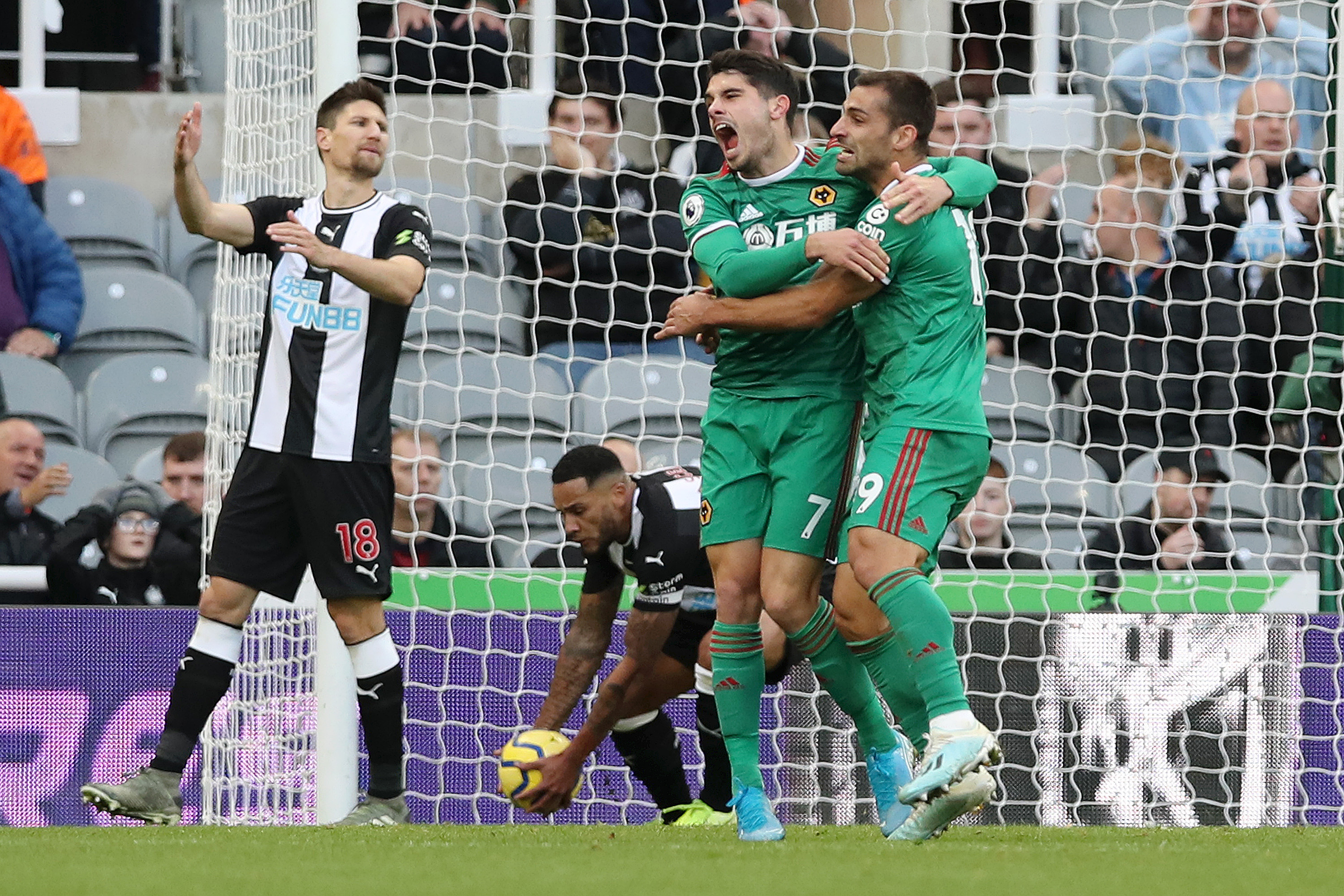 A game of two halves saw Jamaal Lascelles give Newcastle the lead before Wolves fought back to get a second-half equaliser through Jonny Castro Otto. Sean Longstaff left St James’s Park anxious after a high leg in a tackle resulted in immediate dismissal and Wolves nearly nicking a late winner.

Newcastle took the lead minutes before the end of a stale first half through a Lascelles header but truth be told, neither side seriously threatened either goal in the first 45 minutes.

Wolves came out the blocks quicker in the second half but allowed more gaps for Newcastle to expose on the break. The visitors continued to pressure Newcastle and began creating better chances when their dominance down the right flank prevailed as Matt Doherty’s cross was parried into the path of Jonny Castro, who volleyed Wolves back into the game.

Conceding woke Newcastle up as they then began to threaten the Wolves goal. However, Longstaff’s reckless high leg from a slide tackle got him sent off, leaving Newcastle with ten men for the final ten minutes. Despite a late push from Wolves, the result ended as a stalemate at St James’ Park.

When Newcastle were seemingly running out of ideas to get on the scoreboard, once again up stepped Jamaal Lascelles. The centre half stayed forward after Wolves had pushed back a set-piece to find Longstaff out wide. His ball into the front post met the head of Lascelles who muscled between two of Wolves’ defenders to power the ball past the helpless Rui Patricio as his last game as a twenty-five-year-old produced his first goal of the season. While he struggled to contribute with goals last season, he netted three efforts two seasons ago whilst in his 2015 debut Premier League campaign, he accumulated 18 appearances and scored two goals.

His consistently strong performances on the pitch have earned the English man the right to be captain too. However, it’s not only his leadership on the pitch that makes him the heart of the team; he has shown maturity and support for managers and the club off it too. His recent comments since Bruce’s arrival have certainly boosted the squad and this positive and supportive attitude shows how he has grown at this club and become a role model for youngsters and other players. His goals tend to come when his team aren’t producing promising attacks and Sunday was one of those goals. He can be a legend in this Newcastle era and even mount a serious challenge to start in the England squad.

Traore excelled when stunning defending champions Manchester City to beat them with a late brace a few weeks back. But Nuno Espirito Santo usually utilises the wide man as a substitute using his pace and strength to change games in the second half. Last season, 21 of his 29 nine appearances cam as a substitute and he only netted once but on Sunday, he had to participate as wing-back from the start of the match.

Wolves had a poor first half, and the Spaniard was forced to spend much of it defending. The forward was exposed as he struggled to tackle his opponent and Newcastle continued to come down the left. Ultimately, his defending was likely to become more anxious as the pressure continued down that flank.

However, he was unleashed in the second half when changing to a back four and continually got the better of Willems in the Newcastle defence. He sat higher up the wing and was beating his man more often than not, as well as running into space to supply crosses into the box,  proving how much he has developed since last season. He set Doherty through down the right, whose cross ultimately ended being volleyed in by Jonny. The increased number of fixtures means he’s racking up more starts this season which can only help the 23-year-old’s development. While he’s out of position at right-back and likely worrying his defensive teammates, you can count on him troubling opposition defences whenever he’s introduced in an attacking role.

The Magpies sacrificed possession to Wolves for portions of the game to set up for quick counter-attacking football. While Newcastle have numerous players with the ability to burst past opposition, they rarely were able to because of a poor final ball. Arguably Newcastle should have tried to take the game to a makeshift Wolves defence and exploit their inexperience. However, when Newcastle were in possession, they were quick to offload a loose pass to the opposition.

On the break, they demonstrated their pace, but again, the quality was poor to get the ball to the feet of the racing Magpies. There were moments where a hopeful long pass would release Miguel Almiron behind the defence, but Newcastle need to begin exploiting their opponents by building up the play to create gaps for their rapid players. Allan Saint-Maximin was a bright spark and often skillfully carried the ball beyond the midfield, creating promising chances in the final third.

Jetro Willems would charge down the flank for support while Almiron supported on the opposite side and sometimes overlapping Joelinton to create problems. Newcastle need to continue to utilise these sprinters better if they want their forwards to convert more goals.

As the packed festive period approaches, Wolves already have to navigate a congested fixture list through October into early November. They have a midweek quarter-final clash against Aston Villa in the League Cup and a week after, another Thursday night Europa clash hosting SK Slovan Bratislava, along with regular Premier League fixtures mixed in. Jota showed concern early on on Sunday of a shoulder injury while Matt Doherty found himself starting at centre back standing in for the injured Ryan Bennett and Willy Boly. Traore started at right wing-back while Romain Saiss was also an irregular starter.

With these numerous fixtures, Nuno will be concerned to see some key players already miss out on games and others seemingly getting closer to following them into the physio room. Their slow start was erased with a good run in form, but Wolves’ matches have become increasingly tighter as Nuno has to experiment with his squad to avoid tiredness and more injuries. Could Wolves season start to come undone in the fast and furious Premier League winter schedule with their Europa and League Cup success?

Next up in the Premier League, Wolves travel to the Emirates whilst Newcastle travel to West Ham United.