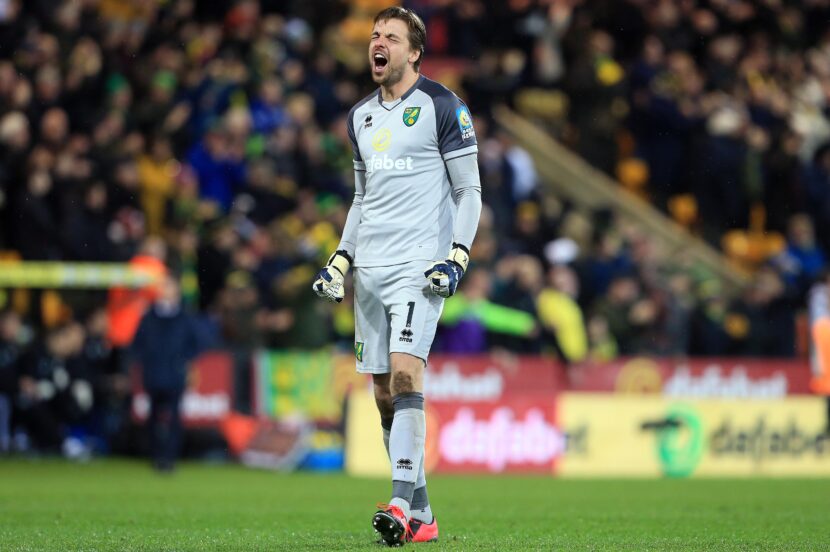 Norwich City produced a defiant display to out-fight Champions League contenders Leicester City and grab a vital three points that could be the makings of a last-dash attempt to escape relegation.

The game started off in timid fashion, with a first-half that was not uneventful but was hardly set alight. Leicester had the better of the game and played the better football, testing Tim Krul with a few tame shots, with Dennis Praet’s instinctive shot all but certain to beat the keeper until it bounced off the outside of the post. The Canaries were hardly absent, creating a handful of their own chances, but their play was marred with mistakes that stopped them from hitting their stride.

Both teams reinvented themselves in the second half, but at the start the Foxes looked the more likely to do so. And they were as Kelechi Iheanacho scored a great solo goal only a few minutes after the break, only to be ruled out by VAR when he was adjudged to have handled the ball in the build-up. This chance was just about the last Leicester had, as it sparked life into Norwich and they lost their momentum.

From here on the Canaries were on top and the Foxes off the pace and they received a warning shot when Kasper Schmeichel tipped Ondrej Duda’s shot over the bar before saving another shot of the Slovakian’s just a few minutes later. All this pressure came to a head, just minutes later, when Jamaal Lewis collected Max Aaron’s cross and lashed a superb, curling strike past the Leicester keeper and put them rightly ahead.

Leicester never really bounced back. They made changes, upped the tempo, but could find no way through the Canaries’ defence. As the clock raced towards the end of the extra time there was never any serious threat to Norwich’s lead and the full-time whistle sounded to give Daniel Farke only his fifth Premier League win. The three points bring Norwich up to twenty-one, although still bottom of the table, and leaves Leicester stagnant on fifty.

Does the great escape begin?

Daniel Farke has said that his side will need a ‘miracle’ to survive relegation from the Premier League this season – but we have seen such things happen before. Leicester’s own great escape under Nigel Pearson happened only five years ago, and Norwich themselves seem to be in an even stronger position to fashion something similar.

The Canaries have played, and demonstrated on Friday that they still can play, some great football; but have lacked the defensive rigidity needed to keep leads or stay in the game long enough to give them a chance of winning. But the football itself is evidence enough that they can keep themselves afloat in the league, and recent results such as their narrow loss to Liverpool and this win against Leicester demonstrates that they can have the solidity needed to escape relegation.

While Farke’s side have been inconsistent, and have a tough run-in, one thing that might give them some hope is the fact they have been better against teams that are higher up the table. A good opening-day showing against Liverpool, an emphatic home win against Manchester City, and draws against Tottenham and Arsenal have shown us what they can do. While fixtures left against Sheffield United, Chelsea and Manchester City may look bleak to other relegation-facing sides, Norwich will be reveling fixtures where they are the underdogs. These games, as they have shown here, maybe what saves them rather than dooms them.

This loss marks Leicester’s fourth in seven games, contributing to half of all games they have lost this season, and means they have only picked up seven points over those fixtures. While their tremendous start has put them in a comfortable position, still far away from those teams looking to take the Champions League spots, this bad run of form may soon become unsustainable if they want to play European football next season.

This poor run of form seems to come from, simply, a lack of goals. Jamie Vardy’s amazing run of 17 goals in 18 games at the start of the season now seems in the distant past, as the striker endures his worst-ever run of form in the Premier League. Without other goal scorers such as James Maddison or Ayoze Perez firing in, they lack the teeth upfront to make the most of their creativity. It is a strange turn as the Foxes have gone from a side able to score nine goals in a game, now seem unable to even get one.

Arguments could be made as to whether Leicester should have strengthened offensively in January, but hindsight is always clearer, and only a month ago even a situation like this would have seemed unlikely. But things are quickly becoming worrying at the King Power Stadium, and without goals, a return to the Champions League could soon be under massive threat.

Man of the Match – Jamaal Lewis

While the Norwich team could be given this collectively, Lewis’ moment of brilliance gets him the accolade. Only recently coming back into the team to replace the injured Sam Byram, Lewis has impressed in his return and he showed it yet again. This moment of brilliance caps some fantastic performances and a goal that, if we had the camera angles for it, may look just as good as Pavard’s world-cup screamer only a few years ago.

Norwich travel to north London to play Tottenham away in the FA Cup on Wednesday, before then hiking north to Sheffield where they will face Chris Wilder’s Blades next weekend. Leicester also have a mid-week FA Cup game, at home to Birmingham City, and are at home against next Monday to play another relegation candidate in recent-enemies Aston Villa.