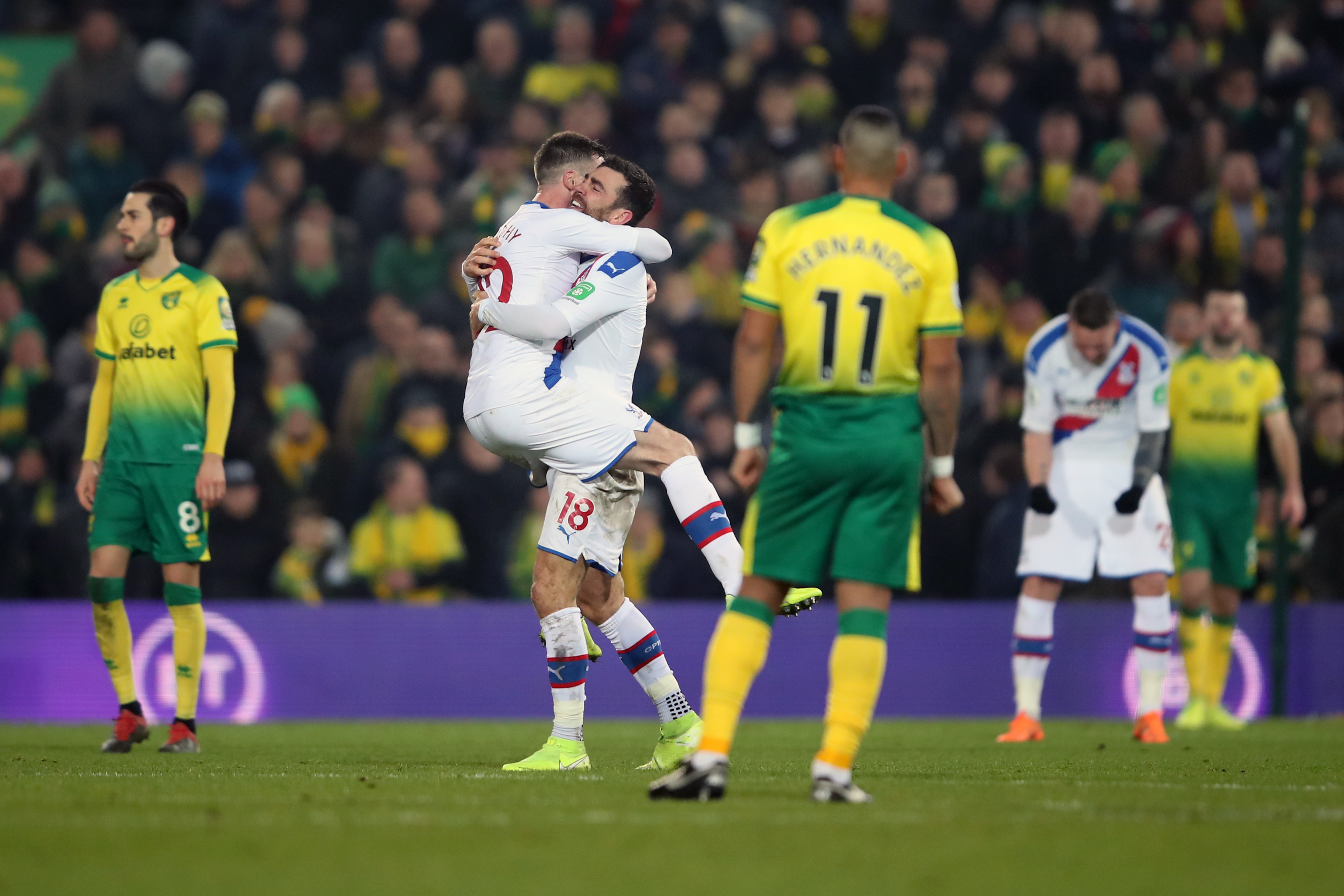 Crystal Palace scuppered Norwich City’s chance of getting all three points with a late equaliser at Carrow Road on Wednesday.

The Canaries were left ruing missed opportunities as a Palace strike, just minutes from time, kept them even further from Premier League security. It was a strong start from Daniel Farke’s men as homegrown star Todd Cantwell, who has garnered interest from both Manchester clubs already this January, tapped home after some deft play between himself and midfield colleagues, performing his trademark dance in celebration.

Dutch full-back Jairo Riedewald had a chance on goal at the other end as Norwich stopper Tim Krul was left scrambling, but last-ditch defending somehow saved the Canaries this time round. A driven cross from Max Aarons gave Cantwell the chance to double his tally but his half-volley failed to trouble Vicente Guaita before Aarons had a chance himself soon after but struck his effort past the left-hand post.

Emi Buendia’s superb free-kick was kept out with a superb reflex save from Guaita in the second half before Mario Vrancic also had an opportunity to double the Canaries’ advantage but failed to convert from point-blank range.

Midfielder Kenny McLean was handed the last of Norwich’s major chances, striking against the underside of the bar in a game where Palace found clear-cut openings harder to come by, despite dominating possession.

The closing stages saw Palace forward Connor Wickham slide the ball into an open goal, only for the offside rule to intervene. However, in a cruel twist for Canaries fans, VAR later determined the goal valid. It will be a harsh one for Daniel Farke to take. The German has questioned his trust in VAR many times this season and will be upset that his side failed to earn three points.

Following the game, he said: “Of course, it feels a bit like a loss. Crystal Palace don’t concede many goals and our game management today was fantastic. The goal was a cruel and tough decision against us and we are all disappointed.” Farke was also hopeful about striker Teemu Pukki who suffered a hamstring pull in the match.

Crystal Palace boss Roy Hodgson said: “The fine margin, this time, has worked in our favour.” He acknowledged his side’s injury crisis, which saw youngster Brandon Pierrick get some minutes, saying: “We had players out there playing through an injury. Very few players were 100% fit and ready to go. However, these players consistently surprise me.”

Teenage talent Brandon Pierrick made his debut for Palace in this game, introduced as an 83rd-minute replacement for Martin Kelly. The English prodigy, 18, supplied Wilfried Zaha with the all-important pass which led to Connor Wickham’s equaliser at the death. Pierrick became the youngest player to feature in the top flight for Palace since George Ndah’s appearance against Liverpool in 1992.

Norwich fail to hang on… again

Norwich City have lost 14 points from winning positions this season – only West Ham have lost more. This is an issue that desperately needs resolving if the club have any chance of survival. Chances from Cantwell, McLean, Vrancic and Aarons all went begging after the former’s initial strike and Norwich City’s inability to get a firm grip on a game after going ahead could spell their downfall.

Crystal Palace striker Connor Wickham’s controversial goal was his first strike in the Premier League in over three years. The Englishman, 26, has battled countless injury crises since an initial knee complaint back in 2016. November of that year was the first time he scored for the club.

Job on the line?

Despite poor results leaving Norwich rock-bottom, there seem to be limited reports of Daniel Farke’s job being in danger. Many Norwich fans are still keen to point out the positive aspects of Norwich City’s play. They can exhibit attractive, attacking football and defensive security but seem to drift in and out of this within games, unable to maintain an all-important balance.

A group of the Canaries faithful are beginning to lose patience in the man who brought them back into the top flight, but will a new manager do better?

After Sunday’s FA Cup tie at Preston North End, Norwich City face the challenge of Manchester United next in the Premier League. Meanwhile, Crystal Palace are up against Arsenal in their next league game, facing Derby County in the cup.