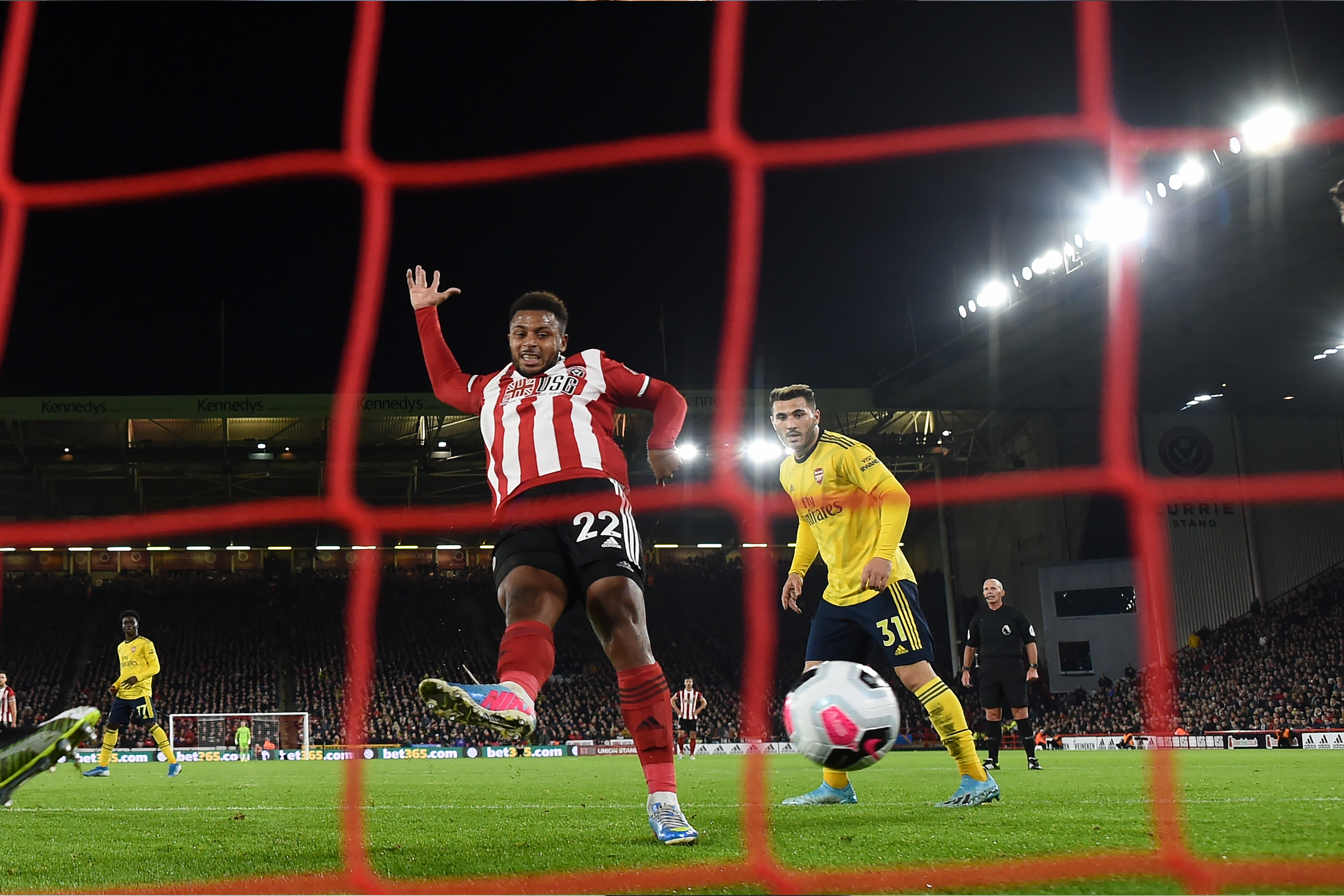 Sheffield United battled to an impressive victory over Arsenal at Bramall Lane that lifts the newly-promoted side to ninth in the Premier League table.

The Blades showed the greater cutting edge, as Lys Mousset’s 30th-minute goal was enough to beat the insipid Gunners in front of a boisterous home crowd. The Frenchman found himself completely unmarked in the Arsenal box and latched onto a knock-down from a corner to give the home side the lead.

It typified the north London side’s performance on the night: lacklustre and confused. Sheffield United provided a stark contrast, as Chris Wilder’s side jump into the top half of the table and once more proved how effective their system is.

A statistical quirk to come from Bramall Lane on Monday night was that the home side have as many away clean sheets in the Premier League as Unai Emery in his time at Arsenal. A damning indictment on the Spaniard, but also a sign of how well Sheffield United have stepped up to the top tier.

The first side to contain the Gunners away from home this season, they limited the visitors to nine shots overall, whilst registering eight themselves. This is a testament to the effective game management from the home side; despite being behind for 60 minutes, an Arsenal goal never felt inevitable. For all the away side dominated possession, the rigidity of the defensive system held true.

This is now the third time Sheffield United have come up against a ‘top-six’ side and have not only risen to the occasion but arguably performed better. Against Liverpool, they successfully targeted Alexander-Arnold’s defensive foibles and were unlucky to not emerge from the game with more.

On their visit to Stamford Bridge, they proved themselves a match for the vibrant Chelsea attack and earned a creditable 2-2 draw. The common theme is the ability of Wilder to assess his opposition and exploit their weaknesses without sacrificing his over-arching game plan.

Individuals come to the fore

The majority of the discussion around Sheffield United focuses on the ‘overlapping centre-backs’ that they deploy, often leaving the players themselves over-looked. Particular praise should be reserved for John Fleck and George Baldock. In midfield, the energetic Fleck tested Leno a couple of times from long-range and linked well with McGoldrick in a good move prior to the goal.

He reminds me of a central equivalent to Ryan Fraser. Squat in stature, he combines a technical assuredness in possession with a willingness to harass the opposition, and never shirks away from a 50/50 duel. Baldock at right wingback put in one of the most complete individual defensive performance I have seen all season.

Arsenal are often reliant on their left side to create cutbacks, but Baldock was not cowed by this threat. He proved more than a match for Arsenal’s attack, and only really got caught out twice all evening on the counter-attack: impressive when you consider the advanced nature of his role.

A contrast of systems

The main takeaway from the game from a tactical perspective has to be the gap between the two systems. Whilst Arsenal dominated possession, it was a sterile monopoly.

Sheffield United clearly prepared for the ‘build from the back style’ the Gunners utilise, so simply allowed the defence to have the ball deep in their own half.  Funnelling Arsenal’s play down the right-hand side meant the away team primarily progressed the ball through Chambers.

It was at this moment they instigated their pressure, causing the nominal right-back to lose the ball 28 times during the course of the game – the most of any Arsenal player. Although defensively solid, he also registered the second-lowest pass completion of his side.

This shows how well Sheffield United targeted this area of weakness amongst the Arsenal team, resulting in a failure for the visitors to transition effectively into attack. Subsequently, the service to Arsenal’s most dangerous attacking player on the night, Pépé, was stunted. This forced the Ivorian to come deep in order to collect the ball, meaning he had to operate lower than his fellow forwards.

Combined with an ineffective midfield display from Xhaka and Guendouzi, and the way the Blades rigidly stuck to their pre-planned strategy was a stark contrast to Arsenal’s incoherent display. The statistic that illustrates this most damningly is the passing direction – 63% of the Blades’ passes were forward compared to 32% of Arsenal’s.

He will rightly be criticised for his glaring miss that could have changed the momentum of the game, but the Ivorian was Arsenal’s best player on the night. Albeit that might be damning with faint praise, but he showed signs of what Arsenal fans hoped he would produce when he signed.

The move that led to his howler begun with his own great play in the centre of the pitch, before he smartly shifted possession out wide and burst into the box. It was the best chance Arsenal created all evening, accounting for over half of their on-the-night xG., and was mainly borne of his individual talent. I’ve spoken to Sheffield United fans who attested to his threat, as every time he picked up the ball he showed an endeavour juxtaposed to that of his team.

He was the Gunners’ main threat in possession and showed the ways he can act as a wide-creator. It was baffling when he was withdrawn after 78 minutes, but his display was undoubtedly a step in the right direction. As the cliché goes, ‘he just needs a goal’ before I believe we will see the best of him.

Fans were willing to give the Spaniard time at the start of this season, despite the way Arsenal completely capitulated at the end of last season. However, this appeared to the match where many lost patience. The investment in the squad over the Summer gave the supporters a renewed confidence and papered over the disassociation many felt over the Summer.

Despite inconsistent and largely uninspiring performances, the fact the Gunners sat 3rd in the table over the International Break extended this grace period. It feels as though the camel’s back has been shattered by this defeat. Surmising all the fears surround Emery’s management – a lack of philosophy, no visceral improvements in attack or defence, and bizarre line-ups – it represented another game in a string of muddled matches. Increasingly he appears to be a ‘cup’ manager, much happier to operate as the underdog as supposed to ‘the protagonist’ he infamously claimed early on.

With rivals for the top four faltering, it feels as though Arsenal could once more fail to qualify for the Champions League unless something changes soon. Nothing Emery has done thus far in his tenure fills me with confidence that he either wants to or is capable of making the necessary changes. Ahead are favourable fixtures on paper, Crystal Palace and Wolves at home, before a visit to the King Power Stadium, unless performances improve dramatically, the international break could be a very nervy time for Unai Emery.

As previously mentioned, the two outings for Arsenal appear easier than they are in reality. Crystal Palace at home last season saw one of the most embarrassing performances I can remember, with the infamous Mustafi mistake epitomising Arsenal’s self-destructive tendency. Wolves also turned up at the Emirates and put in an accomplished display last campaign, with the home side struggling to a 1-1 draw.

Sheffield United, undoubtedly buoyed by this result head to a West Ham recently defeated by out-of-form Everton. They should be confident of heading to the London Stadium after the Hammers’ poor performance at Goodison. They could put three points between them and their hosts with a victory, as they continue to climb the table.