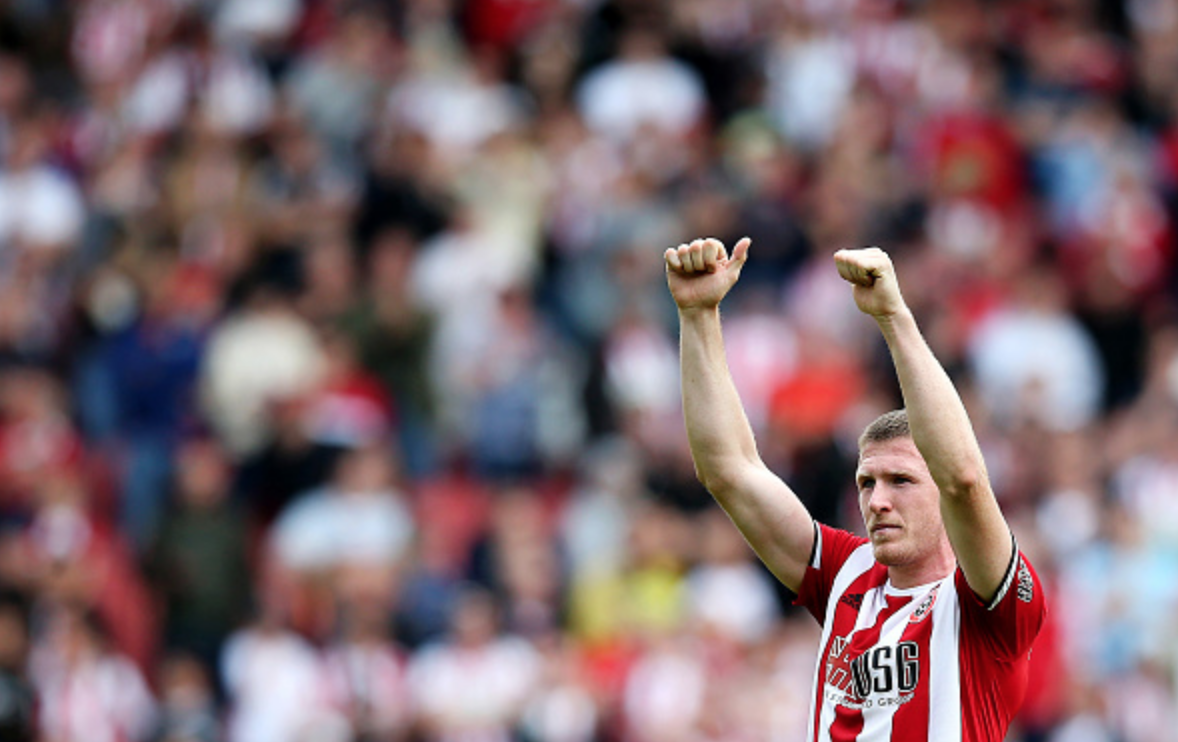 It had been 12 years since Bramall Lane last hosted a Premier League game, and on Sunday the home side secured their first three points of the season by beating a rather lacklustre Crystal Palace.

The first half was dominated by half chances and missed opportunities as both sides looked scarce of any attacking impetus. Benteke had the first chance of the game; beating Jack O’Connell on the right he shot from a tight angle, it was a tame effort and forced a routine save from Dean Henderson. Only minutes later, another chance fell to the Belgian striker. Andros Townsend dropped a shoulder, turned and put a cross into the six-yard box – only for Benteke’s header to deflect over the bar.

The Blades also had their fair share of half chances. Mid-way through the first half Enda Stevens had a shot which was blocked by the elbow of Joel Ward. However, a later look reveals that his elbow was tucked down beside him and there was little the defender could do about the on-coming ball. “VAR not very good”, was later chorused around Bramall Lane as referee David Coote waved away any speculation of a penalty.

The best chance of the half fell to David McGoldrick. Patrick van Aanholt was robbed of possession by John Lundstram, who proceeded to drill in a dangerous cross from the right. His cross went straight across the face of goal and all David McGoldrick had to do was poke it in – he ended up connecting with his shin and Vicente Guaita reacted well to deny a rebound.

Despite a poor first half of finishing, it didn’t take long for the deadlock to be broken in the second half. Only two minutes in and the Blades were in front. Luke Freeman’s first touch was brilliant in the build-up, before delivering a powerful cross which the goalkeeper parried straight into the path of John Lundstram, who smashed the rebound into the top of the net.

The goal lifted the roof off Bramall Lane as the quick start ignited a chorus of “Allez, Allez, Allez’s” which rang out from all four sides of the stadium.

The second half then continued in a fashion much like the first. Palace became increasingly frustrated as they failed to carve out any clear cut chances. Sheffield United pressed on and looked more likely to double their lead. The Eagles goalkeeper, Vicent Guaita, denied two late chances from Jack O’Connell and Oliver McBurnie as he kept the deficit to just one.

There won’t be many louder cheers for a 1-0 league win this season, but the Blades hung on to the end and saw out their first win of the season.

John Lundstram shines for the Blades

It’s still early days in the Premier League with only two games gone, but John Lundstram is looking like a really key asset to the Blades. Last week his determination and endurance shone, as he controlled the left flank against the Cherries.

And again this week, the Englishman was everywhere – crossing in balls, tracking defensively, putting in challenges and of course scoring the winning goal. The 25-year-old joined Sheffield for around half a million pounds last year from Oxford United and has since helped his side climb to the Premier League.

His goal today was well taken, as he followed up on the keeper’s parried save. Lundstram hit it first time, high and powerfully into the top corner as he bundled the ball home from close range. This goal will only increase his confidence as he is shaping up to be an important piece in the Sheffield United puzzle.

Collectively, both sides managed 21 shots this afternoon, but only seven of those were actually on target. Going forward into the rest of the season it is evident that both sides will struggle to score goals, whether it’s down to a lack of creativity or just poor finishing. This could prove to be the flaws in both sides’ seasons as they are both equally hoping to avoid relegation this season.

Palace looked the worse out of the two sides today as they were slow in possession and were devoid of any creativity. Overall the Eagles conjured up just six shots throughout the match and even looked slow with their star man Wilfred Zaha playing.

Benteke was also a culprit for spurning chances in front of goal, as he seemed to be a yard slow in the box, as well as firing wide on several occasions. The Belgium striker cost the club £32 million from Liverpool and has registered just four goals in 49 Premier League appearances for the Eagles. The link-up between Zaha and Benteke was equally as poor. Today, the two forwards didn’t complete a single pass to each other throughout the course of the match – which is probably the underlying reason why they can’t seem to score.

Crystal Palace look in trouble
Two games gone, no goals scored, 14th in the table – the Eagles could be in for a long season. Last week Palace rode their luck in a goalless draw against Everton as they were dominated from start to finish, and this week was much of the same. Chris Wilder’s team seemed to be the more creative and diverse throughout the game and asked a lot more question’s of their opponents – it could have easily been 2 or 3 nil to the hosts.
Last season Hodgson’s side finished well in 12th position, scoring 51 goals by the end of the season. And two games in last season they had three points had scored two goals. The rough start to the season will only get worse for Crystal Palace, as next up they face a trip to Old Trafford where they face a dangerous Manchester United side.
Sheffield United are here to stay
The Blades remain unbeaten as they continued their impressive return to the Premier League. Today’s victory against a well established Premier League side showcased their belief that they are here to stay. The hosts dominated the game, having more shots (15 compared to Palace’s 6) and more corners than their opponents. Not only did they seem confident going forward, but they also controlled the game.
Embed from Getty Images

The midfield partnership of Chris Basham and Oliver Norwood worked well today, as they just kept the ball moving and playing the simple passes. Not only did this help retain possession, but it was clear at times that Palace were struggling to get hold of the ball and ultimately lead to the Eagles fatiguing. Chris Wilder will be delighted with another well regimented and resolute performance from his side today.

Chris Wilder’s men stay put at Bramall Lane as his side host Brendan Rodger’s Foxes as they look to continue their unbeaten run, whilst Roy Hodgson’s side will travel to Old Trafford as the Eagles look to score their first goal of the season.