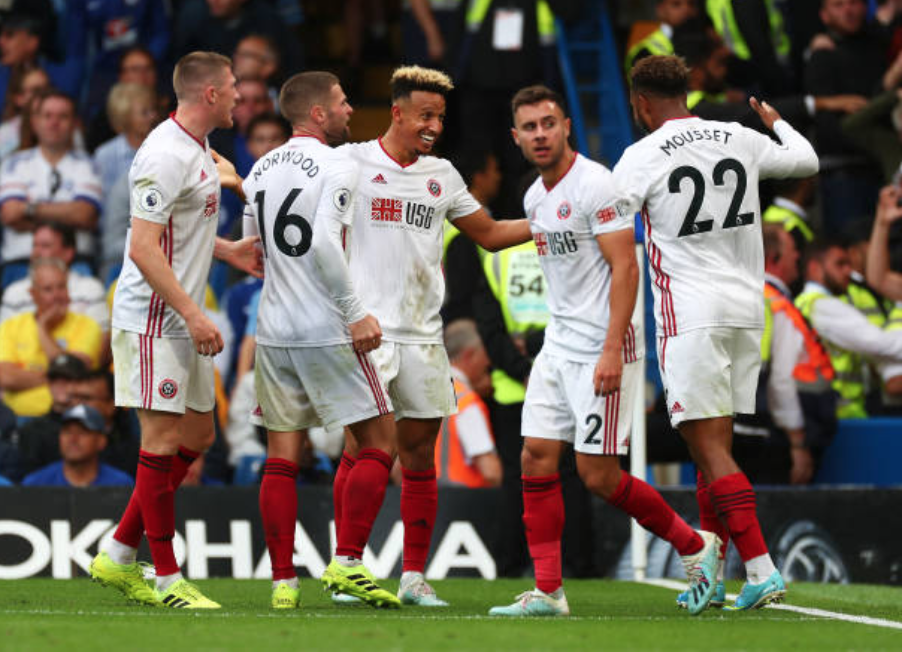 Sheffield United welcome the Saints to Bramall Lane this Saturday as both teams will be looking to build on hard-fought draws against Chelsea and Manchester United last time out.

Sheffield United’s return the Premier League set them as early relegation candidates, but inspired performances against Chelsea and Bournemouth shows how they are oozing with confidence. Last time out United fought back a two-goal deficit against Chelsea with Wilder’s side managing to turn the game on its head in the second half and steal a point at the Bridge.

However, this week poses a different type of threat. Southampton will be more respectful of United’s threat, and will, therefore, sit off the hosts and likely catch them on the counter.

The Blades shouldn’t be too wary of Southampton’s defence though; only four games in and the Saints have conceded six goals and kept just one clean sheet. With this in mind, Wilder will look to try and take the game to the visitors, starting with a high tempo and intensity will be important in the early moments. Having said this, the early stages of games are in fact where Sheffield have been lacking.

So far this season the Blades haven’t scored in the first half of any game and have conceded first in three of their four games. In order for Wilder’s side to get back to winning ways, it looks imperative that they get off to a quick start this weekend against the Saints.

Southampton didn’t have the best start to the season as they lost their first two games, but their last outing against Ole Gunnar Solskjaer’s side will have provided some much-needed encouragement for the rest of the season.

The second half headed equaliser, courtesy of Vestergaard, put the Saints level against Manchester United two weeks ago at Saint Mary’s. But goals haven’t been a common theme of Southampton season so far and within the first four games, Hasenhüttl’s side have scored just four goals. They have also recorded the least amount of shots on target in three of their four games so far, suggesting that there could be some finishing issues for the Saints.

Earlier this summer Southampton confirmed the signing of Danny Ings from Liverpool. The 27-year-old played out a season-long loan last season, scoring seven goals and assisting three times. Ings came as a much-needed addition for Southampton as they had injury problems with Shane Long and Charlie Austin. Ings has already scored this season and Southampton will be looking to him to help bolster their strike force alongside Che Adams and Shane Long.

Elsewhere on the pitch, Southampton look short of attacking threat. Nathan Redmond is out injured at the moment and he carries a lot of the attacking impetus that usually Southampton have. Redmond has scored 21 times for the Saints and assisted 15, so he will definitely be missed. Southampton though do pose a great threat from set-pieces with the last game week a great example of this, where Vestergaard headed home from a corner.  In order to score goals, Southampton may have to utilise James Ward-Prowse’s pin-point delivery and encourage the likes of Bednarek and Vestergaard to come up from the back.

The warning signs are there for Saints – lack of goals, poor defence and years of flirting with relegation. Are they on their way down?

Sheffield United fear that both David McGoldrick and Callum Robinson could miss the match against the Saints on Saturday. McGoldrick had a great game for the Republic of Ireland and scored in the 1-1 draw against Switzerland. But the striker was withdrawn from the squad and has returned to Sheffield with the Ireland boss Mick McCarthy later confirming that McGoldrick arrived at the national side’s training camp with a shoulder injury.

He later commented on his fantastic performance saying “He was brilliant from start to finish and capped off a great performance with a first senior international goal that was no more than he deserved”.

As for Robinson, he felt a slight tweak in his hamstring during the second half of their Euro 2020 qualifier and this will be a huge blow for the Blades, following his inspired performance against Chelsea before the break.

McCarthy also said that “Callum felt his hamstring in the second half of the game, so it is best now that he also goes back to Sheffield United for treatment.”

John Fleck is also nursing a hamstring injury and has returned to Sheffield for tests, likewise the severity of his injury is unknown.

Southampton will be without Nathan Redmond this weekend as he is recovering from an ankle injury – the Englishman is expected to be back around the 20th September.

It seems Southampton may have shot themselves in the foot as they look a little short on players, after loaning out seven players to the likes of Celtic, Galatasaray and West Bromwich Albion. Austin, Forster, Gallagher, Hoedt, Johnson, Lemina and Elyounoussi make up the list who are unavailable for the Saints.

Within the squad, Ryan Bertrand looks likely to be fit enough this weekend’s clash after recovering from an ankle injury. However, Southampton could be without the services of Obafemi, who is set to miss the trip to Sheffield with a hamstring injury.

Chris Wilder spoke about making Bramall Lane a fortress and it’s beginning to look like a really tough away fixture. Southampton did look better against United and I expect a bit of a scrappy game with both teams likely happy to take a point.