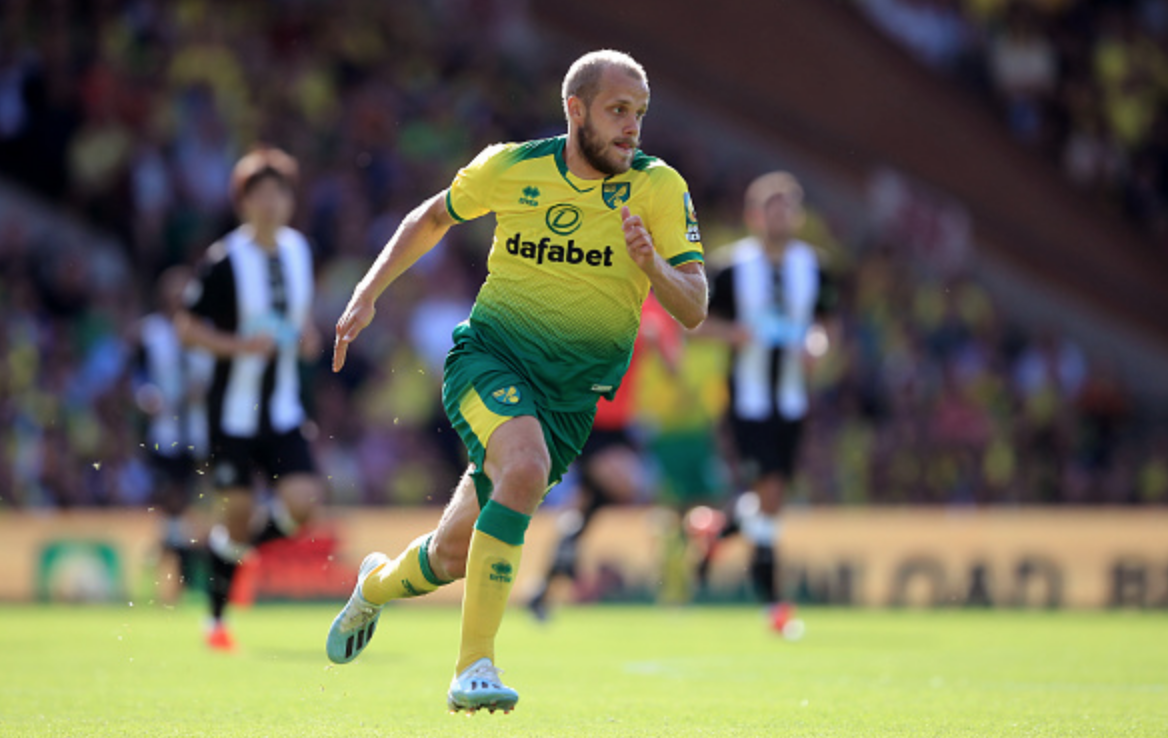 Teemu Pukki: Norwich City’s talisman who is lighting up the Premier League

Two matches into the new season and we’ve already witnessed two hat-tricks in the Premier League – one from Manchester City’s Raheem Sterling last weekend and now one from newly-promoted Norwich City’s Teemu Pukki.

The hat-trick came during their emphatic victory over Newcastle, with the Fin claiming all three of the Canaries’ goals in the 3-1 win. Pukki looked dangerous the previous week against Liverpool in the opening game, but Newcastle presented enough opportunities for the 29-year-old to convert three times over, which he did clinically.

His first goal, in particular, must have been re-watched a fair few times by Norwich fans by now – an absolute cracker of a volley gave Pukki’s side the lead after 32 minutes. The other two goals should not be overlooked though, as they were both finishes that are trademarks of a striker that possess natural finishing talent.

The Championship’s top scorer of last season did not go under the radar in Gameweek one either, despite his team being beat 4-1 by the European champions Liverpool. The Fin seized the first of his four-goal tally in that match after looking sharp for much of the evening.

Within a team that wasn’t treated to the warmest Premier League welcome that day, Teemu Pukki stood out in the Norwich squad. This being the opening game of the season, the spectators were manifold and Norwich fans certainly gained some consolation from the striker’s performance after a miserable day in defence.

Racking up 29 goals in the Championship last season was no small feat and with Pukki off and running in this year’s Premier League campaign, could he challenge the golden boot at the end of the season?

The top of his trade

At 29 years old, Pukki is certainly an experienced striker, evidenced by the manner in which he has taken his goals thus far. After a four-year spell with Danish team Brondby IF, Pukki joined Norwich City for free at the beginning of their league-topping campaign and is now only participating in his second season at the Canaries.

The telling stat is that, in his last three seasons, Pukki has scored a total of 66 league goals. The striker has mastered the art of sticking the ball in the net – Norwich picked up on this and decided to sign him for free. Bearing in mind the decisive role he played on Norwich’s road to Championship glory, he must be one of the best free transfers to be currently playing in the Premier League.

Of course, as it is so early in the season, there is a chance his goalscoring form tails off as the pressures of being in England’s top division take their toll. However, his goal conversion rate of 29% shows that if Pukki is given the chances, he will continue to score – and Norwich have certainly displayed impressive attacking qualities that will present Pukki with opportunities in a game, even if they do run into defensive problems.

To put the goal conversion stat in perspective, while Pukki scores with 29% of his shots, Aguero scores with 24% of his, Kane with 22% and Firmino with 21%. Like many statistics, these percentages don’t tell the whole story, but you have to wonder what kind of level Pukki could have reached during his career if he had been playing for a top European club.

With such a high attacking rate, the determined forward would surely be a valuable asset to any team in England. He is a consistent threat to the opposition back line due to his desire to get into the best place to score from. 28 of his 29 goals came from inside the box last season, but only one of these was a header. So the Norwich midfielders certainly know what they have to do – it’s all about the direct approach to set Pukki up for goalscoring opportunities.

Always in the right place

It seems pretty obvious that Pukki must be in the right places at the right times to score so many goals, but we all know that this is part of the trade. The awareness that Pukki has to pull away from defenders and into the perfect place is fascinating to observe.

The Finnish international will try to find any areas of space in the attacking third where he could receive the ball along the ground. He is consistently aware of where defenders may be leaving spaces, meaning those guarding the goal have to be constantly switched on. If Norwich can keep producing quick attacks and provide the ball fast and low to Pukki it seems he is going to find the back of the net.

On top of this, Pukki seems happy to come into deeper areas if necessary, but avoids coming too deep, perhaps to conserve energy for his bursting runs – another part of his attacking style. Although not possessing blistering pace, Pukki has enough speed to be able to make those penetrating runs that can catch a defender off-guard, or the darting runs that are nearly impossible to react to.

So Norwich have a range of routes to follow when attacking. When dealing with pacey defenders, Pukki may opt to keep his distance from them and find spaces in the box to shoot from. Otherwise, he will look to run in behind the defenders, formulating his own path to goal, rather than simply acting as the apex of an attacking move.

Will he keep it up all season?

With Pukki’s price slowly on the rise, fantasy football players may be tempted to include Pukki in their team for the upcoming matches. However, with games against Chelsea, West Ham and Manchester City on the agenda, it may be wise to hold off until the Norwich striker has been put through his paces against these teams.

Having said this, none of these clubs have been structurally sound in defence so far this season, so Pukki may be licking his lips at the upcoming games. It’s a great start to life in the Premier League for the Fin, but can he maintain his form throughout the rest of the season? Only time will tell.