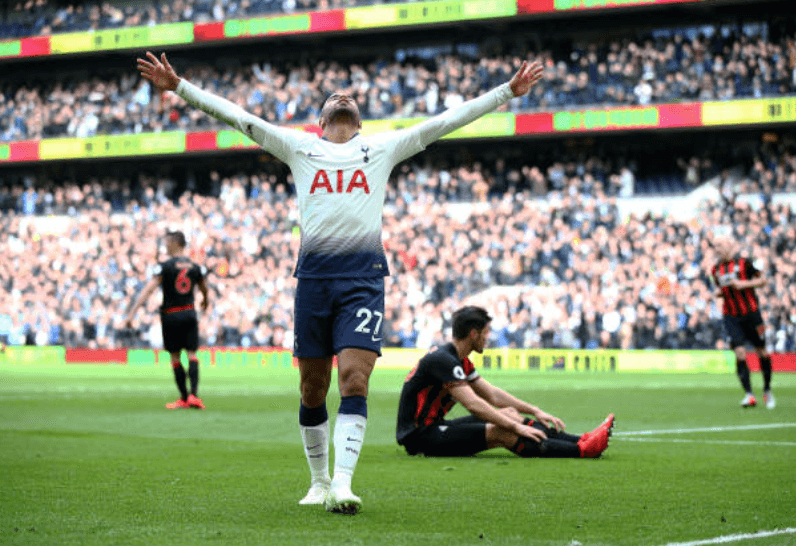 Tottenham saw off a mostly uninspired Huddersfield team on Saturday after a tremendous hat-trick from Lucas Moura improved Spurs’ goal difference by four.

The Brazilian wasn’t the first to open the scoring though – an unlikely goalscorer in the form of Victor Wanyama made it 1-0 to the home side. A deft touch from Llorente allowed the Kenyan to burst through the Huddersfield back-line and swiftly around the keeper to tuck in the goal.

Just three minutes later, Lucas was able to grab his first of the afternoon – a rocket of a finish straight under the arms of Hamer from a tight angle all but sealed the victory for Spurs within the first half hour of the match.

The rest of the match up until the 70th minute was largely muted, perhaps a consequence of the home team trying to preserve energy ready for two trips to Manchester City in the near future. However, Huddersfield switched on for a good fifteen minutes near the end of the match and some better finishing could easily have set up a nervous end to proceedings for Spurs.

However, Spurs managed to avoid that outcome before Lucas was able to grab another two goals – one a controlled finish in the box after a pinpoint cross from Eriksen and the other a hugely impressive finish into the top corner following the threaded pass from Son.

This win brings Spurs back into 3rd place before other fixtures this weekend and retains their 100% record in their new stadium. The fight for the top four is far from over but Spurs have made themselves strong contenders to play in the Champions League next season.

Lucas fighting for a place in the first team

One man in the Spurs squad on Saturday made a concrete case to Pochettino to why he should be part of the starting XI a bit more regularly than he has been. That man is of course the hat-trick hero by the name of Lucas Moura. The Brazilian has shown his quality on a few occasions this season but has continued to be more frequently named on the bench than in the first team.

However, his performance against Huddersfield should leave Pochettino no choice but to play the 26-year-old more frequently, with some crucial matches on the horizon. Lucas seems to add something extra to the Spurs team – some technical flair that few in the team, or even the league, possess.

It was certainly no ordinary hat-trick. All three goals were taken in some style from three quite different situations, giving the keeper little chance on all of them. Moura’s one-year-old son was quick to celebrate his father’s hat-trick on the pitch with a few strikes of his own at the end of the match.

Ten minutes of pressure all the Terriers could muster

The nature of Huddersfield’s defeat will probably frustrate Jan Siewert, although the German claimed that the scoreline flattered Tottenham somewhat. He may be right with that statement because Spurs had to endure a period of intense pressure when the scoreline was 2-0 as Huddersfield certainly had chances to get one or two goals of their own.

However, this spell of pressure didn’t come until around the 70th-minute mark – 45 minutes of game time since Spurs grabbed the second. Siewert will be questioning why his team didn’t decide to try and get something from the game for the rest of the 90 minutes. The team struggles to get goals at the best of times, so surely they need to approach these matches with a little more ambition.

Yes, Huddersfield are already relegated, and the chances of them beating Tottenham on the day were almost non-existent. However, the players on the team sheet on Saturday will undoubtedly be crucial in the Terriers’ Championship campaign next season and will need to convince their manager of their value to the club.

Spurs settling in at their new home

Tottenham have seen a slight shift in fortunes since moving into their new ground with three home wins on the spin. The team have not had to endure any teething problems so far, and it looks like the spectacular new stadium was worth the wait.

It’s easy to pinpoint Spurs’ recent run on form on their new stadium, but it’s important to note that their home form hasn’t actually taken much of a tumble recently. Their torrid run a few weeks ago mostly consisted of away defeats and not home ones. In fact, Spurs have won seven of their last eight home games. If they had kept the same away form they showed earlier in the season, they may still be title contenders.

But the short-term goal is to now finish in the top four and progress in the Champions League. Spurs have a new foundation to hopefully end the season on a high and potentially contend for the title next season.

Does Siewert have his work cut out at Huddersfield?

After watching Huddersfield this season, one thing is certain – changes need to be made at the club. An important summer of selling and buying is just around the corner for the Terriers, and Siewert will need to think about the kind of team he wants to be fielding in the Championship next season.

When the new manager took over from David Wagner, the boat had already sailed and Huddersfield were doomed to be relegated. The players simply weren’t good enough to constitute a Premier League team this season.

However, many of the players that miraculously kept Huddersfield in the top division last season were still a part of the equation this year – players like Aaron Mooy, Tommy Smith and Mathias Jorgensen, all of whom were benched on Saturday. Perhaps Siewert should have shown some more faith in these players to kick-start a promising end to the campaign.

Tottenham’s season is far from over with a minimum of six fixtures left to play in all competitions. Not only this, these matches are crucial and could make the difference between what would be considered a successful season or an unsuccessful one.

Manchester City is their next test in both the Premier League and the Champions League. With a 1-0 aggregate lead on City in the Champions League, Wednesday’s match is set to be a tense one and a chance to reach a European semi-final for the first time in 35 years.

Following their league game at the Etihad, Spurs have a promising set of fixtures to end the season on and are backed to comfortably finish in the top four. The Lilywhites will have to keep the momentum going for the remainder of the campaign, and set themselves up for a strong season next time around.

Man of the Match – Lucas Moura

Lucas’ hat-trick means that he’s the only man who could be given Man of the Match. His goals were taken in expert style and Huddersfield could do little to stop them.